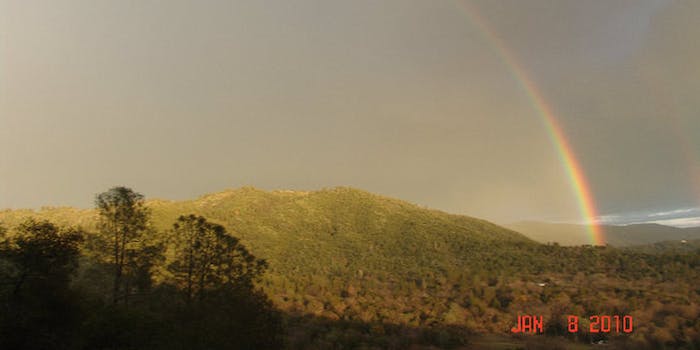 6 years later, the Double Rainbow Guy still wonders what it all means

'It’s like the first video of God someone put on the Internet.'

It’s been six years since to the day that Paul “Bear” Vasquez showed the world what raw, unfiltered happiness truly looks like in his now-infamous “Double Rainbow” video—and he’s right back where it all started.

“I’m sitting in the same exact spot I was when the Double Rainbow video started,” Vasquez said, speaking to the Daily Dot from the living room of his Yosemite farm. In the original video, Vasquez begins recording while he’s still inside his house, after he notices the multi-colored magnificence outside of his window. He moves outside to get a closer look when he’s completely overcome by the sight of two rainbows stretched across the mountain Vasquez’s house overlooks.

“What does this mean?” Vasquez asks, laughing, crying, trying to make sense of what he was witnessing in the January 2010 video.

Forty-two million views later, Vasquez has achieved a level of Internet fame that he says is merely a “side effect” of what he was put on Earth to do.

“It’s like the first video of God someone put on the Internet. You can’t put an ad on God.”

“A lot of people in the beginning were like, ‘Enjoy your 15 minutes of fame,’ and I knew it wasn’t that. … This was something bigger,” Vasquez said. “The whole thing was so I could give a message to humanity. None of it’s about me.”

That message is simple: Love your fellow man, walk gently on Mother Earth, and connect to spirit. And Vasquez certainly conveys that through his YouTube channel, Yosemitebear62, with over 43,000 subscribers.

Vasquez considers himself a natural when it comes to the Internet, sharing his cosmic messages through Facebook, Twitter, and Instagram. Having made videos since the 1980s, he said, when YouTube finally came out in 2007, he immediately saw that as an opportunity to share his work with a larger audience: the world.

“When the video went viral, I had been living as a starving artist, and I was doing it in a sustainable way,” he said. Now that he accrues extra money from ads on his YouTube channel, as well as commercial appearances here and there, Vasquez says his life is “99 percent exactly the same. … Everything that’s come has been just a bonus,” including the time he appeared in a SmartWater commercial with Jennifer Aniston. “I got to hug her,” he said, laughing. “That was pretty good!”

Still, despite the little ways he’s been able to monetize his videos in these past six years, he still considers the Double Rainbow his “gift to humanity” meant to be seen without the burden of advertising.

“The video is me understanding I’m in the presence of God,” he explained. “So it’s like the first video of God someone put on the Internet. You can’t put an ad on God.”

And Vasquez’s overall message of goodwill has not been lost in a fog of fame. “A lot of people understand that I was marveling at the beauty and power of nature; that’s why it’s so popular,” he said. “People connect to it on the deepest level.”

Vasquez still finds the beauty in nature the same way he did in 2010. “I open my soul and share it without reservation to humanity. I’m just going to react in a pure, open, and honest way,” he said. Indeed, living outside of Yosemite National Park, which he calls the most beautiful place in the world, Vasquez can fully appreciate the world around him.

“I can only do that because I live—I mean, you’ve seen the video—that’s my front yard. I’m looking at that right now,” said Vasquez, referring to the mountain in the Double Rainbow footage. “When you live like that, it really changes you. … It really opens you up.”