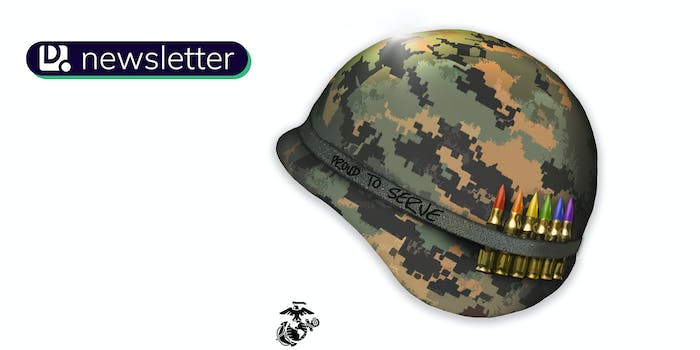 It’s Pride Month, so that means there’s always cringey tweets… and we’ve got an early frontrunner for one of the worst.

After that, our Culture Editor Tiffany Kelly writes about the ramifications of the Depp-Heard trial in her “This Week On The Internet” column. Also, don’t forget to scroll down a bit to find out her pick for meme of the week.

CRINGE: Embarrassing Pride Month tweets are nothing new, but the United States Marine Corps are already a contender for the cringiest post. On Wednesday the Marines tweeted in support of pride, but included a helmet that had rainbow colored bullets.

CALLED OUT: Numerous celebrities are facing backlash online for publicly expressing their support for Johnny Depp in the wake of a verdict being announced in the defamation case between him and former spouse Amber Heard. Many people online have spotted Instagram likes from celebrities on posts celebrating Depp after the verdict.

STAR WARS: Haven’t caught up yet on the latest episode of Obi-Wan Kenobi? Well, you are in luck, our Culture Reporter Gavia recapped the third episode of the new series. (The post has spoilers for the episode, so if you haven’t seen it be sure to check out the recap after you’ve watched it!)

The ripple effect of the Depp-Heard verdict

On Wednesday afternoon, after millions watched the verdict in the Johnny Depp-Amber Heard defamation trial announced live, the discourse began.

First came the gleeful celebrations from Depp supporters—which included conservatives—after the jury found that the actor was defamed in an op-ed article that Heard wrote in 2018 in which she referred to herself as a “public figure representing domestic abuse.” Depp was awarded more than $10 million, while Heard received $2 million for a countersuit. Then people began to discuss the ramifications of the verdict.

If someone can be sued for a piece of writing that does not name their alleged abuser, will that stop some people from writing about sexual assault and domestic abuse, among other topics?

That is what people are worried about. “Precedent is now set in the US that even if you don’t name your abuser in a piece of writing and have evidence of abuse, you can be sued for defamation and lose,” @nerdjpg tweeted. “We are seeing the unraveling of the Me Too movement and victims will suffer for it,” Alejandra Caraballo (@Esqueer_) wrote.

There were dozens of other tweets this week about the Depp-Heard case effectively silencing survivors of abuse. “[T]his will have ripple effect for years,” wrote Alison Turkos in a Twitter thread on the subject. “Before survivors speak they will question ‘will this result in a defamation suit’’ and that’s not free speech, that’s silence.”

The Me Too era invited abuse survivors, particularly women, to come forward with their stories. Social media became flooded with people talking about incidents of assault, abuse, harassment, and microaggressions. But there was also a strong backlash to the movement from people worried about it going “too far.”

Now, Me Too is being used as a talking point for the trial—which the official Twitter account for the movement called a “toxic catastrophe.” The last few weeks turned a defamation trial into a TV show. People memed it and recapped it as if it was pure entertainment. “The absolute virality of this case, and the broad swath of people who participated in it, is revealing. It means that the memeification of Heard, the way she was turned into an online super-villain, could happen to any woman,” wrote Jessica Valenti.

We’re already seeing one negative effect of the verdict: the internet is eager to tear another woman apart.

Social posts are naming Megan Thee Stallion, Evan Rachel Wood, and other celebrities who have come forward with accusations against a man as the “next” Amber Heard.

A smarter way to drink water

It’s time to ditch the plastic for something better for you and the environment. LARQ is a state-of-the-art bottle that cleans itself and purifies the water inside. Its award-winning design uses innovative technology to instantly purify water with UV-C LED light, so you can sip on crisp and delicious water. Try LARQ to experience the delicious taste of brilliantly clean water.

🍾 Now this is quite the find. A woman found a $4,000 bottle of Dom Perignon champagne for $4 at an estate sale. While she easily could have flipped the bottle for quite a profit, she instead decided to crack it open and taste it.

📌 Dating online comes with many obstacles, but one user who claims to be a retired detective claims that sending photos to people can reveal metadata including your location.

🎵 A woman was filmed allegedly crashing the set of a music video, and was immediately dubbed a “Karen” by people online.

🎮  G4 is back! Here’s how you can stream the relaunched gaming network dedicated to everything video games, comedy, creators, and culture.*

🎤 Liam Payne is facing swift backlash from One Direction fans after he opened up about some of the members of the band, revealing some of what went on behind the scenes.

🥝 TikToker and model Challan discusses cosplay, social media fame, and the Crib Around the Corner. Sign up for Passionfruit, the Daily Dot’s weekly creator economy newsletter, for more coverage.

🌱 A landscaping business owner shared a video recording on TikTok of his call with a man who gave him a bad Google review. Viewers said it was a great example of a business owner/client relationship.

✒️ A TikToker says a tattoo artist refused to work with him after he asked to see examples of his work on dark skin.

📜  When you think of the early days of the internet, what does that look like to you? In “The Lost History of the Internet” the Daily Dot explores the online communities and events that shaped us.

Now Playing: 🎶“You Spin Me Round” by Dead or Alive🎶