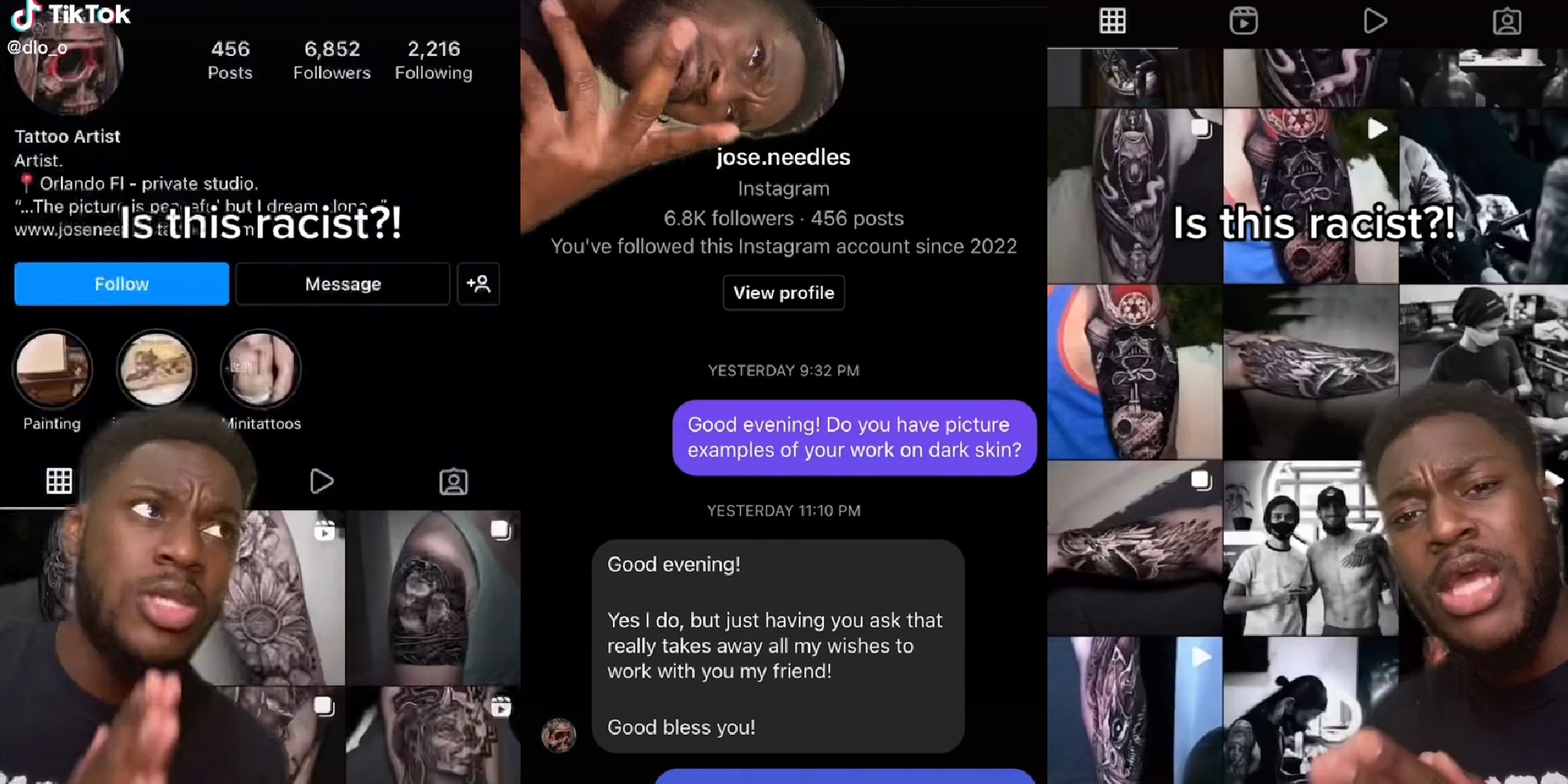 ‘Is this racist?’: Black man asks tattoo artist for examples of his work on dark skin. The artist refuses to work with him

'Did I say something offensive? Or am I the victim?'

A TikToker says that a tattoo artist refused to work with him after he asked to see examples of his work on dark skin.

In the video posted by TikToker Dlo (@dlo_o) on Tuesday, he says that he was looking for a tattoo artist in Florida and reached out to Jose Needles on Instagram after admiring his tattoo style but noticing that he didn’t have any example pictures of Black clients.

He shows a screenshot of an Instagram direct message thread between him and the artist in which he asks, “Do you have any pictures of your work on dark skin?”

In the screenshot, Needles responds, “Yes I do, but just having you ask that really takes away all of my wishes to work with you my friend!”

In the clip, Dlo asks, “Help me understand this y’all. Am I tripping? Did I say something offensive? Or am I the victim?”

The video has amassed over 654,000 views as of Wednesday, with viewers flocking to Needles’ Instagram page to blast him for his response to Dlo.

“So basically you don’t work on darker skin tones?” one user asked.

“As an artist, it’s your call who you do and do not tattoo no matter the response, but I think it was more your response that has people in an uproar!” another wrote.

In a follow-up video, Dlo shows another message from Needles that says, “Most of my actual canvases have dark skin tones. Sorry man, I get that you got to ask to your potential artist but you are not a potential canvas for me. Sorry that you misunderstood. I am not ‘offended.’ I am just not interested on work with you.”

@dlo_o Reply to @fabricevalentin Why Jose so pressed if he not doing anything wrong?? #tattoo #tattooartist #part2 ♬ original sound – Twin

Dlo also claims that Needles is “deleting comments” on his page to avoid criticism and that he was blocked. Needles’ Instagram page has since been put on private.

In an Instagram story on Tuesday, Jose Needles shows an example of his “work on dark skin” in response to criticism, but some commenters on TikTok say that the client was only “tan” and has “medium-toned skin.”

“He got one caramel colored arm on his story talking about ‘my work on dark skin canvases,'” one commenter wrote.

“Nahhh what got me is how he’s tryna post ‘darkskin’ work on his story after the fact and the people not even dark skin,” another said.

Others called out his statement that “most of [his] actual canvases have dark skin tones,” noting that if that is the case, he purposely does not include them on his public portfolio.

“He understands why you have to ask but won’t do work on you because you asked ?? He mainly works on dark skin tones but only posts light skin tones?” one user commented.

“I went to his page and he’s posting black ppl on his stories. Why not on the main page?! There wouldn’t have been a question asked,” another wrote.

“So most of his canvases are dark skin but they’re absent from his page which essentially acts as his portfolio but then won’t show an actual dark skin,” a third added.

In a comment on his Instagram page, Needles wrote that the reason he rejected Dlo as a client was because he “[does] not respond to inquires through DM.”

The Daily Dot reached out to Dlo via TikTok comment and to Jose Needles via email for comment on this story.