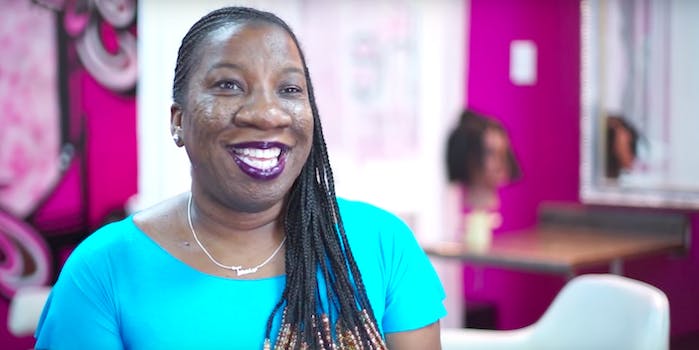 Don’t forget Tarana Burke, the activist behind ‘Me Too’

Amid the social media campaign, a forgotten hero.

If you have a Facebook, Twitter, or Instagram account, chances are high you’ve scrolled through many posts containing the phrase “Me Too” this week. What you probably didn’t know, however, was the actual origin of the phrase—coined years prior by a Black woman whose name seems to be left off of the movement entirely.

The viral posts gained traction soon after the horrific allegations against Harvey Weinstein were made public, causing a domino effect for many in Hollywood to speak out against sexual assault. On Saturday actress Alyssa Milano spurred the action into a social media event, encouraging sexual assault survivors to respond to her post with two words: Me Too. From there replies went viral.

If you’ve been sexually harassed or assaulted write ‘me too’ as a reply to this tweet. pic.twitter.com/k2oeCiUf9n

While this movement is shedding light on an important issue, once again, a Black woman is not getting credit where it’s due. Media outlets were quick to praise Milano, when they really should have commended Tarana Burke, founder of the Me Too movement which began around 10 years ago, according to CNN. Journalist Britni Daniels noticed “Me Too” posts flooding her feed Sunday night, and tweeted about the true crusader behind the phrase to set the record straight: “Shout out to my girl @taranaburke who has been advocating for assault victims & saying #MeToo for years.”

The tweet also included a video of Burke, speaking at a public event. “For those who are ready and able, standing up and saying, ‘Me Too’ can be a deeply cathartic experience,” Burke said in the clip.

Shout out to my girl @taranaburke who has been advocating for assault victims & saying #MeToo for years. https://t.co/myOqjWJKx2 pic.twitter.com/0c4grmUOju

The 44-year-old activist spoke to Ebony on Monday, saying she did not mean for these words to be a viral campaign or hashtag used in the moment but easily forgotten in the future.

“What’s happening now is powerful and I salute it… The power of using ‘me too’ has always been in the fact that it can be a conversation starter or the whole conversation—but it was us talking to us,” Burke said.

That “us” is women of color, who seem to be disregarded or ignored from this recent #MeToo frenzy entirely. Black activist Ashley C. Ford recently published an essay on Refinery29 penning her frustration surrounding protests that continually leave women of color out of them. Ford states she didn’t feel compelled to boycott Twitter in response to Rose McGowan’s momentary suspension after tweeting about Weinstein, Ben Affleck, and Jeff Bezos.

“Where was the boycott for ESPN sports journalist Jemele Hill when her employer suspended her from her job citing a vague social media policy? Where was the boycott when actress and comedian Leslie Jones was harassed by trolls to the point of deleting her account for months? Why is there never a boycott of platforms attached to the mistreatment or outright abuse of the women of color who consistently speak up for all of us?” Ford wrote.

Others on the platform agreed with Ford as well, using the hashtags #BoostWOC and #WOCAffirmation.

I think I'd rather #BoostWOC today than participate in #WomanBoycottTwitter because so many less privileged women are already silenced.

So when you see sistas asking “Where was the boycott when…?” they are expressing decades-old resentment for being perpetually ignored

On Monday Milano credited Burke for starting the Me Too movement on Twitter.

I was just made aware of an earlier #MeToo movement, and the origin story is equal parts heartbreaking and inspiring https://t.co/tABQBODscE