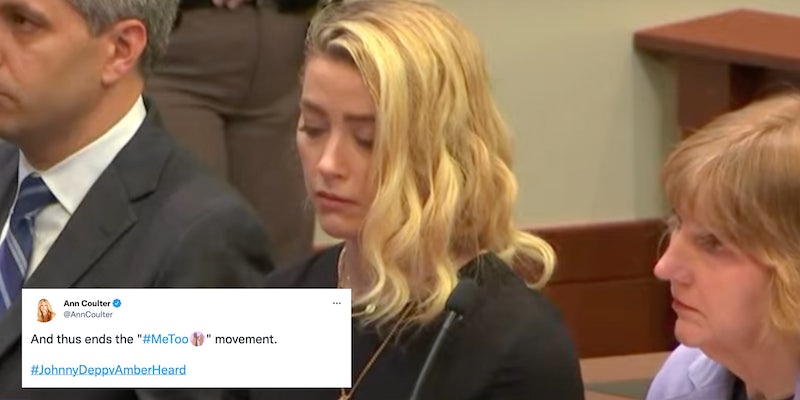 They never liked #MeToo much, anyway.

The defamation suit between former spouses Johnny Depp and Amber Heard came to a close on Wednesday. The two accused one another of defamation and claimed the other abused them. The jury found that both defamed the other, but awarded Depp significantly higher damages—$15 million to Heard’s $2 million.

Conservatives online couldn’t be happier. They’d made the trial into a talisman for the #MeToo movement’s reckoning of the abuse and harassment disproportionately suffered by women at the hands of men.

The right-wing has grown increasingly resistant to the #MeToo movement. To them, Depp’s relative victory is much bigger than a single court case: It’s an indictment of #MeToo itself.

After the verdict was read, they wasted no time dancing on #MeToo’s grave. The chorus of cheers was especially strong from conservative women.

Even the Republican House Judiciary Committee couldn’t resist weighing in on the trial with a meme of Depp in Pirates of the Caribbean.

Similarly, jubilant reactions poured in across right-wing Twitter, with women like Jeanine Pirro and Rep. Marjorie Taylor Greene (R-Ga.) going hard for Depp, despite the number of instances of abuse Heard testified to on the stand.

Within minutes of the verdict, #MenToo started trending on Twitter.

Some even used the hashtag to troll Heard, who posted a statement about her disappointment in the outcome.

It’s unknown whether either party plans to appeal the verdict.