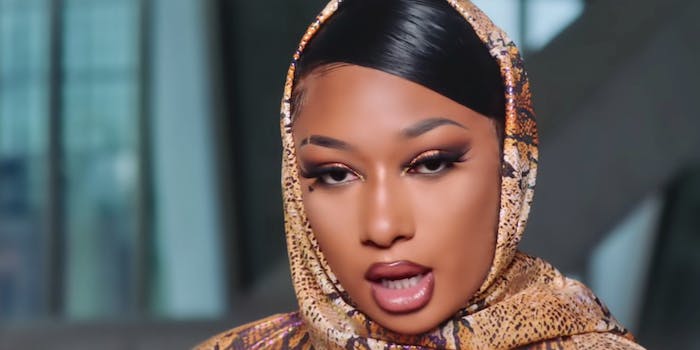 'It’s not funny. There’s nothing to joke about.'

In a tearful Instagram Live video, Megan Thee Stallion shared some details about the injuries she sustained during a shooting earlier this month.

The “Savage” artist was with rapper Tory Lanez on July 12 when Lanez was arrested on concealed weapons charges following a house party in Hollywood Hills. After Megan and Lanez left the party, police stopped an SUV containing both of them. Footage obtained by TMZ shows Megan getting out of the car and backing up toward police with her hands up.

“I was shot in both of my feet,” Megan confirmed on Instagram Live as she struggled to fight back tears. “I had to get surgery to get the shit taken out, to get the bullets taken out, and it was super scary.”

Megan added that the shooting was “the worst experience of my life” and slammed people who used her trauma as fodder for gossip or tasteless jokes and memes.

“It’s not funny,” she said. “There’s nothing to joke about. It was nothing for y’all to start going and making up fake stories about. I didn’t put my hands on nobody. I didn’t deserve to get shot. I didn’t do shit.”

The “Hot Girl Summer” rapper also said that despite the physical and mental anguish she endured, it could have been much worse.

“Thank God that the bullets didn’t touch bones,” Megan said. “They didn’t break tendons. I know my mama, my daddy, my granny had to be looking out for me with that one.”

Megan did not name any names in her video. She similarly declined to do so in a July 15 Instagram post, where she said she “suffered gunshot wounds, as a result of a crime that was committed against me and done with the intention to physically harm me,” which she wrote to “set the record straight” on early reports about the shooting.