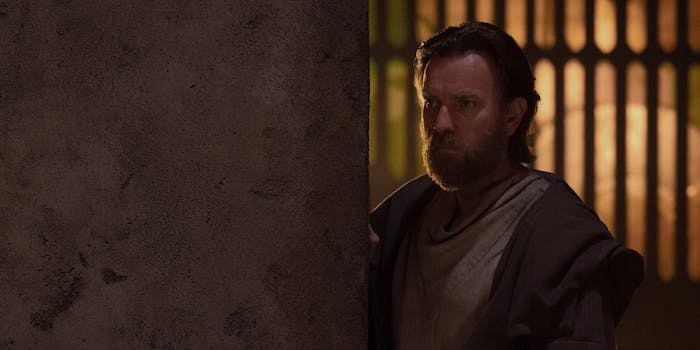 Leia's optimism is a perfect counterpoint to Obi-Wan's cynical attitude, depressed after the fall of the Jedi.

Prior to his avuncular role in A New Hope, Obi-Wan always thrived as the conservative half of a double-act. First as the by-the-book counterpart to Qui-Gon Jinn’s maverick attitude, then as the smug master overlooking Anakin’s secret rebellion, and now as a long-suffering buzzkill opposite young Leia’s free-spirited optimism.

Disney+’s Obi-Wan Kenobi makes some obvious choices for Obi-Wan’s Tatooine period, but there’s nothing wrong with a little obviousness in Star Wars. In addition to his grief over Anakin’s downfall, Obi-Wan feels hopeless about the fall of the Jedi. He always trusted the system, whether it was the Republic government that became Palpatine’s Empire, or the flawed infrastructure of the Jedi Order. He never internalized the outsider spirit necessary for rebellion.

For wholly understandable reasons, Obi-Wan is now in his flop era. His efforts to protect Leia are noticeably incompetent and unheroic, failing to provide a comforting presence or deliver any of the impressive Jedi skills that Bail Organa undoubtedly expected. Obviously, it’s risky to use the Force in public, but you begin to suspect that Obi-Wan is using discretion as an excuse for inaction. Dominated by negative emotions, he’s lost his connection to the Force.

As with the first two episodes, there are points where the production design feels surprisingly sparse and low-budget. Even with an A-lister at the helm, Disney prioritizes easy nostalgia over high-quality writing or (more importantly for Star Wars) visual worldbuilding. Compare this, for example, to Apple TV+’s Foundation. Filmed for approximately half the price, that show actually does look like an epic sci-fi blockbuster, rich with glorious costumes and dazzling, immersive locations. Meanwhile, Ewan McGregor spends most of his time on boxy sets in the California desert or standing in front of hollow CGI backdrops in Lucasfilm’s LED soundstage.

The main thing these Star Wars shows have to offer is access to beloved legacy characters. Which, to Obi-Wan Kenobi’s credit, is proving more fruitful here than in Boba Fett or The Mandalorian.

Young Leia’s precociousness is very fun, foreshadowing her future as a commander with airtight self-confidence. While Luke’s Force powers made him a genius pilot, Leia’s strengths lie in psychological insight. Raised among politicians, she’s sheltered enough to feel immune to life’s dangers, yet primed to understand complex social situations. Her friendliness and bravery are a perfect counterpoint to Obi-Wan’s cynicism, as Darth Vader’s forces close in.

Traveling to the planet Mapuzo, Leia and Obi-Wan are saved from Imperial arrest by a proto-Rebel agent named Tala. She runs an underground escape route for Jedi and other dissidents, but when the Inquisitors lead Vader to their hiding-place, Obi-Wan realizes he must sacrifice himself so Leia can flee. At last, we get the Vader/Obi-Wan reunion we’ve all been waiting for.

Despite the relative lack of screentime for Hayden Christensen (so far), this feels like the first true crossover point between Vader and Anakin: The looming, fearsome presence that haunts the Original Trilogy, and the volatile youth whose journey was shaped by Obi-Wan. It’s somewhat anticlimactic for this long-awaited confrontation to occur beside some piles of gravel at Mapuzo’s spaceport, but in some ways, the lackluster scenery works in its favor. Obi-Wan isn’t capable of a Prequel-style lightsaber duel, and while Vader is hungry for vengeance, there are hints that he doesn’t want to defeat his old master unless there’s a real challenge involved. He lets Obi-Wan escape at the end of the episode, after all.