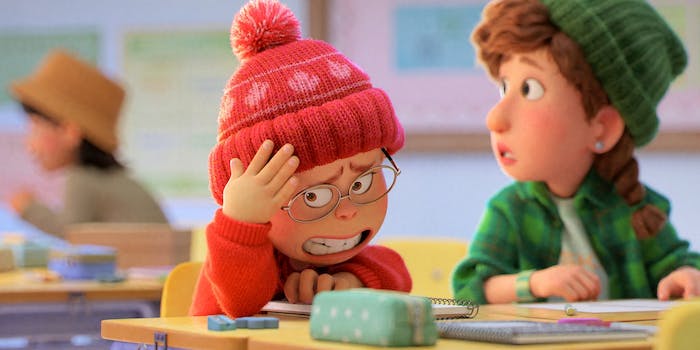 The conversation started because some commenters complained about 'Turning Red's depiction of puberty.

In the three days since Pixar’s Turning Red arrived on Disney+, there’s been a noticeable discrepancy between the film’s critical response and its audience score on Rotten Tomatoes. Right now the critic score is at 95% while the audience rating is at 71%, up from 66% on Saturday. That’s a much bigger gap than recent Pixar films like Encanto and Luca.

Sometimes, this kind of gap just means there’s a difference of opinion between critics and mainstream audiences. But if you look at the Rotten Tomatoes comments on Turning Red, it becomes clear this divide is more politicized. Some viewers were disgusted by the film’s depiction of a 13-year-old girl getting her first period and developing crushes on boys. Others made not-so-veiled complaints about the movie being too “progressive” or “woke.”

Rather than displaying a range of star-ratings from one to five, Turning Red‘s Rotten Tomatoes audience reviews are unusually polarized. And the people who gave Turning Red one star or less mostly share similar gripes: That the film somehow “glorifies disobedience,” or that it’s inappropriate for children because it explores the theme of puberty. These comments often reflect a very conservative attitude, using words like “sinful,” “smut,” and “obscene” to describe a PG-rated Disney/Pixar cartoon.

These responses went viral on Twitter over the weekend, sparking a conversation about the film’s relatability. It’s clear that some people were very uncomfortable with Turning’s subject matter (an opinion that often had sexist and racist undertones), while others saw it as a sympathetic celebration of 13-year-old life.

The word “cringe” comes up a lot in discussions of Turning Red. Everyone finds puberty embarrassing, and the way people process that embarrassment has a big impact on how they respond to this movie.

In the negative comments, there’s a recurring sense of disapproval and disgust toward Mei (the film’s protagonist) for getting her period and having crushes on boys. Meanwhile, the people who love Turning Red display a more nostalgic and affectionate view of adolescence–particularly the “cringey” behavior that others found too embarrassing to enjoy.

Mei draws fanart about her crush, and is obsessed with the fictional boyband 4*Town. Her perspective is partly inspired by the experiences of writer/director Domee Shi, and is evidently relatable to many viewers. So while those one-star Rotten Tomatoes commenters complained that Turning Red contains unsuitable content for a PG-rated movie, others were quick to argue that it’s a fun, authentic depiction of early teenage life.

Like the misogynist backlash against Captain Marvel in 2019—an issue that led Rotten Tomatoes to reconfigure its rating system—this polarized response is rooted in prejudice. There’s nothing wrong with hating a popular movie, but Turning Red‘s most vocal haters aren’t really arguing that the film is “bad.” They’re specifically angry about a Disney movie acknowledging the existence of puberty, and exploring that story from the perspective of a Chinese-Canadian girl.