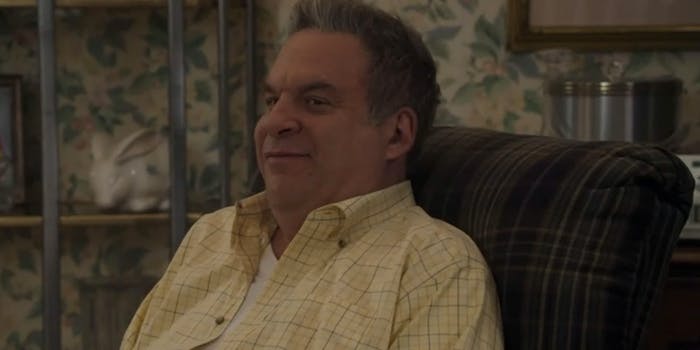 The episode aired a couple of weeks ago, but it's only gone viral now.

When an actor is no longer part of a TV show, the show is left with a few options; they can recast the role or they can kill off that character. Or, as the ABC sitcom The Goldbergs has opted, a show can use existing footage to digitally insert the character into scenes—a result that is kind of horrifying to see play out.

Jeff Garlin, who played patriarch Murray Goldberg on The Goldbergs for the past nine seasons, suddenly left the long-running sitcom in December after an HR investigation into multiple complaints of inappropriate on-set conduct, a departure that was said to have been mutual between Garlin and Sony TV. According to Variety, The Goldbergs was in the middle of shooting the 15th and 16th episodes of its planned 22-episode season and landed on using a blend of existing footage of Garlin (such as unused takes), dialogue delivered off-camera, and his double for behind-the-head shots to have Murray Goldberg appear in the rest of the season.

Now, what did that look like? If The Goldberg’s 15th episode this season, “The Wedding,” is any indication, you can tell something is off with Jeff Garlin. The episode aired on March 2, but it wasn’t until nearly two weeks later that the visuals caught notice outside of The Goldbergs’ primary audience.

The scene takes place late in the episode after a series of events leads to Erica (Hayley Orrantia), one of the Goldberg kids, getting married in the family home. She’s surprised by the low-key (but perfect) ceremony that her family set up for her. Both Murray and Beverly Goldberg (Wendi-McLendon-Covey) are by her side, but we don’t see Murray speak while his face is on-camera; all of his dialogue comes either when we only see the back of his head or he’s entirely out of the frame. More transitional shots, such as seeing Erica being walked down a couple of stairs, feel off because Murray is in one shot but completely missing from the next.

And the result is a blend of the uncanny valley and editing that makes the physical omission of Garlin that much more jarring.

It didn’t take long at all for people to place a shot of Garlin alongside other questionable CGI imagery such as a screengrab of Catherine Keener from The Adam Project, a shot from an early Harry Potter game, and Nancy Marchand from her final episode of The Sopranos.

The Sopranos, which digitally inserted existing footage of Livia Soprano (Nancy Marchand) into a single scene in “Proshai, Livushka,” a season 3 episode that aired in 2001, was something of a special case. Marchand had died in 2000 before and creator David Chase wrote a scene using existing dialogue spoken by Marchand for people who’d never seen The Sopranos before and might be confused about why Tony Soprano had issues with his mother. The scene, technically speaking, hasn’t aged well, but it’s brief: Livia dies off-camera soon after. And with another example, the CGI insertion of a young Mark Hamill into The Mandalorian and The Book of Boba Fett was more about making Luke Skywalker look as much as Hamill as possible.

Others instead brought up the possibility of The Goldbergs continuing the tradition of using CGI to keep Garlin in the show for years to come.

“I sort of love that The Goldbergs is such a square show that it’s taken nearly two weeks for the CGI Jeff Garlin revelations to reach Twitter,” Ernie Smith noted.

The Goldbergs hasn’t been canceled or renewed for a 10th season (Garlin, before his departure, told Vanity Fair that he didn’t think it would go on beyond season 9), so it’s unclear how exactly the show would handle that character going forward. But if this one episode is any indication, the longer The Goldbergs goes on with a CGI Garlin, the more it’ll be mocked and memed.