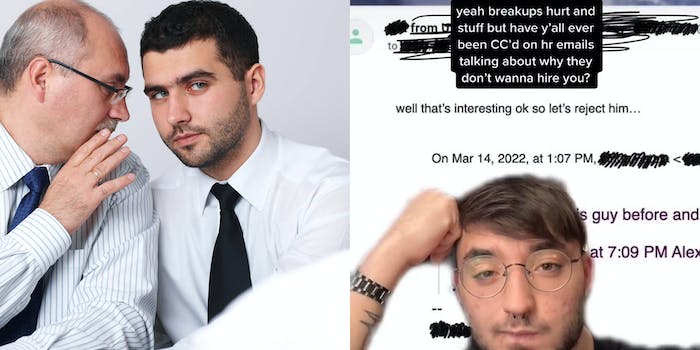 ‘ok so let’s reject him’: TikToker CC’d by HR in email about how they don’t want to hire him

'I wish I got emails like this bc at least I'll know WHY I WAS GHOSTED.'

Modern job hunting is a deeply frustrating thing. Even if you have a degree and other qualifications, you might have to apply for hundreds of listings before getting an interview. And it seems to be increasingly rare for any applicants or interviewees to hear back unless they are the person selected for hiring, leaving people in a constant state of wondering.

But one TikToker just learned the hard way that there might actually be worse things than being kept out of the loop.

Alexander (@noveltygay) shared a screenshot of an email he received from a company he applied to work with and who apparently decided he wasn’t the right fit. Only, they didn’t thoughtfully direct this email toward him so that he knew to move on—they accidentally CC’d him on an internal email talking about why he shouldn’t get the job.

“Yeah breakups hurt and stuff but have y’all ever been CC’d on hr emails talking about why they don’t wanna hire you?” he wrote.

In the email itself, all that’s visible is the final response in the chain, which reads, “well that’s interesting ok so let’s reject him…”

The TikTok clip received 1.1 million views in the 15 hours it’s been live.

Alexander’s unfortunate situation prompted other viewers to share similar mishaps they’ve experienced with companies who need to get a better grasp on how email works.

“Or accidentally being CC’d in an email talking about how much the execs are gonna get as bonuses for cutting everyone’s hours,” wrote @septumdeviatedaf.

“Today someone from our legal team emailed ME making fun of how I worded my email thinking it was someone else,” @sophia_duff4 chimed in.

Another viewer mentioned HR accidentally emailing their entire company about deciding to fire an employee, and @lazyspice666 said they once were accidentally CC’d on an email rejecting them for having a nose ring and looking “better in pictures.”

At least one viewer expressed that they would rather things go like this than have interviewers just never follow up about the job at all. “I wish I got emails like this bc at least I’ll know WHY I WAS GHOSTED,” said @cespedegg.

Everyone was clamoring to find out more about the remainder of the email chain, and why, exactly, they opted not to give Alexander the job, but the TikToker has yet to update. The Daily Dot has reached out to him via TikTok comment.