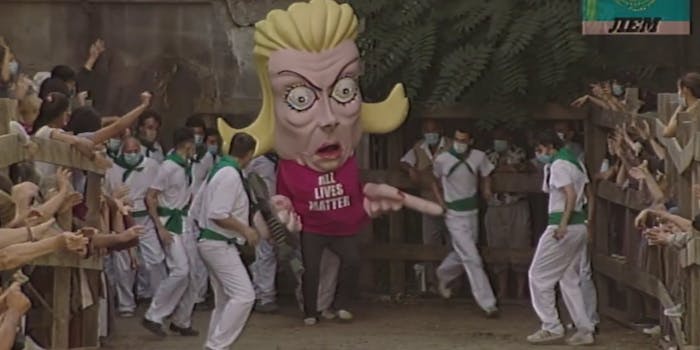 The long-awaited sequel to Borat, Borat Subsequent Moviefilm: Delivery of Prodigious Bribe to American Regime for Make Benefit Once Glorious Nation of Kazakhstan, is a gold mine when it comes to the hyper-specific mockery of things currently going on in the United States. It’s hard not to laugh and groan simultaneously throughout the entire movie, as it nails the selfish and patriarchal failures of modern American society at a rapid pace, all the way up to the very final scene.

The final scene shows Borat and his daughter Tutar broadcasting live from the updated version of Kazakhstan’s “Running of the Jew,” which has now turned into “The Running of the American” in light of Borat learning to be less anti-Semitic.

This new event features a caricature of a maskless white man in a “Make America Great Again” hat and a “pandemic” T-shirt, spewing germs all over the place. He’s followed out by an angry blonde woman carrying a massive gun and wearing an “All Lives Matter” t-shirt.

The two Americans are followed out by a caricature of Dr. Anthony Fauci. He waves a giant needle labeled “vaccine” as the crowd cheers and Borat announces everyone is going to be saved.

Instead, Karen takes her gun—an AR-15 from Walmart, according to Borat’s commentary—and shoots Fauci to death in the street.

“The Americans are victorious in their battle against science,” Borat laments.

The clip exemplifies the way Borat Subsequent Moviefilm manages to strike at the core of certain modern American issues in the most ridiculous way possible, and the internet definitely responded to it.

Other scenes throughout the film get even wilder, in case the Rudy Giuliani controversy didn’t already clue everyone on that. Fortunately, Borat Subsequent Moviefilm is now available to watch on Amazon Prime so we can see all the absurdities for ourselves—sorry, Karens!