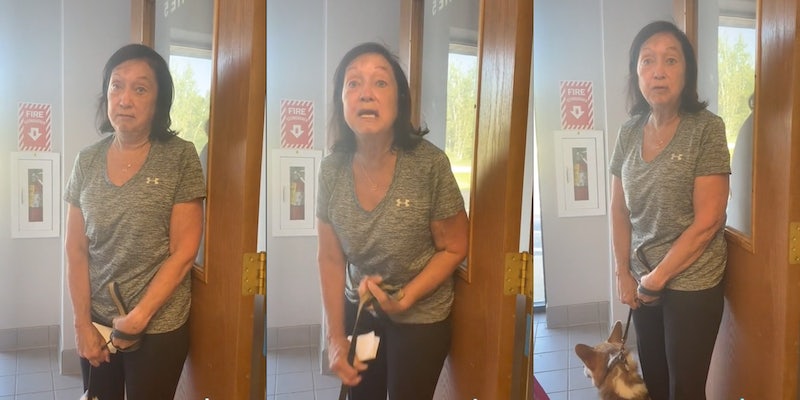 'Poor pup deserves better than that.'

A dog trainer on TikTok says a “Karen” client of hers called the police after she didn’t answer the client’s text messages fast enough.

Lindsay Johnson-Arro, known as @packleaderlinds on TikTok, posted footage of her conversation with the client, saying that the Karen called her “untrustworthy” for not answering her messages within 12 minutes.

Johnson-Arro explained to the Karen that she works all day with all of her clients’ dogs so she doesn’t have time to “sit on her phone and do messages and phone calls.”

The Karen supposedly apologized, but Johnson-Arro claims that didn’t stop her from freaking out again over response time. Johnson-Arro then explained she did not respond to the Karen’s texts within 20 minutes and the client called the police on her. After this, Johnson-Arro decided that she would not be training the Karen’s dog.

The Karen cuts Johnson-Arro off as she mentions the police call, saying “just board him” (the dog). Johnson-Arro firmly restates that she would not train the client’s dog.

Johnson-Arro gave her the options of either boarding the dog without training or taking him home right then and there. She reiterates to the client that she cannot work with her. After that, the Karen begged her to train the dog for about 10 more minutes, but Johnson-Arro refused.

Another cut of footage shows the Karen cussing Johnson-Arro out, calling her “manipulative” and demanding to have her dog back.

“I will make sure that everyone knows that you are fucking manipulative,” the Karen snapped after getting her dog back. Once she realizes she’s being recorded, the Karen says calmly, “You have been incredibly rude.”

Then she demanded that Johnson-Arro stop recording, saying she didn’t give permission to be photographed or filmed. Her tone shifted back and forth between indignation and persuasion.

“You are a little manipulative bitch,” the Karen said after Johnson-Arro refused to stop recording.

TikTok viewers were quick to call the Karen out for her back and forth mood and overall bad attitude.

“Dang… you can straight up see the evil in her eyes,” one viewer commented.

Another user said, “That’s actually scary how her demeanor changes so quickly when she realizes she’s being filmed.”

Others defended Johnson-Arro for filming the Karen and refusing to back down.

“She’s standing inside a private business and has the gall to say it’s invasive to film her,” one person commented with a laughing emoji. “Ma’am that’s not how it works.”

Another said, “Damn I can’t believe how well you handled that awesome job and she was definitely in the wrong.”

Some folks pitied the dog for being stuck with such an owner.

“Poor pup deserves better than that,” one person said.

Johnson-Arro did not respond to the Daily Dot’s request for comment.