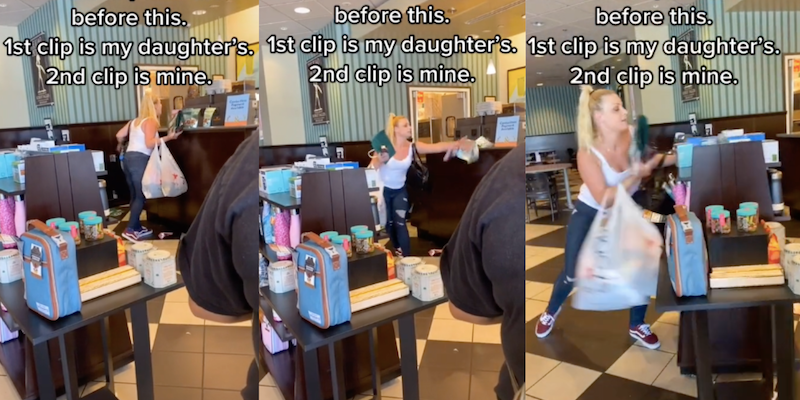 Another Karen has been caught on camera, this time at a Barnes & Noble Cafe. The video showed the woman having a violent meltdown as she hurled slurs and cuss words at the employees behind the counter.

It’s unclear what started the yelling, but at the beginning of the video, TikTok user @jenmarz caught the Karen screaming at the cafe employees to return her money “Give me my fucking money or my drink,” she can be heard saying in the first of two clips stitched together. She continues to yell as she knocks a cup off of the counter.

In the second clip, an employee, presumably the manager, comes out to get the woman away from the counter. He is seen backing her away from the area but she maneuvers around him to continue to berate the employees.

As she storms off, she knocks over more cups on display in the store and tries to take down the entire display stand on her way out.

The video has been viewed over 315,000 times since it was uploaded on Sunday. The user who uploaded the video posted a follow-up video answering some frequently asked questions she was seeing in the comments section.

“Why didn’t you call the cops? Where was security?” the text reads in the video. “There was a substation inside the mall & the managers most likely called them.”

The text said it’s still unclear if she was arrested because the same Karen was allegedly seen in another TikTok from the same day, berating workers in a drive-thru.

There was also the question of what triggered her to act out like this, to which the user responded saying, “Doesn’t matter, nothing justifies what occurred.” She continued, “But for those still curious, [I don’t know] if anything happened in the cafe beforehand but this incident occurred after she had been walking around and was confronted for taking some bags from behind the main [Barnes & Noble] register. She’s yelling about a drink but she couldn’t have ordered unless it was way before.”