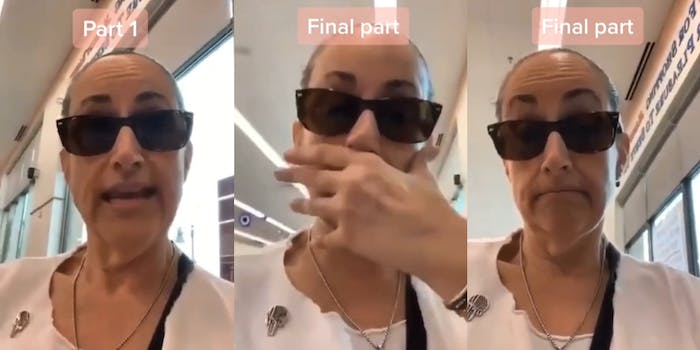 'I have civil liberty rights.'

Another day, another viral Reddit video of a grocery store Karen who is unhappy. This Karen, like many before her, didn’t want to wear a mask in a Northeast grocery store. The woman, for reasons completely unrelated, declared that “all lives matter.”

The video started with the woman waiting for a manager after being told to wear a mask. She’s wearing both a Christian cross necklace and a Punisher skull pin, signifying support for the “blue lives matter” movement.

“I have civil liberty rights. All lives matter. My life matters. What? They want me to drop dead wearing a goddamn mask? I want the manager. I’m disgusted. Americans need to speak up.”

Yes, of course. Then, a woman speaks up that the masks are for protection. Then, she nonsensically goes in on a Black Lives Matter protest and reiterates that “all lives matter.”

Disregarding the science from every credible medical organization, this Karen, who just claimed she would fall out while wearing one, cares strictly about how she feels about the mask: “But I feel as though if I’m healthy, I don’t need to wear a mask. That’s how I feel.”

As commented by u/Dr-Satan-PhD, for people like her: “It was never about facts, and it was never about freedom. It has always only been about feelings. These people need to feel like they are fighting the ‘liberal agenda,’ and refusing to wear a mask during a pandemic puts her at odds with her ideological enemies. It [makes] her feel like she’s fighting some culture war.”