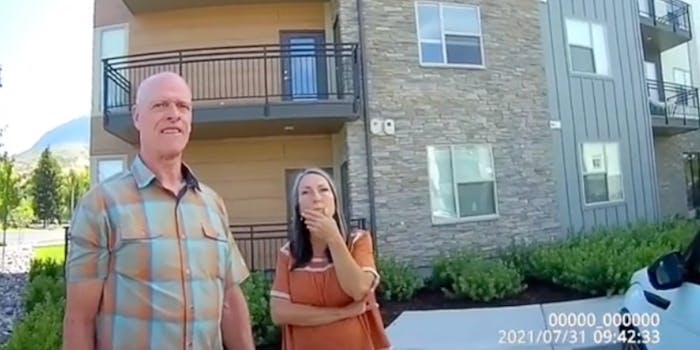 A parking enforcer documented his encounter with a particularly aggressive Karen at an apartment complex yesterday in a viral TikTok that has amassed over 2 million views.

The video starts with TikTok user @parkingenforcer approaching a woman and her husband as they wait by her car.

“You are not going to have a happy Saturday, because I am NOT happy,” she says as he approaches.

He tells her that he’s “sorry about that” and her immediate reply of “don’t” makes it clear that there’s already no way to turn this interaction around toward a positive resolution.

The woman is apparently furious because she received a warning and a boot on her car for failing to display a parking permit for her apartment building. After insisting that she has “always put that damn fucking tag” in her car window, she tells the parking enforcer that she forgot this one time because she was out late taking food to friends whose relative had died.

“And I am really mad, when I have a warning,” she says. “I’m giving you guys a warning. I know this is your job, but you better know my car, and you better know who I am. Because I’ll make your life hell. I promise you that. I am so furious about this.”

The parking enforcer tries to walk her and her husband through the process the enforcement company has of looking into cars for any visible permits. As he explains that they can appeal the decision, the woman gets randomly irritated that he is wearing sunglasses, interrupting him to insist he take them off.

She scoffs as he continues, but eventually interrupts again to insist they’re in the shade and it isn’t actually bright.

“Whether I wear sunglasses or not is not a concern,” he says, and again tries to return to explaining how she can get the boot off her car.

“I wish I could see your eyes,” she interrupts again. “Because that’s kind of chickenshit, to talk to me and not take your damn glasses off. Disrespect.”

“I don’t know why my glasses are a problem for you, ma’am,” he calmly replies.

“I don’t know why it’s a problem for you,” she fires back.

The video finally ends with her husband paying the $60 fine to get the boot off the car.

Parking regulations and enforcement tend to be a hot topic, so comments on the video were fairly split when it comes to deciding who was ultimately in the right and who was wrong, but the woman’s bad attitude about the whole thing was hard to skip over.

“Don’t you just love people like this?” asked @alexanderlenden. “‘Do YoU kNoW wHo I aM?’ Don’t care now. Won’t care later. Make sure your permit is visible. No boot.”

“I would 100% ticket her every time if it’s not visible enough. You can’t treat someone like that and expect them to do nice things for you,” added @caseylxynn.

There was also some theorizing happening about her intense aversion to the sunglasses: “Probably mirror glasses and she has to look at her own behavior and she doesn’t like it,” one viewer joked.

@parkingenforcer clarified in the comments that the apartment complex in question originally didn’t have actual parking enforcement, and spent over a year issuing hundreds of warnings to people who failed to keep their parking permit on display.

“They didn’t listen,” he wrote. “We got contracted.”

He also shared that the woman did, in fact, remember to put her parking pass in her window the next night—and yes, he made sure to check.