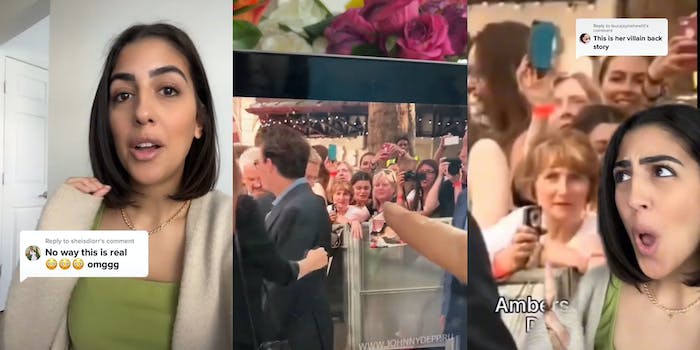 As the defamation trial between Johnny Depp and Amber Heard continues, TikTok blew up with claims that one of Amber Heard’s attorneys, Elaine Bredehoft, is a Depp fan.

TikTokers are pointing to a video that dates back to 2013 and shows Depp arriving to the Lone Ranger movie premiere in London. In 2012, Depp and Heard had reportedly just made their relationship public.

In the beginning of the YouTube video, about 10 seconds in, Depp walks past the crowd, and in the fan section, the woman in question is holding a black camera.

As of Tuesday, one of the postings of the video has over 9.4 million views on TikTok.

“I don’t want to claim that it is her attorney,” says Nuha (@devotedly.yours), a Depp supporter who reposted the video on her own TikTok account, where it received an additional 180,000 views, and has been publicly following the trial. “I don’t know. It just sure looks a lot like her.” (Nuha also recently made waves for attempting to hand-deliver the “Milani evidence” to Depp’s legal team.)

Both the videos were posted earlier in the week. In response to the videos, some TikTokers called the similarity between the fan in the video and Bredehoft “wild.”

For the most part, pro-Depp TikTokers found the old video “honestly so funny tho.”

“That explains the nervous slip ups when speaking,” one TikToker claimed. “She is a fan. This is kinda sad. Wait, maybe it’s on purpose…”

Others, however, disagreed. “I don’t think thats her. Looks similar but IMO every person with that haircut looks alike lol.”