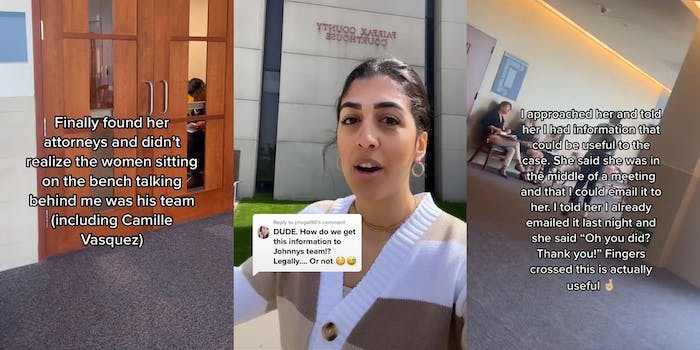 'Hi guys, I'm here at the courthouse. I'm going to go inside right now and try to find his attorney.'

After makeup brand Milani posted a TikTok refuting a claim made in court during the defamation trial of Johnny Depp and Amber Heard, one creator on the platform took it upon herself to ensure the information made its way to Depp’s legal team.

In two videos posted to the platform, TikToker @devotedly.yours shows herself heading to the Fairfax County Courthouse in Virginia to seek out Depp’s legal representation to make sure they were aware of Milani’s video. She refers to it as “the Milani evidence” in the caption.

“Hi guys, I’m here at the courthouse. I’m going to go inside right now and try to find his attorney,” @devotedly.yours says in the first video. “I don’t know how I’m supposed to find them, anybody on his team, but we’re going to try. I’m sure if I ask I’ll get kicked out, but here we go.”

@devotedly.yours says she eventually located a member of his legal team, who she says told her to email any information she had regarding the case to her. @devotedly.yours shared a screengrab of the email she sent to his team.

“Amber’s attorney showed a concealer kit during her opening statement and claimed it was in her purse the entire time she was with Johnny Depp 2014-2016 and that she used it all the time to cover up bruises,” the email reads. “The makeup brand, Milani Cosmetics, just posted a TikTok today claiming the palette actually didn’t exist until the end of 2017. I’m not sure if you can submit new evidence once trial begins or if any of this can be admissible but I think an attorney telling a lie to the jury should be something you should be able to call to question.”

The Daily Dot has reached out to @devotedly.yours via Instagram direct message regarding the video.