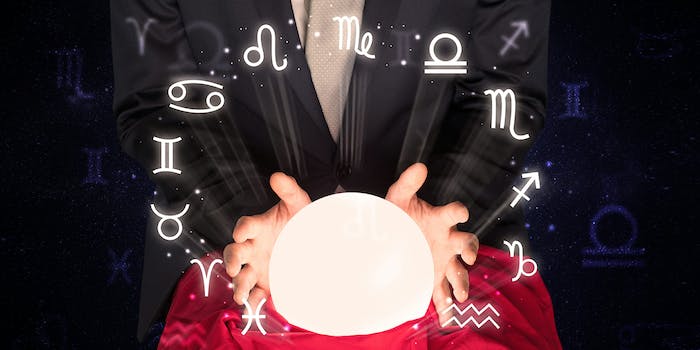 2018: The year astrology memes exploded on the internet

From Aries to Pisces, why all the signs love to be dragged.

If you’re a Leo, you see astrology memes about your love of self-care and selfies. A Gemini? Expect to be dragged for your indecisiveness and propensity for gossip. Taurus memes might highlight your cravings for food or stability.

No matter your sun sign—or whether you know or care that your sun sign is only part of your personal birth chart—you’ve likely encountered some astrology memes on the timeline. And no, it’s not just your detail-oriented Virgo mind that’s suddenly seeing this zodiac-specific content everywhere.

Whether it’s because millennials are trying to find structure in a chaotic world, or just because we love to talk about ourselves, astrology memes undoubtedly exploded in 2018.

Astrology itself, of course, is nothing new. Its practice has existed in different forms for thousands of years, and world leaders from Alexander the Great to Queen Elizabeth I were advised by astrologers. Then scientists during the Enlightenment ruled a fate written in the stars unprovable, and modern interest in the mainstream was relegated to bite-sized horoscopes in magazines or newspapers. In the much shorter history of the internet, astrology content was long sequestered to obscure blogs and crude websites with link maps as complicated as the galaxies themselves.

But as Julie Beck wrote for the Atlantic earlier this year, astrologers have noticed a resurgence of their craft in the past five years not unlike the New Age boom during the 1960s and ’70s. The revitalized interest is even somewhat measurable: Tumblr just ranked the zodiac signs in order of popular interest (based on search) on its site, and editors at both Broadly and the Cut told the Atlantic their sites were seeing increased traffic on horoscope pages by January. Astrology apps like Co-Star and the Pattern have been searched more frequently on Google.

On social media, both professional astrologers and amateur hobbyists are churning out waves of content. Young people, in particular, have tapped into a way to make astrology click for a mainstream audience: Take a popular meme, and slap some universal truths about the signs on it.

From “the signs as places I’ve cried,” to a photo of Reese Witherspoon throwing ice cream labeled with Aquarius traits, to dismal jokes about mercury in retrograde, the content is seemingly endless. The brief existence of a “fuck your zodiac” meme even indicated the over-saturation of sign-talk.

The Signs as Places I’ve Cried:

Gang’s all here!! Had fun for those 2 hours where we all pretended to be cocky bitches in public though!! Time to analyze what people we hate think of us!!

As with all meme making, there’s a nuance to the craft. Hally Stewart, a 23-year-old who runs an Instagram account called @happycapricorn_, told me viral astrology shitposting is just like any other comedy form: intangible.

“It’s hard to put your finger on it,” Stewart says. “It’s about how you personally say what you’re saying. It needs to feel fresh to the people that are reading it, but there is such a thing as being too fresh.”

Miranda Feneberger, who runs @mirandasmemecastle, found success when she made bingo card memes for each of the signs. The idea is to screenshot the bingo card, mark the traits you think apply to you, and share it on your own feed to see if others agree with your choices.

“I try to keep it positive,” Feneberger says. “Usually the direction I go in is lighthearted, funny, we’re all laughing about our own flaws and our own weird neurotic tendencies rather than saying something spiteful about another sign.” (Her lighter takes on the signs have drawn more than 16,000 followers to her account.)

Both Stewart and Feneberger said they see the highest numbers of engagement with object-labeling memes, and Stewart said the best memes toe the line of harsh truth and hilarity. In other words, people like to be dragged.

“I think a fair amount of people actually come to be made uncomfortable,” Stewart says. “Like they show up for that tension. They show up to be like, ‘how dare you,’ but then to think about it for a day and be like, ‘I actually see the point you’re making there. I just didn’t wanna see it when you surprised me with it.’”

Stewart, who had amassed more than 50,000 followers on Twitter before recently shutting down her account to ease the pressures associated with running it, says the patterns of the signs even come through in how people react to meme content.

“Fixed signs will tend to be the most sensitive about call-out memes (and call-out memes are always the most popular, so tough luck),” she explains. “Particularly Aquarius and Leo, which if you know anything about astrology, that makes a lot of sense. They’re the most worried about public opinion and being seen as the individuals they are.”

Tauruses and Scorpios, she says, are the most likely to argue with a meme, while Geminis and Capricorns are less likely to take the digs personally. And Sagittarians have their own unique way of dealing with memes.

“This is hilarious to me: The universal response to Sagittarius memes is to retweet but then the comment, ‘rude,’” Stewart says. “Every time. And I’m like, ‘Do you guys know that you all say the same thing about this?’”

Anyone: So I was thinking-
Sagittarius: That you should wake up tomorrow, start a band, quit everything you hate, sleep with anyone you want, & remember the person you gave up being because of some vague social rubric you were told is important?

There are loftier reasons, of course, about why millennials might be turning to astrology. Whether or not it’s because we’re seeking clarity about the world—like Stewart suggests, filling a “spiritual vacuum” left by skepticism about mainstream religions—the memes provide a shorthand for talking about ourselves in a way that’s otherwise challenging.

“It’s like a colloquial dialect or something,” Stewart says. “We can really communicate through it, and I think that a lot of people are finding ways to communicate who they are and what they need and what they want with astrology—even if it’s just to themselves.”

Plus, obviously, the memes are funny. And because they’re tailored to identifiable traits and poke fun at insecurities about everything from dating to career choices, they feel personalized.

“It’s like when your friends make fun of you,” Feneberger says. “It’s like a nice feeling because it’s like, ‘well we’re good enough friends that this doesn’t hurt my feelings.’”