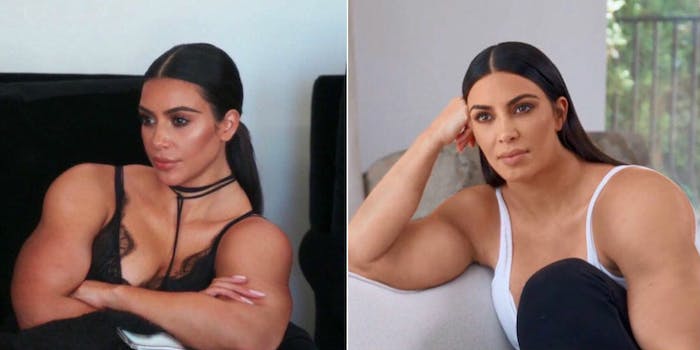 Swole Kylo Ren has nothing on buff Kim Kardashian.

Thanks to Keeping Up with the Kardashians and her omnipresence on social media, the reality TV star has given the internet a lot of material to work with over the years, but you’ve never seen her quite like this. The latest Kim Kardashian meme popped up on Twitter this week—and the haters will say it’s Photoshopped.

The three photos of buff Kim Kardashian were quickly shared across the internet.

Buff Kim Kardashian creates an easy set up for jokes.

The one machine I really wanted to use at the gym today is out of order pic.twitter.com/iYNa0VVqxj

Several people are referring to the newly buff Kim as “Gym Kardashian.”

Why are photos of buff Kim Kardashian so funny? And what inspired the meme? Kim has been working out with trainer Melissa Alcantara, and sharing the progress on her social media accounts. The memes could be a joke about Kim wanting to become the fittest Kardashian. Or they could be a play on Birds with Arms memes. Either way, buff Kim Kardashian is the silly meme we need right now.