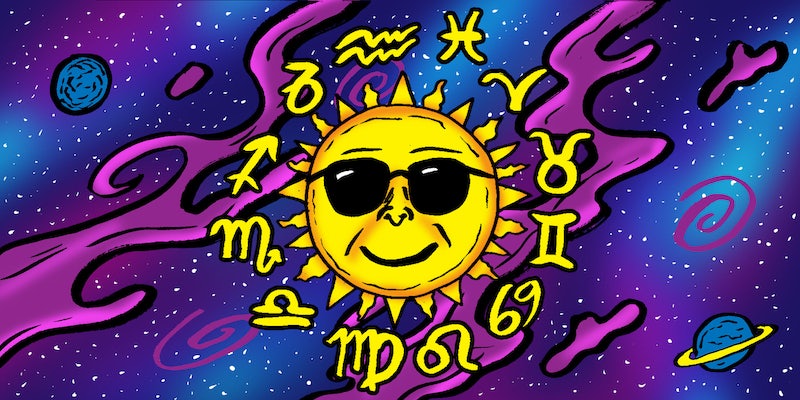 A few weeks ago, I kept seeing the same astrology bingo cards in my social feeds. There’s one for each of the 12 signs of the Zodiac, and the cards all feature brutally honest character traits. The Sagittarius card includes squares for “shouting,” “screaming,” and “yelling.” The Taurus card includes “Netflix and chill but literally” and a “free space for taking 8 naps a day.” My sign, Capricorn, includes the unfair assessment that we have a “trash opinion in memes.” But the other squares on the Capricorn card, such as “cannot ever be wrong under any circumstances” and “logical af,” are, admittedly, correct. The cards are honest and remarkably accurate—for astrology (minus that meme comment).

A 21-year-old living in North Carolina named Jake created the cards and posted them on his increasingly popular Instagram account called Jake’s Astrology. It now has more than 40,000 followers.

It’s easy to see why Jake’s Astrology is so popular. The account combines, well, memes and astrology—two things that the internet loves. Besides the bingo cards, Jake has used SpongeBob memes and celebrity tweets to illustrate the defining traits of each sign. His posts are funny, often savage, and very accessible. Even if you don’t know a lot about astrology—or claim to hate it—you can’t help but enjoy Jake’s Instagram account.

I spoke to Jake (who didn’t want to use his full name) over e-mail about those super popular bingo cards, why Libra is the fakest sign, and his future plans for Jake’s Astrology.

Daily Dot: People seemed to really like the bingo cards for each sign—I saw them shared on several different social networks, including Twitter and Instagram. Did you create them? If so, how did you come up with such spot-on traits for each sign?

Jake: Yes! I’m super proud of them and I made them all myself. There was a moment where I thought a bingo card dragging the signs would be pretty funny, so I found an empty bingo card template on Google and filled them out with the appropriate traits for each sign. From people filling out, reposting, and sharing the Bingo cards on Instagram, my following grew from a little over 800 followers to over 42,000 in about three weeks. I really wasn’t ever expecting my hobby to blast off like that, but I’m thrilled that my content got so much attention and enjoyment from others.

My inspiration for the different traits and characteristics for each sign come from people that I know in real life. My best friend, Sally, inspired many of the Gemini traits, and my boss, Julianna, inspired a huge number of the Virgo traits because she’s a shining example of both the best and worst traits of a Virgo. Each of the 12 signs is associated with specific archetypes, both positive and negative, and I chose to focus more on the negative traits to fill out the bingo cards, making them delightfully shady and entertaining. I ended up with a nice balance of positive and negative traits for most of the signs, after realizing I was really going in on several of them and making an effort to sprinkle in some of their nicer traits as well.

So how did you get into astrology?

Ever since I can remember, I’ve been fascinated with anything paranormal or supernatural. When I was in high school, I was really interested in ouija boards and tarot cards, which eventually led to an interest in astrology. It really caught my attention once I realized the depth and complexity beyond sun signs (the sign that most people are aware of, based on birthday) alone.

About a year and a half ago was when my interest in astrology really peaked and I began spending my free time investing more into knowing everything I could about it. Through using different resources online, particularly social media to connect with others that are interested in astrology, I was able to learn so much in a way that I really enjoyed.

I first created my personal Instagram account a few years back while I was in high school, but in the past three months, I’ve spent time primarily focusing on astrological content, which led to me deleting all my personal content. There isn’t much of a rhythm as far as when or how I decide what to post on the page now. Instead, the ideas occur to me pretty sporadically and I create and post them as quickly as I can. I’ve created a list of different posts and series that I intend to post in the near future, but I’ve realized that the posts are more fun when they’re unplanned. I try to keep the posts balanced and fun, not posting about one sign more than any other, although I’m sure some signs think that I neglect them. I tend to just blast out memes as they come to mind.

Who is the ideal audience for your Instagram account? Is it for people who know a lot of astrology, people just starting to learn about it, or both?

There’s not really an “ideal” audience that I aim to center my content around, and I try to appeal to a wide variety of people by uploading different posts that can teach something about astrology, make someone laugh, or keep everyone up to date on the current astrological forecast. I try to make my posts practical and relatable not only for those who are just finding an interest in astrology but also for people who already have a deeper understanding. My ultimate goal is to entertain my audience as a whole through funny memes and the occasional shady post that drags different signs.

Occasionally, I also make posts specifically focused on more in-depth astrological topics, primarily centered around horoscopes, planetary transits, and cosmic events; the posts that I’ve made recently about the many eclipses, full/new moons, retrograde planets, and planetary movements are all examples. Astrology can be such a broad and overwhelming idea when one first becomes interested in it. I know lots of people have become interested but don’t know where to begin, so I’m planning a full “Astro 101” series and intend to begin posting it soon, which I’m really excited about!

You’re a Libra. What do you think about your sign?

I’m tempted to give a typical Libra response and say that I have mixed feelings about Libras, but that could be true about any of the signs. In general, though, I have nice thoughts for all of the signs because anyone is able to develop the archetypes associated with their sign into really great, positive traits.

I love my fellow Libras so much because of how thoughtful we are. We strive for balance and harmony, especially when it comes to the relationships we have in life. It’s in our nature to be pleasant and reliable companions, and we really love to love people! Libras have a great eye for art and beauty, and we have really lovely and creative imaginations. We can be indecisive when we take too much time thinking about balancing the pros and cons of a choice we have to make, and that can lead to being unable to assert ourselves or make our own choices.

Confidence doesn’t come easy to a lot of Libras, and I’d say Libras are one of the most codependent of the signs because of how much we value relationships. I know its easy for Libras to exist strictly within their relationships with others. Some of the worst Libras are so like this that it can feel like a Libra’s entire persona has changed just based on who is around. Because of that, I personally think that the Libra sign deserves the reputation of being the fakest sign in the zodiac way more than Gemini.

At our worst, Libras’ indecisive nature can devolve into being really flaky, and our chatty, sociable demeanor can turn us into really bad gossips. But at our best, Libras are witty, charismatic, and compassionate, and the best kind of friend to be around!

This interview was edited for clarity.