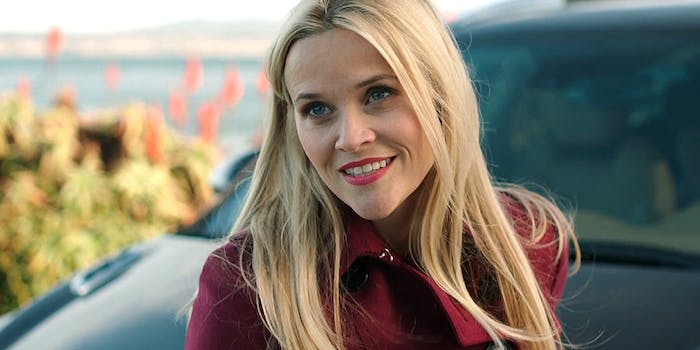 Season 2 of HBO’s hit series Big Little Lies is currently filming, and we’ve been blessed with an uncursed image of Reese Witherspoon throwing an ice cream cone at Meryl Streep.

The show won’t return until 2019, but we at least have this paparazzi photo of Witherspoon’s Madeline Martha Mackenzie in the middle of a heated moment with Streep’s new character Mary Louise Wright, the mother-in-law of Nicole Kidman’s Celeste Wright. There are other photos featuring Madeline’s daughter looking shocked, but Witherspoon clarified the hit was direct.

Since Witherspoon was putting out a “mood,” the internet quickly memed the moment.

When you gotta catch that Meryl Pokemon pic.twitter.com/pP02uDkNpR

The Reese Witherspoon ice cream meme is a perfect metaphor for Brexit. pic.twitter.com/pzxvfW5CpI

BBC drama Killing Eve got in on it too, posting a scene from the first episode in which killer Villanelle gets revenge on a little girl, via her ice cream.

It's all in the wrist. pic.twitter.com/59sm24fwbz

This is the next logical step, after Witherspoon publicly pondered a meme.

This is the second photo of Streep from set, following one posted by Kidman in April.

First day on the set with Meryl and “my” darling boys! #BigLittleLies