9 things you need to know about Valkyrie, the unexpected star of ‘Thor: Ragnarok’

Get to know the unexpected star of 'Thor: Ragnarok.'

Valkyrie has been around for a while in the Marvel comics, but this will be her first appearance in the Marvel Cinematic Universe. If you want to learn all you can about her (and you definitely do), here’s what you need to know.

Valkyrie, as far as Marvel Comics is concerned, made her debut in the early 1970s. But the legend the character is (very loosely) based on goes back centuries. First off, there isn’t actually just one Valkyrie. Valkyries are a group of Norse deities that escort dead men worthy of paradise to Valhalla after they die. Brunnhilde, which the Marvel character is based on, is just one of these entities.

It’s also worth noting that, in Norse mythology, Brunnhilde is part of a complicated love affair where a bunch of people got tricked, died and so on and so forth. 2) Valkyrie has one cool power other Asgardians don’t

Some have criticized Marvel for introducing characters like Thor, Odin, and Loki because they’re ancient myths, not original creations. This may be true, but one doesn’t have to go far to see how much Marvel creators altered the characters after the fact. Much like her fellow Asgardians, Valkyrie gets the benefits of super-strength, incredible fighting abilities, and near-invincibility. But, as a Valkyrie, she also has a sixth sense that allows her to see a “death glow” around people in their last moments.

3) Valkyrie’s origin story was rebooted for the comics As entertaining as it is, Norse mythology can get really, really dark. While comic books have gotten a little grittier and more experimental with time, that doesn’t mean Marvel is open to publishing a story about Loki transforming into a female horse, disappearing for a year, and coming back with an eight-legged horse calf. (Yes, this really happened. Look it up.)

When it came time to introduce Brunnhilde to the Marvel universe, the company rightfully decided to tone down some of her tragic backstory, which involved betrayal, murdered children, and unhappy marriages. What ended up in the comics is still pretty dramatic, with her consciousness being separated from her true body and her powers manipulated against her will. But, all things considered, it could’ve been much worse.

4) Like most Norse gods, she has died a lot

Deities and comic book characters both seem to have incredibly high mortality rates. Valkyrie falls into both categories, but fortunately, both groups tend to come back from the dead almost as often as they meet their demise.

Brunnhilde’s body and soul were separated by Amora the Enchantress, who later placed Valkyrie’s essence in the body of a woman named Samantha Parrington in a revenge plot against the Hulk. Valkyrie is later embodied by a woman named Barbara Norris, who became the longest-serving member of the Defenders superhero team. Valkyrie eventually regained her Asgardian body, Brunnhilde, but got turned into a statue of ash and died again. Then Doctor Strange revived her in body of another woman named Sian Bowen—and that’s not even the end of it. Even by comic book standards, Valkyrie’s adventures and origins are especially complicated.

5) Valkyrie has a duplicate

As if Valkyrie’s identity isn’t tough enough to follow, at one point in the comics she gets a duplicate. With Valkyrie back in Asgard as Brunnhilde, the god Pluto convinces Amora’s sister, Lorelei, to resurrect the spirit of Valkyrie in Samantha Parrington, essentially creating a second Valkyrie. Pluto and Lorelei use this mind-controlled duplicate to do their bidding until she attracts the attention of Brunnhilde and the Defenders. During the conflict, Samantha manages to shake the mind control and helps Brunnhilde, and the Defenders defeat Pluto and Lorelei. Brunnhilde returns to her duties in Asgard, while Samantha reestablishes her Valkyrie role with the Defenders on Earth. 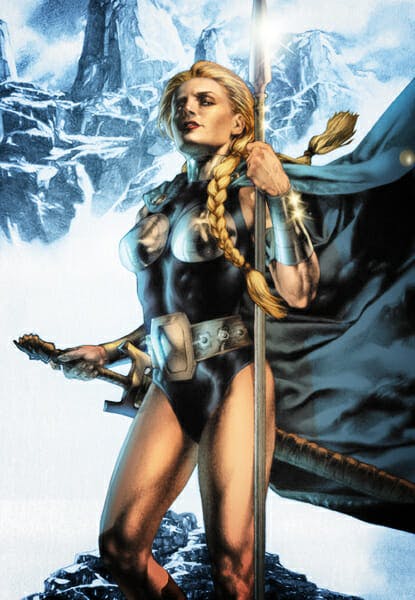 The question of Valkyrie’s sexuality became an unexpected focus in the weeks leading up to the release of Thor: Ragnarok. Actress Tessa Thompson teased on Twitter that Valkyrie is bisexual in the movie, which would have made her Marvel’s first LGBTQ main character. Thompson later clarified, however, that the issue isn’t explicitly addressed in the film but that she tried to be faithful to Valkyrie’s character in the comics.

YES! Val is Bi in the comics & I was faithful to that in her depiction. But her sexuality isn’t explicitly addressed in Thor: Ragnarok. https://t.co/hmb5lYN5to

Apparently, we were close to getting an actual scene confirming Valkyrie’s sexuality. Thompson told Rolling Stone that a suggestive scene was filmed that featured a woman creeping out of her bedroom, but it was ultimately left on the cutting room floor.

7) Valkyrie is friends with all of your favorite Marvel characters One thing Marvel does a good job of is making sure its supporting characters don’t get pigeonholed. If a villain was introduced in a Spider-Man series, it’s not all that surprising to see them show up in Daredevil. If a side character showed up in X-Men, they just might end up teaming up with the Fantastic Four down the line. Valkyrie is a prime example.

With her deep roots in Asgard, it wouldn’t be surprising if Valkyrie’s relevance only went as far as Thor’s comics. But, instead, she’s spent time as a member of the Defenders, Secret Avengers, and the Avengers. If you’ve read any comics that feature Valkyrie, you may have been a bit surprised when you saw her appear in the Thor: Ragnarok trailer. Valkyrie is traditionally depicted as a white woman with long blonde hair, but that description doesn’t exactly fit Tessa Thompson, who’s a black woman with long black hair.

Ragnarok director Taika Waititi told CBR, “Right from the start we wanted to diversify the cast, and it’s hard when you’re working with Vikings. [Laughs.] You want to be more inclusive and provide a broader representation. And at that point, you have to look at the source material as a very loose inspiration. And then take it from there and go with your gut. Say, ‘You know what? None of that stuff matters. Just because the character was blonde and white in the comic book. That doesn’t matter. That’s not what [that character] is about.'”

For those who were bothered by the casting choice, let’s just remember that we’re talking about a fictional character who can see people glow before they die, and who has a centuries-long history of taking over people’s bodies. Have some perspective, please?

9) Valkyrie is a (literally) gigantic badass Tessa Thompson’s cinematic version of Valkyrie looks awesome in Thor: Ragnarok, but we kind of wish the movie aesthetic matched comics in one regard: Valkyrie is huge. Not Hulk huge, but still way bigger than the average human woman. According to Marvel, Samantha Parrington is 5-feet-7-inches tall and 130 pounds as her human self, but as Valkyrie, she’s a towering 6-feet-3-inches and 475 pounds of pure muscle. It makes sense that Marvel Studios executives want Valkyrie to be conventionally petite and pretty—gotta sell those movie tickets—but I can guarantee if they rolled out Valkyrie as a hulking badass, many Marvel fans, especially women, would instantly cheer.