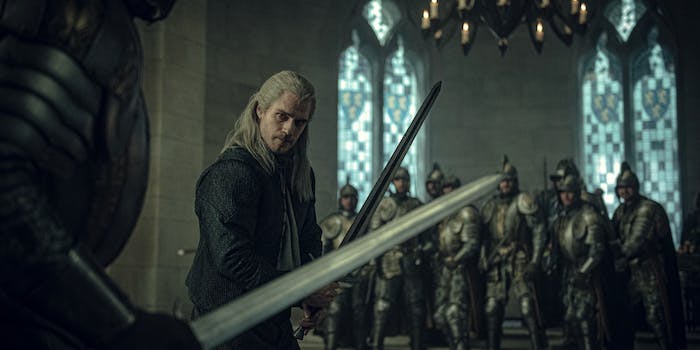 The Witcher is one of the first Netflix shows in quite some time to hold our collective attention for more than what feels like a single weekend and it’s easy to see why. Geralt, the freelance monster hunter portrayed by Henry Cavill, is giving off big Mandalorian Dad Energy. “Toss a Coin to Your Witcher” is an instant earworm. And Geralt is seemingly a man of few words—and the ones he does use are entirely relatable.

Fans who’ve already made their way through all of The Witcher’s eight episodes have noticed that Geralt really likes saying fuck.

It’s significant enough that even one of Netflix’s Twitter accounts quoted the wise words of Geralt.

But it’s a certain type of “fuck.” It’s not a word he throws around passionately or in a fit of rage; it’s not even all that sexy. (Unless you consider Cavill doing just about anything in The Witcher to be sexy, which, fair.)

It’s a word he throws around with a tired sigh, something he says as he’s facing at least half a dozen men ready to kill him. He utters it when he’s annoyed, when he’s about to face a monster, and when he’s dealing with an injury. He even says it when he doesn’t know what else to say.

Every time Geralt says “fuck,” an angel gets its wings

It's a perfect show

My favourite scenes in the Witcher are the ones where Geralt pauses and then quietly says "fuck."

But if he says anything more often than fuck, it’s “hmm,” a sort of acknowledgment he uses in the same vein as the word “fuck.” But mix in some more tender moments with his horse Roach, and “hmm” is all-encompassing. It’s not even a word, but viewers know exactly what he means by it. And it’s working on them too.

Wizard: Witcher, you must kill the murderous Demon!
Demon: I only murder to protect my children!
Geralt: Hmm.
Wizard: But his children transform into ZOMBIES
Demon: But those zombies are innocent POTATO FARMERS
Wizards: But those potatoes are POISONOUS
Geralt: HMmMmMm

Nobody:
Geralt of rivia: hmm https://t.co/yjKRFGlvX5

If you’re not caught up on The Witcher (or even if you are), you can watch every single “fuck” and “hmmm” in one glorious compilation.

If you want even more “fucks” and “hmms” from your Witcher, you’re in luck. Netflix already renewed the show for a second season.