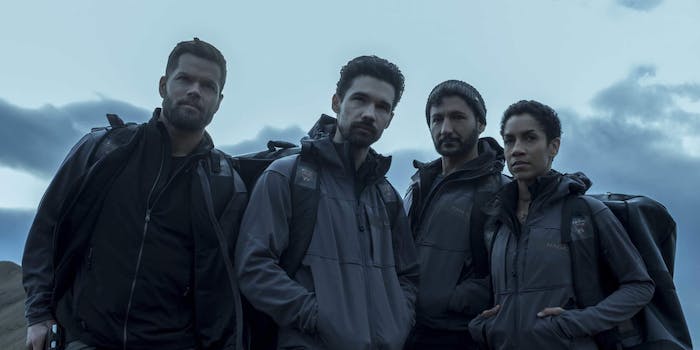 ‘The Expanse’ makes a triumphant return with season 4

Now exploring strange new worlds outside our solar system, 'The Expanse' continues to improve with every season.

The Expanse continues its upward trajectory with season 4, introducing a new conflict to its epic tale of interplanetary feuds. Season 3 ended on a bold cliffhanger, activating a Stargate-like portal that connects our solar system to a web of far-off worlds. The balance of power soon shifts between Earth, Mars, and the Asteroid Belt, with leaders debating the merits of colonizing alien territory. But groups of desperate Belters, sick of living in poverty, are already willing to risk their lives and settle on new worlds. The planet Ilus is one such colony, where the crew of the Rocinante arrive on a fact-finding mission to an independent Belter settlement.

RELEASE DATE: 12/13/2019
STREAMING: Amazon Prime
‘The Expanse’ returns for an epic fourth season, moving beyond our solar system into alien territory. With slick visual effects and a satisfyingly complicated plot, the show continues to deliver high-quality science fiction at its new home on Amazon.

As ever, The Expanse’s plot is too sprawling and complicated for a full recap. So too is the ever-changing cast list, which retains the previous main characters (the Rocinante crew, the OPA fleet, Earth politician Chrisjen Avasarala, and Martian ex-marine Bobbie Draper) while adding a crowd of new faces. Burn Gorman (Torchwood, Pacific Rim) is an obvious standout, playing Ilus colonial security boss Adolphus Murtry, a name that comes dangerously close to calling your new villain Murder Hitler. And he is indeed very murdery. By the time the Rocinante gang arrives on Ilus as impartial observers, Murtry’s crew of armed cops have already kicked off a Wild West dispute with the Belter settlers, a ragtag bunch of refugees who plan to get rich on the planet’s lithium deposits.

Working on the assumption that no one will jump into The Expanse at season 4, I can confirm to longtime viewers that you’re getting more of what you came for. The tensions between the various factions are as intricate as ever, delving more into the local politics of Earth and Mars. Shohreh Aghdashloo continues to be absolute perfection as the foul-mouthed Avasarala, now facing a daunting election campaign at the UN. As one of the lead actors recently confirmed on Twitter, the show is still much more interested in hard sci-fi than romance and relationships, although you’ll be happy to hear that the charmingly amoral Amos (Wes Chatham) has found someone new and characteristically inappropriate to latch onto. (Amos, like the show in general, gets better with every season.)

The main relationship story is really the Rocinante crew, who truly feel like a family now. When they first arrive on Ilus, we get a lovely sequence where the space-born Naomi (Dominique Tipper) struggles with her first steps in natural gravity, while her three crewmates stand proudly behind her. Previously flung together by circumstance, these four survivors are now stuck together for good. They understand each others’ flaws and foibles, the worst of which is James Holden’s terminal case of Protagonist Syndrome.

Introduced as an everyman hero, the eternally-frowning Holden (Steven Strait) was so dull in the first two seasons that I repeatedly forgot his name. Season 3 livened things up by pairing him with an alien hallucination (Thomas Jane! So fun!) but he now seems to be backsliding again. As always, he’s wrongly convinced that he can stay neutral in the middle of a deeply contentious conflict. The show is similarly convinced that he’s a brilliant leader who deserves to be at the center of the action. I only watched the first half of the season, so hopefully, the wild-eyed, hallucinating version of Holden will return in later episodes. While The Expanse’s defining appeal is (for want of a better word) its “realism,” the show is often at its best when things get weird. Remember when Joe Miller made out with an undead crystal? Remember when everyone got stuck in a time bubble? I assume we’ll get more of that in later episodes, but for now, we’re mostly restricted to mysterious rumblings around the alien structures on Ilus.

The Expanse occupies an interesting space in the current sci-fi fandom culture wars. Fans praise its focus on science, worldbuilding and plot-heavy storytelling, with minimal romance and little in the way of Star Trek-style allegorical commentary. In theory, this is precisely what conservative fans complain is missing from mainstream sci-fi, but much of the time that’s a dog whistle for complaints about progressive politics and inclusive casting. The Expanse acts as a handy litmus test because it is plot-heavy science fiction about terraforming and gravity sickness and alien architecture, but it also has one of the most racially diverse casts on TV, and it’s explicitly about colonialism.

Aside from individual villains like Murtry, there are no over-arching bad guys in The Expanse. Each of the factions represent a different angle on space colonization, beginning with the wealthy and stagnant Earth, where a manipulative elite (including our beloved Avasarala) rules over a largely disenfranchised public. Martians are proud of their self-made power, but as Bobbie (Frankie Adams) discovers when she gets home, things get shaky when Mars isn’t at war. As for the Belters, they’ve been exploited for their labor and resources for generations, and many see the Ring as a chance for a new life. But once they become colonists themselves, they run into new problems. Ilus may seem like a land of promise, but humans are an invading force in a pre-existing ecosystem—one that’s already been shaped by older, more technologically advanced settlers.

After being canceled by Syfy, The Expanse was picked up for two more seasons on Amazon, with season 4 arriving in its entirety on Dec. 13. I actually think the show benefits from weekly installments instead of marathon viewing, but c’est la vie. Coming from the same creative team as before, this season offers glossy production values and the robust storytelling we’ve come to expect. In an era of over-long, over-budgeted shows that fail to live up to expectations, it’s a relief to watch a longform adult drama that doesn’t attempt the trappings of prestige TV. The Expanse consistently delivers high-quality science fiction, and while I can’t promise to remember the names and backstories of all 12 million characters, that clearly hasn’t been a problem so far.