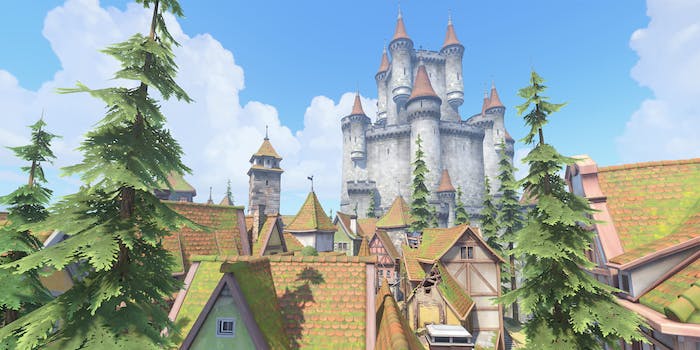 Ancient temples, neon lights, and more than one robot factory.

“Never accept the world as it appears to be. Dare to see it for what it could be.” The words of Dr. Harold Winston rang true for his primate protege, who spurred the remaining members of Overwatch into action after the world fell once again into turmoil. But a world worth fighting for needs beauty and life within it. That’s why we’ve ranked all maps from worst to best.

Oh, Horizon Lunar Colony. There’s certainly some interesting backstory to your facilities, what with the lab monkeys going positively ape and killing every human onboard. But hell if you’d find it here. While the space station looks like a place you could have some fun leaping around on hands and toes, it’s an example of a grayish, industrial interior that would fall by the wayside in any other game. That its biggest bit of character is a giant telescope you only see in the spawn room says all you need to know.

On its surface, Lijiang Tower tries earnestly to combine the ancient cultural touchstones of Chinese culture with a decidedly modern flare. Pagodas sit across from food stalls. Neon lights brighten up the city sky. Gardens give way to views of epic skyscrapers. It’s just too bad that the modern elements really do drag you down in a morass of gray steel and uninteresting interiors. Think hard: What’s the room in the image above even used for? You don’t know, and I don’t think the developers do, either.

Don’t get me wrong—Volskaya is home to some of Overwatch’s finest matches, what with the tight interiors and almost impossible capture zone on the second point. Like its fellow worst-of brethren, though, it can’t escape industrial, bland architecture that ultimately doesn’t have much character. On the upside, if you look out the windows and to the horizon, you’ll see giant mechs doing … mech things, and that’s always cool.

Upon looking at Nepal, one might be spurred to ask, “Why do all these robot monks hang out around giant open pits?” It’s a fair question, even for the snowy beauty of the rustic village and temple interiors. You’ve got to admit, it’s pretty dope that they’ve got several giant statues of themselves meditating outside the main gates. I just wish they had settled on a less drab color scheme.

The beauty of Oasis isn’t in its level layout but rather in its underlying identity. Set in the Arabian Desert in Iraq, Oasis gives players a different vision of the region than most westerners are likely familiar with. Rather than the conflict and violence of televised war, science, art, and progress lies at the heart of this level. Overwatch is a global game spanning numerous countries, but with Oasis, it feels like the developers knew they had to represent a misunderstood region in its most positive light.

Watchpoint: Gilbraltar is one of the game’s oldest bases of operations and Winston’s tire-swinging home. It’s also another one of those metallic, factory-like installations in the Overwatch maps lineup. But it’s definitely got charm and history. From the war room where Winston crashes, to the giant plane in the hangar, to finally the rocket that lifts off into space, Gibraltar gives us a solid idea of just how strong Overwatch was in its heyday.

Dorado is one of a few Overwatch maps set during the night, and it feels like a party. Festive decorations adorn the town square before giving way to the giant robotic pyramid. Plus, you can play the Futurama theme song on the bells in the attacking team’s spawn room, and that’s just rad.

The first map the Overwatch team crafted, and home to a lot of Torbjörn concept art, the Temple of Anubis is what set the tone for all Overwatch maps to come. It features holographic sphinx heads, cyberized pyramids, and one heck of a difficult final capture point.

Perhaps the greatest thing to come out of Greek iconography since Mamma Mia!, Ilios is a beautifully whitewashed vision of oceanside splendor (relatively) untouched by the technological advancements of Overwatch’s world.

A modern cowboy epic, and the result of McCree’s overzealous sharpshooting, Route 66 rolls through old-timey gas stations and Wild West saloons as confidently as any spaghetti Western, even if it does end up in another factory-like setting (seriously, what’s the deal with ending Overwatch maps in factories?).

Hollywood may not always be glitz and glamour, but it definitely is beautiful in this map, sporting modified motifs from the golden age of cinema including several hilarious movie posters. That you can reenact your favorite shootout in the streets of an Old West film set or between an alien squid’s tentacles is just outright awesome—and a pure distillation of Hollywood cheese.

Junkertown is big. Like really, really big. That makes sense, though, considering it was the former home of larger-than-life criminals Roadhog and Junkrat. Transporting a bomb stashed under a pile of gold is just devious, and the rickety architecture gives way to incredibly interesting flanking routes. It’s no wonder that criminals live here. I feel murderous just looking down on my enemies from atop some of these walkways.

The latest addition to the roster of Overwatch maps, Rialto is the sight of a deadly Blackwatch (Overwatch’s subterfuge division) incident that sparked the beginning of the end for the organization. Refitted into a payload map, Rialto’s glowing canals and gondolas give way to hypnotic art exhibits full of extraterrestrial-looking displays. Like Italy itself, it’s a blast to take in.

The Black Panther of Overwatch maps, Numbani marries African architecture with technological futurism. Plus, it’s one of the few places that strife between Omnics and humans is almost nonexistent. Towering skyscrapers are imbued with the shapes of African nature and animals, letting solid steel structures feel more alive than they ever could on their own. In a stroke of brilliant subtlety, Numbani’s airport emphasizes the city’s connection to the rest of the world, rather than Wakanda-like isolation.

King’s Row perfectly embodies the darker aspects of the game. It’s the second map ever created for Overwatch and the site of the intense “Alive” animated short featuring Widowmaker and Tracer. London architecture melds with steampunk and robotic elements, giving life to every corner of these desolate streets. Be it the Mondatta memorial in the city square, or the posters hanging along walls that illustrate the plight of peaceful Omnics, King’s Row is arguably one of the best payload maps in all of Overwatch.

It’s big, it’s flashy, and by god is it absolutely dumb—but all in the most celebratory way possible. Blizzard World is BlizzCon come to life. There are statues of major Warcraft characters, a StarCraft arcade, and a Diablo ride scarier than anything out of the Haunted Mansion. It’s an Easter egg hunter’s dream, and it’s inarguably one of the most colorful (if gaudy) maps available. Are you really going to knock “Snaxxaramas?”

Blending the youthful modernity of Japan with its solemn past, Hanamura is an idyllic blend between old and new. The attention to detail is staggering. Cherry blossom trees emit pink light, arcade games scream for attention, and the subtle lighting of the temple, making Hanamura Overwatch’s best point capture map by far. It even includes minor details from the “Dragons” animated short, including Hanzo’s arrow stuck in the temple floor. Now that’s classy.

Eichenwalde isn’t just a map. It’s an entire history of one city’s fight for survival against the Omnic horde and the heroism inside the bravest of us. Years before the events of Overwatch, a young Reinhardt guarded the city alongside the leader of the Crusaders, Balderich von Adler. When Reinhardt’s youthful pride resulted in lost lives, it was Balderich who reminded him of the duty that would define his own life. Balderich paid the price by sacrificing himself in a final stand.

In the present day, Eichenwalde is overrun by nature, turning the mutilation of war into a beautiful tapestry of green and silence. That we effectively walk the same steps as the Crusaders, leading all the way to Balderich’s body still laying triumphantly on the throne, is a testament to the storytelling a map can give. Eichenwalde isn’t just a place to play; it’s a world unto itself.