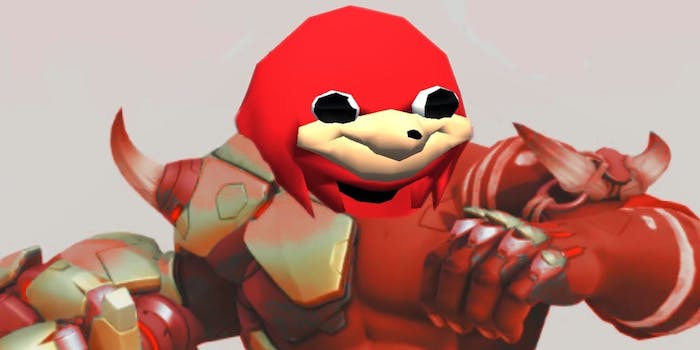 The Ugandan Knuckles meme is spreading to competitive gaming

Overwatch League will have to figure out how to handle this racist meme.

You can’t go anywhere on the gaming internet in 2018 without seeing Ugandan Knuckles, a warped, racist version of a Sonic the Hedgehog character. The meme has ruined the virtual reality social game VRChat, it’s been in videos by hugely popular YouTuber PewDiePie, and now it’s popping up at competitive gaming events. That’s causing problems for esports leagues, which are torn between cracking down on a popular trend and allowing a problematic meme to sneak into their broadcasts.

In case you’ve been lucky enough to avoid it, here’s a brief recap of the Ugandan Knuckles phenomenon. The character started as a funny drawing on a gaming YouTube channel, then some fans gave it a “Ugandan” accent based on the Ugandan-made low-budget action comedy Who Killed Captain Alex? Soon, swarms of trolls were running around online, using Knuckles avatars and saying “Do you know de wey?”—a line from the movie—in a fake African accent.

Predictably, the joke went beyond just quoting the film. It became an excuse for white gamers to say “n***a” and to mock African languages by doing a bunch of exaggerated tongue-clicking. When people pointed out that Knuckles had become problematic, his defenders turned him into an alt-right “free speech” icon along the lines of Pepe the Frog. It’s a fraught situation for corporations to navigate without alienating part of their fanbases.

Overwatch League, the brand new competitive arm of Blizzard’s popular shooter Overwatch, has already been beset with Ugandan Knuckles content—not just from viewers, but from the players themselves. Kotaku’s Maddy Myers and Nathan Grayson reported this week about how the meme has plagued OWL’s first two weeks:

Ugandan Knuckles’ repeated appearances in and around Overwatch League have prompted confusion from viewers who rightly point out that the meme has become a racist caricature.

As of week two of OWL, Ugandan Knuckles signs were still making occasional appearances in the crowd on match broadcasts.

Advertisement Hide
Meanwhile, three different Overwatch teams used Ugandan Knuckles in tweets, and one team even started doing the “Do you know de wey?” bit during a live broadcast. They perhaps didn’t realize the meme had blown past funny movie quotes and taken on racist connotations. All three tweets have now been deleted, and the Dallas Fuel team told Kotaku they’ll “no longer engage” with the meme.
The responses to Kotaku’s coverage are pretty much what you’d expect—defenses of Ugandan Knuckles as not-racist and accusations that anyone who doesn’t like him is a sensitive snowflake:

I find calling everything racist and thinking that minorities are super sensitive to "racist" jokes is one of the most racist thing you can do.

You asshats wouldn’t know a JOKE if it bit you, in the ass!

Please do everyone a favor, and FIRE your SJW staff. They are too sensitive to handle reporting on either the Internet, or the gaming scene.

Maybe Ugandan Knuckles represented a joke at some point, but it’s clear that what he’s come to represent now is white people defending their right to be racist without being called racist. These griefers are probably just an outspoken minority of Overwatch fans, but Blizzard and the Overwatch League would certainly be courting backlash if they tried to ban the meme. Having to thread that needle is certainly an unenviable position for a corporate PR team to find itself in. Hopefully, they can find de wey to handle the situation without making the meme even bigger.