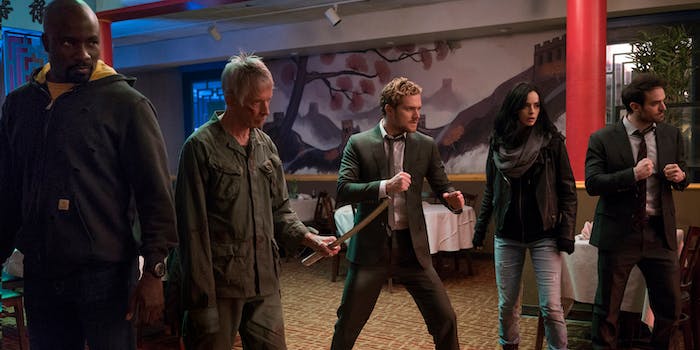 'The Defenders' brings plenty of good material from the heroes' solo shows, but fails to add any new ideas.

As a Netflix show, it almost goes without saying that Marvel‘s Defenders is slow to start. The first episode is light on action, reintroducing us to the four leads: Daredevil (Charlie Cox), Luke Cage (Mike Colter), Jessica Jones (Krysten Ritter), and Iron Fist (Finn Jones). Fortunately, things heat up once the team gets together.

The four heroes are reluctant allies who barely tolerate each other, a dynamic that works better with the Defenders than the Avengers, which replaced the camaraderie of the comics with unnecessary conflict. This tension makes more sense for a loner like Matt Murdock, whose double life inspires acerbic mockery from Jessica Jones. There’s also some unavoidable conflict between Luke Cage, a black man who was the subject of experiments in prison, and Danny Rand, a living symbol of white privilege. After Iron Fist‘s ploddingly serious attitude to Danny’s ridiculous backstory (Dragons! Kung fu monks!), it’s comforting to see other characters react with disdain.

The Defenders borrows heavily from the four solo series, with mixed results. Introduced in the style of their own shows, Jessica gets a noir detective subplot, Daredevil juggles legal drama with self-imposed moral torment, Luke Cage returns to sepia-toned Harlem, and Iron Fist… is boring. Therein lies the first major problem. Showrunners Doug Petrie and Marco Ramirez had plenty of great material for the first three characters, but Iron Fist cemented Danny Rand’s role as a dull, whiny man-child.

On top of Iron Fist’s uninspiring personality, it’s hard to justify his presence on the team. What does he bring to the table? Kung fu skills, a super-strong fist, and knowledge of the villains known as the Hand. But he’s rendered superfluous by Luke and Jessica’s super-strength, and Daredevil’s own experience with the Hand. If only they could replace Danny with more screentime for superhero helper Claire Temple (Rosario Dawson), who adds a more vibrant personality to the mix. On the bright side, Rand’s fight scenes are noticeably better than in Iron Fist, which used blatant camera trickery to disguise the actor’s lack of training.

Marvel’s Netflix franchise has an excellent track record with supervillains, and The Defenders delivers yet again with Sigourney Weaver as Alexandra. She follows the same blueprint as the last few villains—an enigmatic businesswoman and crime boss—but Weaver is so stylish and coldly threatening, it honestly doesn’t matter. The only downside is her connection to the Hand, whose plans are still shrouded in thinly written mystery.

The Hand were the lead villains of Iron Fist and Daredevil season 2, which barely explored the organization’s nebulous motives. Delivering squads of predominantly Asian footsoldiers to fight Daredevil and Iron Fist, the Hand are a cross between the mafia and a ninja-themed cult. Their best character was the drug kingpin Madame Gao, but in The Defenders, she’s a subservient lackey to Alexandra.

At this point, the Hand’s racist subtext is thoroughly baked into the franchise, alongside Iron Fist’s problematic legacy as a white Bruce Lee ripoff. So with that caveat, let’s talk about Sigourney Weaver absolutely crushing it as Alexandra.

Luke Cage introduced Mariah Dillard as a wonderfully complex villain last year, but it’s still refreshing to see an older woman as the antagonist. Clad in a socialite’s wardrobe of architectural white coats and metallic couture, Alexandra stands out in the gloom of Marvel’s New York. Her personality combines several familiar supervillain characteristics—illuminati influence; menacing parental subtext; a passion for classical music—but these tropes are classics for a reason. Weaver makes it work with silky, self-contained charm.

While some of the Defenders’ solo subplots are a little slow, every Alexandra scene is a highlight. Best of all are her scenes with Daredevil‘s Elektra (Elodie Yung), resurrected as a mindless assassin.

In the four episodes made available to critics, Alexandra and Elektra sow the seeds of a fascinating relationship. Elektra is a near-wordless amnesiac, groomed by Alexandra as a true believer in the mysticism behind the Hand’s generic “take over the world” goals. One particular scene feels almost like a birth; gory and confused, with Alexandra as the mother and midwife to Elektra’s second life.

Waif-like killers are something of a superhero cliché, but Elektra benefits from having such an intriguing, disturbing woman as her mentor. Alexandra is tender yet manipulative, nurturing but unafraid to physically grapple with her lethal new protege. Compared to the by-the-book storylines of the four Defenders, this is the one subplot that feels genuinely fresh.

Despite the luminous presence of Sigourney Weaver, The Defenders doesn’t measure up to the high points of the solo shows. The writers carefully balance the plot between characterful roles for each Defender, but the story feels shallow without the political themes of Jessica Jones or Luke Cage, or the emotional impact of Daredevil. Waiting for a true resolution in the solo spinoffs, I worry that The Defenders will leave its lead characters to tread water in their personal lives.

Marvel sometimes struggles to balance its extended universe, but this wasn’t a problem for the solo Defenders shows. You can see why Luke or Jessica must deal with their enemies alone, instead of calling the Avengers hotline. This independence makes less sense in The Defenders, where the Hand are portrayed as cataclysmically dangerous. The threat is too big and too mysterious, lacking the intimacy of a villain like Wilson Fisk. And we’re meant to believe the good guys can defeat the Hand with hand-to-hand combat and a little detective work.

As a screen version of a crossover event comic, The Defenders is just OK. It’s perfectly watchable, with appealing performances from Mike Colter, Charlie Cox, and Krysten Ritter, but it doesn’t feel like the momentous culmination of a franchise. It’s more like something you’ll lazily watch to make sure you’re up-to-date on canon, waiting for your favorite character’s next solo series to arrive.