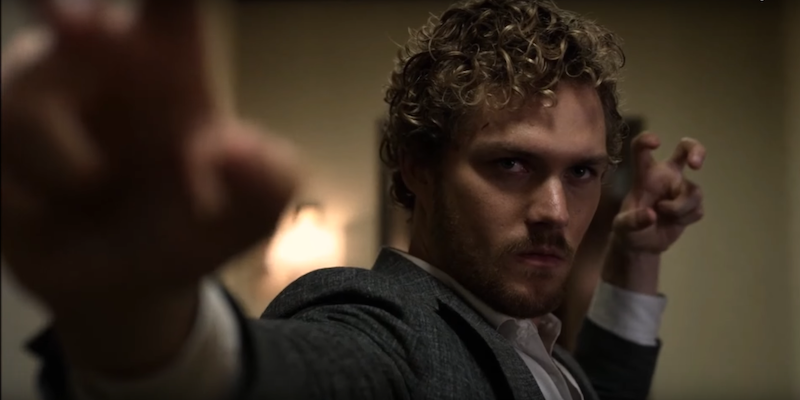 These clips illustrate why 'Iron Fist's fight scenes were so much worse than 'Daredevil's.

Netflix unleashed Iron Fist last Friday, and while the show does have a few fans, the response was largely negative. Along with bad writing and debatable casting choices, many people criticized the action scenes as a notable problem.

Here is a clip from Iron Fist where there are 56 cuts in a 35 second fight scene: https://t.co/MHtzV8ge2V

This kind of rapid editing builds a false sense of urgency, and is often used to disguise clumsy choreography. It became infamous due to scenes like this moment in Taken, using 12 split-second shots to show Liam Neeson jumping over a fence. Since this Iron Fist scene involves a more complicated scenario, it’s arguably an even worse example. The fast editing creates a confusing environment with muddled viewpoints and no sense of direction, making it harder to follow the fight.

Iron Fist was inspired by 1970s kung fu movies, but no one seriously expected Finn Jones to become the next Bruce Lee. The show focuses on plot over action, so it makes more sense to compare it to Daredevil. And that comparison makes Iron Fist look like total garbage.

Daredevil‘s hallway fight was praised for its stylish choreography and camera work. There’s a real weight and brutality to Daredevil’s blows, and the scene uses a long tracking shot so you can clearly see all the necessary action. It became an iconic moment for the show, to the extent that season 2 included a deliberate callback with this stairwell fight scene.

In Iron Fist‘s corridor fight, the camera constantly cuts away before the blows connect. The editor chopped Danny’s choreography into two or three shots per move, so you don’t catch the full impact of his actions. It’s like trying to follow a ballet performance through a dozen tiny windows around the stage.

Once the fight reaches the elevator, we get a completely unnecessary split-screen view of Danny disarming one of the hatchet men. If you watch from 1:35 in the above video, the split screen actually makes it harder to see what he’s doing.

Iron Fist would be better if its lead actor were an experienced fighter. However, casting isn’t its only problem. Neither Finn Jones nor Daredevil‘s Charlie Cox had a background in martial arts, but while Daredevil turned Cox into a convincing badass, Iron Fist emphasizes Jones’s lack of skill.

Cox’s stunt double, Chris Brewster, previously doubled for Chris Evans as Captain America, and worked with Cox and the stunt coordinators to design Daredevil’s fighting style. Jones didn’t receive the same kind of backup, partly due to the show’s costuming choices. Without Iron Fist’s mask from the comics, it was much harder to swap Jones for a stunt double during the fight scenes. Combine this with Jones’s weak performance and some seriously bad editing, and you have a recipe for disappointing fight scenes.