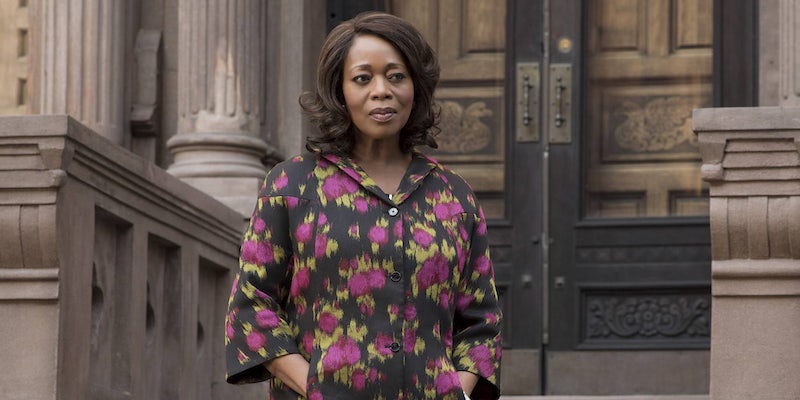 Luke Cage is a B-lister in the world of Marvel comics, which turned out to be an unexpected boon for his Netflix series. Instead of being tied to a familiar structure like Daredevil, Luke Cage‘s writers had the freedom to reinvent virtually everything except Luke’s powers and origin story.

The narrative and political themes of Luke Cage are solidly grounded in the character’s comic book legacy, but the show otherwise plays fast and loose with canon—especially when it comes to the villains.

Nightclub owner and crime boss Cornell “Cottonmouth” Stokes (Mahershala Ali) was marketed as the main antagonist, roughly analogous to Daredevil‘s terrifying yet sympathetic Wilson Fisk. But as the season progresses, it becomes clear that Cottonmouth isn’t quite as all-powerful as he seems. By the end of the seven episodes made available to reviewers, it’s no longer clear who the “real” antagonist is—or if Luke Cage is even bothering with the classic superhero/villain formula at all. Cottonmouth is beholden to an unseen figure called Diamondback (another familiar name from the comics), but it’s equally possible that Councilwoman Mariah Dillard will step up to the plate as the show’s lead villain. Like Cottonmouth, Mariah Dillard is an updated version of an obscure Luke Cage villain from the 1970s. Introduced in the first Luke Cage series, Hero for Hire, “Black Mariah” was a gang leader and drug dealer. She’s revamped as a stylish thief who becomes embroiled in supernatural hijinks in the current Power Man and Iron Fist comic. The Netflix version is unrecognizable, a cold and calculating politician with close ties to Harlem’s criminal side: she and her cousin Cottonmouth, whose money she launders through her real estate projects, were both raised by notorious Harlem crime boss Mama Mabel Stokes.

Alfre Woodard gives a brilliantly two-faced performance as Dillard, a self-made woman with specific ambitions for herself and Harlem. The first episode introduces the chasm between her public image and her private persona, hugging schoolkids during a public event before dousing herself in hand sanitizer once the cameras are gone. Yet her vision for Harlem does seem to be based on a genuine investment in the community, partly inspired by Mama Mabel’s involvement in local politics—even as Cottonmouth points out that back in the day, Mabel’s main goal was getting blackmail material on powerful men.

In public, Mariah gives PR-savvy speeches about black excellence and Harlem’s cultural heritage—and while you might expect this to be a front for a self-centered desire for power, she privately backs up her beliefs during ideological debates with Cottonmouth. Her complexity is just one of many ways Luke Cage shows its deep respect for the source material, reinventing a one-note villain as a conflicted and self-aware character who could stand alongside Claire Underwood in House of Cards. Mariah is keen to distance herself from Cottonmouth’s reputation, but there are hints that she might be a more suitable heir to Mama Mabel’s criminal legacy than he is. Despite being linked by blood and money, their relationship is hardly symbiotic because Mariah has more to lose. So while Cottonmouth becomes myopically focused on macho power-plays and taking down Luke Cage, Mariah’s more strategic brand of ruthlessness comes into the foreground. It’s an almost Shakespearean tangle of hubris, ambition, and revenge.

Unless you count Rebecca Hall or Karen Gillan’s secondary roles in Iron Man 3 and Guardians of the Galaxy, we’re yet to see a Marvel Studios movie with a female supervillain. The TV shows are doing a little better, with Agent Carter introducing Madame Masque in its second season, but we’ve had to wait a long time for a character like Mariah Dillard to arrive. She’s a nuanced antagonist in a thought-provoking show, and while Luke Cage doesn’t have a flawless record for female roles (the flashbacks to Luke’s dead wife require some serious suspension of disbelief), Alfre Woodard certainly deserves equal billing alongside the excellent Mahershala Ali.