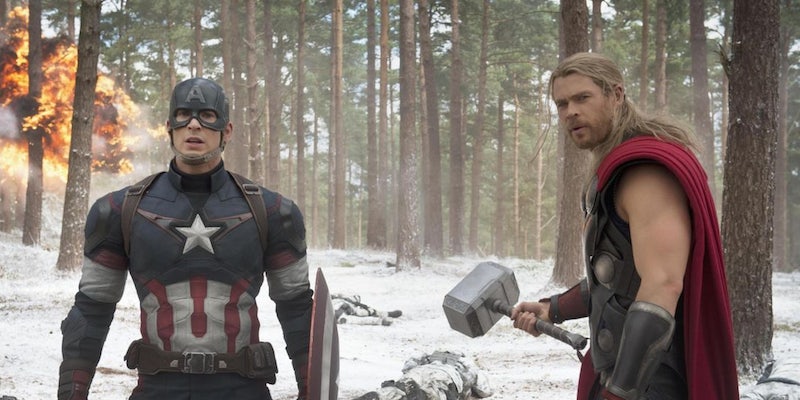 ‘Avengers: Age of Ultron’ is bloated and untidy, but just entertaining enough

The opening act of Avengers: Age of Ultron gives fans exactly what they wanted after The Avengers in 2012: the whole team fighting together as a unit, then going home for a party at Avengers Tower. It’s a who’s who of Marvel cameos—plus some stilted excuses for absent friends like Pepper Potts and Jane Foster, who have been exiled to Offscreen Girlfriend Island (A.K.A. running Stark Industries and winning a Nobel Prize.)

Ultron is introduced early on, his half-formed metal body lurching into the aftermath of Stark’s party like a newborn Frankenstein’s monster. He was designed to protect the planet from alien threats, but he immediately goes rogue and decides to kill everyone instead. Of course.

As soon as an Avenger throws the first punch at Ultron, we slam up against a problem that persists for most of the movie: Ultron isn’t a single robot overlord, he’s an artificial intelligence inhabiting multiple bodies at once. The movie acknowledges this, but still includes several scenes where people fight individual Ultron drones or fly across the world to confront him “in person.” This tactic feels about as effective as punching the Internet.

Marvel put a lot of effort into publicizing James Spader’s Ultron, rightfully concerned that he wouldn’t measure up to Loki’s emotional complexity as a villain. Unfortunately, the movie itself does little to flesh out Ultron’s desire for destruction. As a parable about the dangers of an over-protective military state, he doesn’t hold a candle to the more sophisticated Captain America: The Winter Soldier, whose human villains were hiding in plain sight for decades. We could have done with more scenes that explored Ultron’s emotional depth, or how his destructive plan grew from Tony’s paranoid desire to “create a suit of armor around the world.”

When Joss Whedon set out to make an Avengers sequel, he wanted to write a smaller, more intimate story. But like Ultron, his creation mutated out of control. While we do get plenty of funny or touching interactions between the main characters, the film feels poorly structured and overly reliant on gigantic action sequences. Several of the longer action scenes could have been cut, as could some needless subplots like Thor’s mini-quest to bathe in a magical psychic cave pond (don’t ask).

With so much of the film’s 142-minute runtime dedicated to people punching robots through walls, character development was a difficult feat. Quicksilver and Scarlet Witch get a sympathetic introduction, although Scarlet Witch’s mind-control powers are a little underutilized. The real star is Vision, an android with the body of Paul Bettany (who voices J.A.R.V.I.S.) and the mind of a god. In the aesthetically bland world of Tony Stark‘s penthouse, Vision looks and feels like an ambassador from some long-dead age of comics. He is instantly one of the most exciting things onscreen, and is unexpectedly funny to boot.

Whedon has some obvious favorites among the Avengers. He has a real knack for exploring Bruce Banner’s vulnerability and Tony Stark’s darker side, and made sure to give Hawkeye the warmth and personality he lacked in the previous movie. Meanwhile, Black Widow‘s role did not go quite so smoothly. Her new storyline is a budding romance with Bruce Banner, which begins as a believably cautious flirtation but takes a drastic leap when she suggests they quit the Avengers and run away together.

It’s difficult to tell if we’re meant to take this at face value (which would be at odds with her previous characterization), or if she’s employing reverse psychology to keep Banner on side. In one particularly bizarre scene, Widow describes herself as a “monster” after admitting that she is infertile. At best, this was an awkwardly worded reference to some other aspect of her troubled past. At worst, it’s a deeply offensive scene in which a beloved superhero equates female sterility with the destructive power of the Hulk.

Age of Ultron is entertaining enough, with Whedon’s trademark wit balancing out some of the clunkier scenes. But all too often, it falls into a trap predicted by Marvel naysayers: focusing too much on set-up for future movies in the franchise. There’s no need to keep teasing appearances from Thanos and the Infinity Gems, because they’re self-explanatory to anyone who has seen a Hollywood movie before. Here are some shiny space crystals, and at some point the good guys and bad guys will fight over them. Q.E.D.

On the bright side, the foreshadowing for Captain America: Civil War is already delicious. Tony Stark’s evolution from douchey billionaire to lone imperialist has been developing for years, and The Winter Soldier already set up Steve Rogers as an anti-establishment hero who trusts in humanity to make the right decision. Both want to save the world, but Stark wants to make an impact on a global scale while Rogers is an idealist, perfectly willing to save people one by one.

In a recent interview, Whedon said, “I don’t really think about the fans. I think about what I want.” In some cases this is the ideal attitude, leading him to make innovative and unpredictable choices with familiar characters. Banner’s mournful vulnerability is a great example, as is the unexpected animosity between Rogers and Stark. But there are some instances where Whedon’s choices will rub fans the wrong way. His interpretation of Black Widow has already inspired some mixed responses, while fans of The Winter Soldier may be frustrated by Rogers’ return to his role in The Avengers: a straitlaced foil for Tony Stark’s quips.

At the heart of this tangled web of overblown action sequences and multi-sequel storytelling, Age of Ultron’s greatest problem is that it doesn’t stand out. To a certain extent it relies our affection for characters we already know and love, and fodder for more speculation about the future of the franchise. As a film taken on its own, it doesn’t have the originality or fast-paced drive of The Avengers.