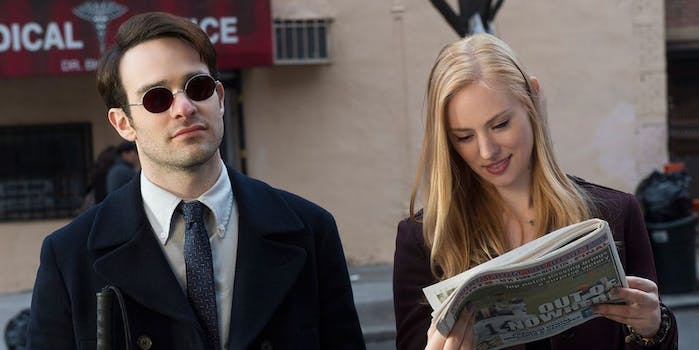 Marvel’s ‘Daredevil’ makes an exciting if unoriginal debut on Netflix

Daredevil is a familiar tale, even if you’ve never picked up a comic in your life: Daddy issues, a masked hero, and an urban noir landscape populated by mobster goons.

Matt Murdock (lawyer by day, vigilante by night) is partly defined by his blindness, which led to his semi-superpower of enhanced senses. Daredevil is otherwise very similar to Batman, although it takes place against the backdrop of post-Avengers New York. Unethical property developers are exploiting the wreckage left by Loki’s attack, a rare example of a superhero franchise examining the human impact of a cinematic showdown.

The main contrast between Batman and Daredevil is Murdock himself, a likable fellow who clearly aims to do good in his everyday life. He and his law partner, Foggy Nelson, have a refreshingly fun, easy rapport; a pair of friends who abandoned high-paying jobs to help their ailing neighborhood. You get the impression they’d be a lot more effective with Bruce Wayne’s billions than Batman ever was.

As a gritty superhero crime drama entering an already crowded field, Daredevil stands out in a couple of ways. It follows the old formula of an underdog hero punching his way through thugs and mobsters, but the fight choreography is unusually good and the dialogue is witty, natural, and fun. And as predicted, the Netflix format lets the plot flow more freely, avoiding the weekly recaps and formulaic structure of episodic TV.

Netflix also means Daredevil can be more adult-rated than other Marvel properties (seriously, do not expose your children to these gruesome skull-crushing sound effects), but it avoids encroaching on DC/Warner Bros. territory by having Murdock and friends be so gosh-darn cute. Murdock, Foggy, and Karen Page seem youthful and optimistic, which prevents things from getting too cynical or dark.

Even Daredevil’s nemesis Wilson Fisk (the Kingpin) is oddly adorable, an emotionally insecure yet ferociously powerful crime boss whose love life is one of the show’s more compelling subplots. Surrounded by a cast of stereotypical gang leaders, Vincent D’Onofrio’s Kingpin is magnetic and frightening; the most interesting Marvel supervillain since Loki.

Various geek sites are already hailing Daredevil as one of the best things Marvel Studios has ever produced, which is over-egging it a bit. Agent Carter is more original, and you can’t really compare a Netflix series to something like The Avengers. Really, its appeal boils down to whether you want to watch yet another urban vigilante story.

If this is your kind of thing, then Daredevil is an exciting and well-executed example of the genre, elevated by smart writing, a charming cast, and affectingly visceral fight scenes. If not, then you’re better off waiting for Marvel’s next Netflix series, A.K.A. Jessica Jones.

When telling a story that has been explored so many times before, you have to embrace some cliches and subvert the rest. Daredevil excels in many regards, but subversion is not its strong suit. With the exception of Murdock’s characterization as an altruistic charmer rather than rage-fueled angst machine, Daredevil runs the risk of feeling a little dated. Murdock’s childhood flashbacks to his father’s boxing career feel more like the 1950s than the mid-90s, and the show is relentlessly male-dominated. 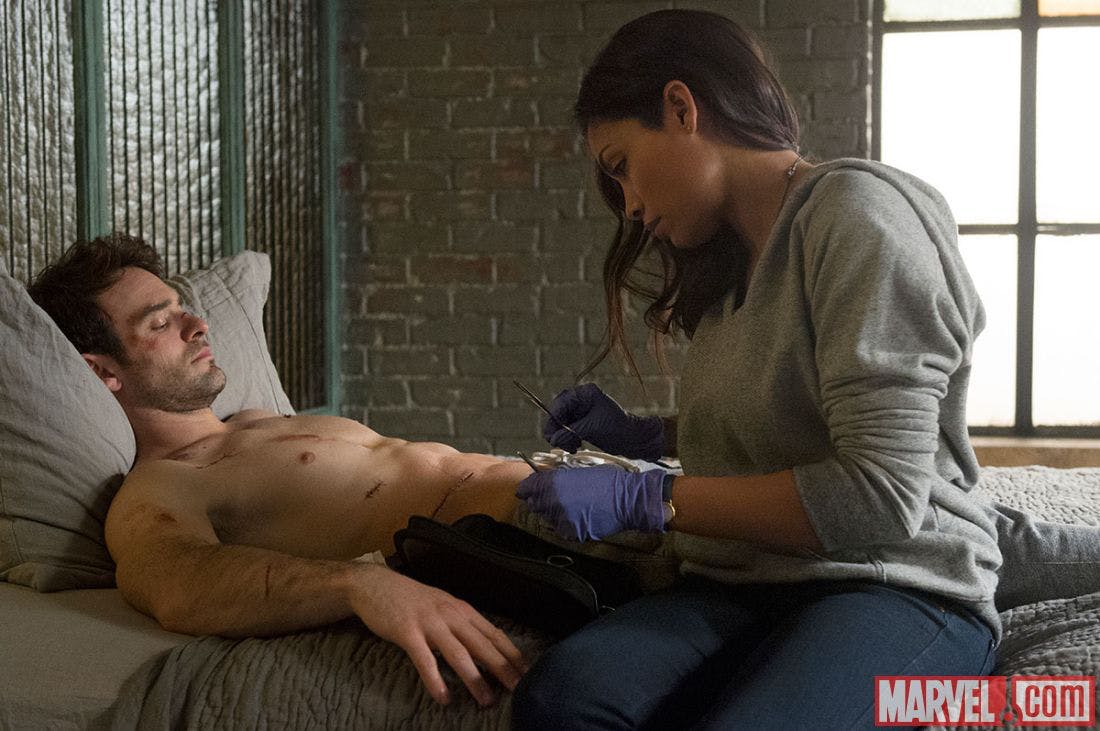 After Agent Carter, Daredevil‘s women feel like a step back. Rosario Dawson plays a beautiful nurse and Deborah Ann Woll plays a beautiful secretary, and both are kidnapped or brutalized within the first few episodes. Both characters are relatively complex, but that doesn’t excuse the fact that they’re massively outnumbered by men in a wide variety of roles. The only female supporting characters are the Kingpin’s love interest and crime boss Madam Gao, who speaks exclusively in untranslated Chinese. (The Russian gangster dudes, by the way, get their own subtitles, motivation and backstory.)

With this in mind, it’s irresponsible to give Daredevil a wholly positive review. Showrunner Steven S. DeKnight is best known for his work on Spartacus and Buffy the Vampire Slayer, so it’s disappointing to see him heading up a show with such a regressive attitude to women and minorities. Smart writing and high-quality fight scenes only count for so much when you’re excluding half your audience.