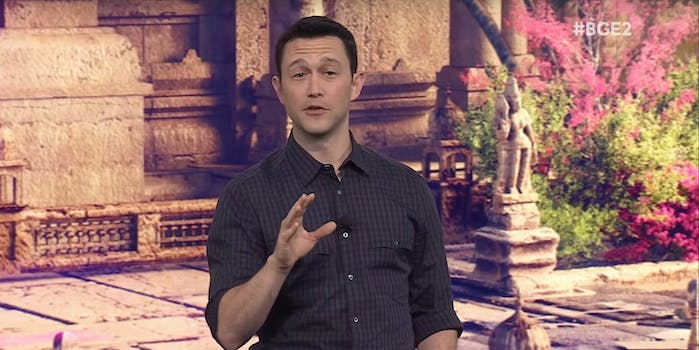 The Electronic Entertainment Expo is certainly no stranger to celebrity, and while sometimes said celebrities are there to promote their brand, it’s most often relegated to sports franchises. A rare exception occurred when actor Joseph Gordon-Levitt walked onstage at Ubisoft’s E3 2018 press conference to announce that his media collaboration company HitRECord had partnered with Ubisoft to produce music and artwork for the upcoming Beyond Good & Evil 2.

HitRECord is a company that utilizes a community of roughly 80,000 contributors who submit material for consideration, be it music, art, voiceover acting clips, or just about anything.

At first, it seemed like Gordon-Levitt was asking for BG&E2 fans and artists to create content for free, but shortly after the press conference, Gordon-Levitt took to Twitter to clarify that HitRECord does pay contributors whose work is used in the final product, same as previous HitRECord productions.

To be clear, it’s commendable that HitRECord and Gordon-Levitt have been so upfront about how their company works. The official HitRECord website has several videos featuring explanations of their payment structures. Despite this, many artists and designers have criticized HitRECord of utilizing “spec work,” the practice of enticing a community of contributors and only paying those they use, leaving potentially many more creators with nothing for their effort.

How does HitRECord’s payment system work?

As previously stated, HitRECord is, for a modern media company, fairly upfront about how their payment structure works. According to HitRECord’s website, if a project that HitRECord community members contributed to is monetized, the HitRECord staff reviews the final production and determines proper crediting, then they propose a profit for each individual contributor.

Those proposals are published publicly, and contributors are given two to four weeks to post feedback. Members can make an argument that they should be paid more than the current proposal, or that a different member should be paid less. Of course, HitRECord management has final say in all matters.

A review of various proposal forms shows that for an episode of “HitRECord on TV,” the company’s television show, nets contributors anywhere from $0.34 to $1,100. The vast majority of payments land somewhere between $10 to $30. In a 2018 video, HitRECord stated that they’ve paid out over $2.6 million dollars to contributors since its website’s founding in 2010. If that $2.6 million is divided evenly among 80,000-plus contributors, the average payment would be $33.

It’s important to note that the collaboration on Beyond Good & Evil 2 will function differently than past HitRECord projects. In a post, HitRECord management explained that instead of splitting all profit 50/50 between project contributors and HitRECord LLC, a lump sum of $50,000 has been set aside to budget all music and artwork contributions. HitRECord also stated that if the scope of their collaboration expands, they will earmark additional funds.

So what’s the issue?

The issue is deceptively simple. While HitRECord avoids the “for exposure” joke that’s become associated with cheapskates devaluing the hard work of artists, it still exploits them in a way that’s almost just as negative. “Spec work” pits a community of creators against one another, forcing them to turn in finished products without any assurance that even their rough or final drafts will be compensated. It moves all the commercial risk a company might take hiring artists or designers to work in-house or on a contractual basis, and then puts it all on that community who already largely live paycheck-to-paycheck. There’s little to no investment on the part of a company like HitRECord, but they still collect their own paychecks at the end of the day.

Put another way, if Joseph Gordon-Levitt acts in a film and all his material is left on the cutting room floor, he still gets paid. Not so with HitRECord.

It’s disappointing because if there’s anyone who should understand the value of artistic work, it’s an actor like Gordon-Levitt. The devaluing of artistic work has only increased in the digital age, where artists and art consumers have so much more access to each other. Negative myths, like “creative work is just for fun,” or “you should be happy to be paid at all for doing something you love,” only create a more vicious cycle of devaluing and desperation. On the surface, it’s great that contributors see exactly how HitRECord is breaking down payments, but the public commentary process also opens the door to harassment in the community.

You can’t pay rent with fun, and you can’t spend all your time working without compensation.

Ubisoft itself is a powerhouse of financial strength, making over €318.5 million from add-on content alone in the last year. That one of the most expansive and wealthy game companies in the world sees fit to crowdsource art assets used in their game raises clear questions of their financial intentions as a company.

HitRECord contributors do keep the ownership and monetization rights to their work, according to the company’s terms of service agreement.

So what does the internet have to say about it?

The outcry hasn’t been as widespread as many other internet controversies, but among designers and creative types on Twitter, the threat to their line of work is real.

“My paychecks varied wildly,” game and film composer Megan Carnes told the Daily Dot. “Sometimes I would get $1000, sometimes I would get around 50 cents. In all cases, I got paid less than what I would have been paid by a freelance client for a similar amount of work.”

Carnes, who was active in the HitRECord community from 2010 to 2015, says the pay rates and structure didn’t bother her when she was contributing to smaller projects. Once HitRECord began facilitating larger projects from wealthier corporations, she considered it exploitative and left. Carnes was able to find more work later as a result of the connections she made through the HitRECord community but still considers spec work to be an unethical practice.

“I think spec work is actively harming creative industries,” Carnes said. “Artists’ time is just as valuable as that of other professionals, and we should always be compensated for our time and effort. This is especially true when the client is a big corporation with a lot of money.”

This is spec work.

Clients who expect to be presented with finished products without paying for them and pit designers against one another for that work are exploitative.

Ubisoft is developing this, ffs. They can afford to fucking pay you. They just don't want to. https://t.co/AOSqqWQEeD

Huge oversight. There needs to be incredible clarity on this process. Spec work is bad for creators, especially if you hand over ownership of material on submission. They need to be EXTREMELY UP FRONT about what the terms are. https://t.co/befmhRoxsh

god, everything in this thread— “””paid””” spec work is still spec work, my friends! Even if you’re getting paid, there are hundreds or thousands of hardworking artists who aren’t. There’s the rub. https://t.co/NmJo194d6J

I was bombarded with spec work "offers" when I first started freelancing, and it's hard to say no. I was hungry for jobs, and literally hungry (needed money to feed myself), and willing to take anything if it lead to a paycheck. I learned that chasing spec work made me no money.

LRT: spec work is exactly what Ubisoft's partner hitRECord is about, and it's jarring to see companies with tons of money willingly pair with what is essentially a crowdsourced pick-me pool of unpaid artists who surrender the rights to their work for a slim chance at a check.

Daily Dot reached out to HitRECord for comment through email but did not hear back from the company by publishing time. Gordon-Levitt did give an interview to Mashable shortly after the announcement, stating “It’s so important that the conversation is happening, because the last thing I would ever want to do with HitRecord is be exploitative.”