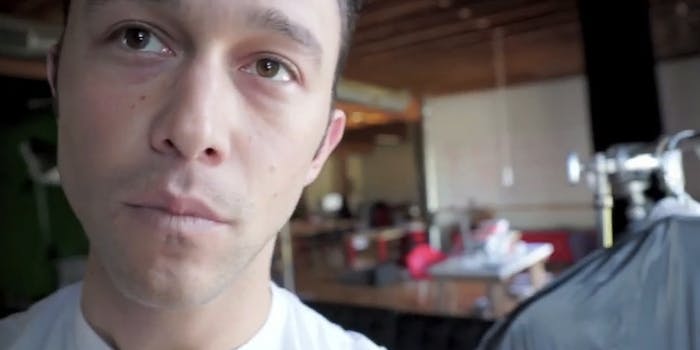 Joseph Gordon-Levitt and 1,400 collaborators brought you this TV episode

When Joseph Gordon-Levitt first announced his plans to launch collaborative production company HitRECord back in 2010 with his brother Daniel, it looked like a bit of good PR for the acting-singing-dancing triple threat, more than an actual means to create movies, television, music, and everything in between.

Just three years later, HitRECord On TV is about to launch on new cable network Pivot, and HitRECord has posted their first episode online today.

HitRECord On TV, which launches on Jan. 18 with two back-to-back episodes, is Gordon-Levitt’s collaborative take on a modern-day variety show. It features Gordon-Levitt’s video musings on the theme of the episode, anchored throughout by crowdsourced collaborations that relate to the theme. The premiere episode, entitled “The Number 1,” is equal parts vaudevillian and modern, just as you’d expect vintage-suit wearing camera-toting Gordon-Levitt to be. Though the show is burdened with the expected lengthy explanations of how HitRECord works, exposition that is generally cumbersome in most other shows and movies is damn near inspirational with Gordon-Levitt at the helm.

The first short film, “First Stars I See Tonight,” shows exactly how a HitRECord collaboration works. Collaborator Roswellgray posted a story about growing up vision-impaired and seeing stars for the first time. Multiple users submitted voice recordings of the story, one of which was selected as the narration for the film. Gordon-Levitt recruited actors Elle Fanning and James Patrick Stuart to act the short out in front of a green screen, then threw up a call for visual artists to animate and musicians to score the film.

Despite snapshots of the collaboration process throughout his explanation, the sheer level of work that went into Roswellgray’s short isn’t truly felt until the first scene, when you see a title card (a common occurrence on every HitRECord project) showing exactly how many “records” went into the film: 12 videos, 75 images, 5 texts, 13 audio, all made possible by 1,440 contributions.

The show picks up the pace after “First Stars I See Tonight,” with Gordon-Levitt’s HitRECord avatar RegularJOE calling for more collaborations–an animated short on sound combatting silence, and a hauntingly beautiful song “You’re Not The Only One,” which Gordon-Levitt wrote after asking for musical chord submissions. Discussions on the theme are interspersed among the sketches, complete with mini-videos created by (who else?) HitRECord collaborators.

Ultimately, gimmicks and new endeavors can only succeed if they’re as engaging as they are innovative, so the real question is whether the HitRECord on TV content is any good. Having gone into this with low expectations, especially for a half-hour variety show, I could not have been more impressed, both with what Gordon-Levitt achieved in a way to disrupt television, but with the actual quality of the work he produced.

“First Stars I See Tonight” was no doubt boosted by help from JGL’s actor friends, but the story and the animation was par excellence, and from creators I would likely never have heard of otherwise.

“You’re Not The Only One,” performed by Gordon-Levitt and a network of collaborators, has all the catchiness of a Sara Bareilles song destined to be stuck in your head for a summer. While not every sketch is likely to be a hit, giving each episode a theme at least ties even the lackluster sketches together in ways that current variety shows can’t.

And when discussing “current variety shows,” therein lies the rub: There really aren’t current variety shows. The closest comparisons lie somewhere between Saturday Night Live and America’s Got Talent, but HitRECord on TV is nowhere near a sketch comedy show, and digs a little deeper than 90-second chunks of showcasing Hollywood hopefuls. While the show, and Gordon-Levitt’s perma-good nature, can veer into the overly-twee at times (see: similar backlash against JGL’s 500 Days of Summer costar Zooey Deschanel), the content is unlike what we’ve seen on mainstream TV of late, and it’s beyond refreshing.

Indie musicians, successful animators like Don Hertzfeldt, even YouTube sensations with millions of followers have existed on the periphery of mainstream culture for years. By connecting them to each other and showcasing their work in a mainstream medium, Gordon-Levitt is showing Hollywood just how powerful productions can be, even those that hail from far, far outside the studio system.