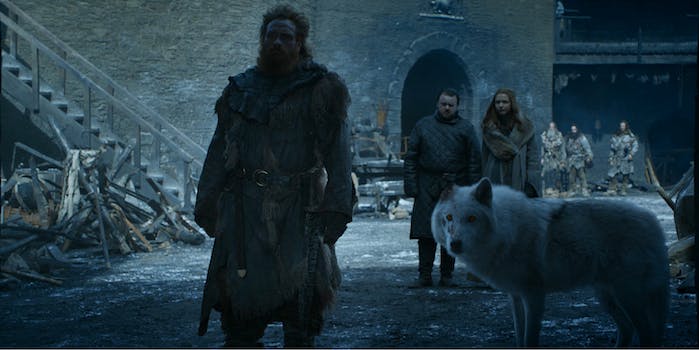 How could Jon Snow be so cold??

Ghost is, without question, the goodest boy on HBO’s Game of Thrones. When Jon Snow sent him north on Sunday without so much as a pat, fans were furious. Now we know what went into that cold goodbye.

Jon’s beloved direwolf has been with him since the very first episode. Ghost traveled to the Wall with Jon, protected both he and Samwell time and again, and even kept vigil over Jon’s body long after all life had left it. He fought in the Battle of Castle Black and the Battle of Winterfell. He’s been a loyal companion to Jon for eight long seasons.

Me after I saw that jon didn’t even said goodbye to ghost #GameOfThrones pic.twitter.com/GlDeNjNY4C

Ghost on the outside: *Holding it together*
Ghost on the inside:#GameofThrones pic.twitter.com/j5tPUsaNxY

After asking Tormund to take him north of the Wall, Jon gave Ghost a solemn, mournful look and walked away. Devastated fans couldn’t help but ask why he didn’t even approach his longtime companion before sending him away forever.

Thankfully, the episode’s director has some answers. David Nutter spoke to the Huffington Post this week about the decision to keep the scene brief and clean. “Since the direwolves are kind of CG creations, we felt it best to keep it as simple as possible,” he said. In another recent interview, this time with the New York Times, he also conceded that CGI restrictions were “very much” the reason we didn’t see a more intimate goodbye.

Though fans are still disappointed by the lack of a heartfelt moment between two longtime companions, the explanation makes sense. It turns out that digitally creating a realistic wolf twice the size of a normal man is costly. A 2017 Business Insider interview with the director of the Battle of the Bastards revealed that Ghost was intended to make an appearance in Jon’s final showdown with Ramsay.

“It’s also an incredibly time consuming and expensive character to bring to life,” director Miguel Sapochnik told Business Insider. “Ultimately, we had to choose between Wun-Wun and the direwolf, so the dog bit the dust.”

Ghost is one of two remaining Stark direwolves. He and Nymeria have both been freed by their former masters to live in the wild as they were intended to. Fans were disappointed to find out that the last two episodes will lack any contributions from the Starks’ loyal furbabies, but at least we know Ghost is roaming free.

Need more news from beyond the Wall? Sign up hereto receive our weekly Game of Thrones newsletter from in-house expert Michelle Jaworski.