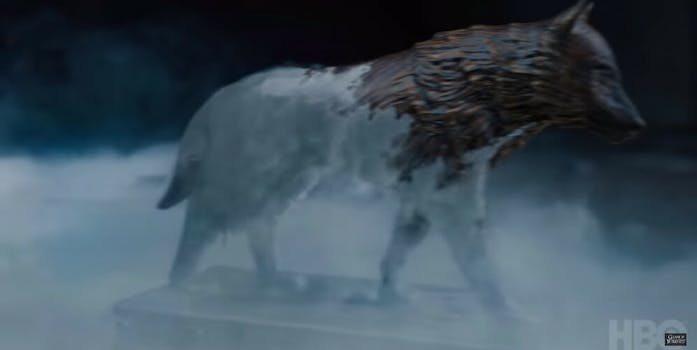 Fans are already cooking up theories.

Hold everything: the first teaser for Game of Thrones season 8 just dropped. Fans will have to wait until April 2019 to watch it, but HBO left a lot of juicy clues as to what we can expect in the series’ conclusion.

The trailer depicts a map of Westeros viewers saw often in season 7 as Daenerys Targaryen planned her various political maneuvers and battles to seize control of the region. Frost, symbolizing the growing threat of the White Walkers from the north, bears down on the continent, overtaking statues of a wolf—the symbol for House Stark—and a dragon, which we can assume represents House Targaryen.

Fire blazes from the south, engulfing a lion—aka House Lannister—before clashing with the encroaching frost and forming a ridge of dark rock (dragon glass maybe; the only weakness of the zombie-esque White Walkers?). There are already plenty of theories for what it all means, with some claiming that where the fire and ice meet indicates where the series’ epic last battle will begin, or that the order of family crests being consumed reflects who will come out victorious against whom.

● It looks like there is a dragon glass wall being made at the Neck
● Cersei is going Mad
● Wildfire involved
● There will be a fight at the Neck.
● Wolf and Dragon froze but the Lion burned.. what does this mean?

Other fans were too busy freaking out to have time for theorizing.

The short teaser trailer will surely continue to be dissected over and over until Game of Thrones’ rabid fanbase gets more crumbs of information. But whatever’s going on in, Game of Thrones season 8 promises to be an epic final showdown.

What we know so far about ‘Game of Thrones’ season 8