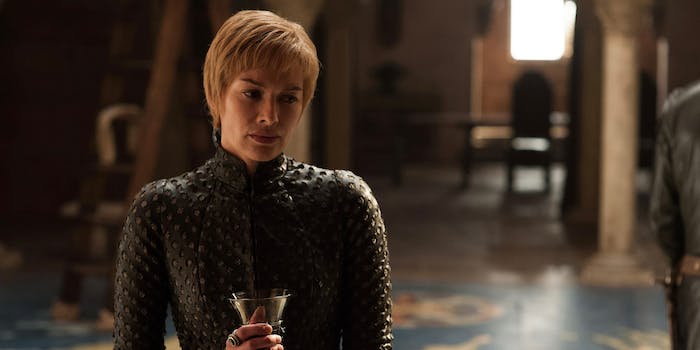 Warning: This article contains spoilers for the most recent Game of Thrones episode, “The Queen’s Justice.”

In a dark but surprisingly poetic series of events, Cersei Lannister finally got revenge for two of her children’s deaths.

Cersei is known for her creative acts of cruelty. Her removal of the High Sparrow, his followers, and all of her courtly rivals last season in a ball of flames seemed to be the high point of her vicious payback, but tonight’s episode saw her reach new heights of savagery. She finally got her hands on Ellaria Sand, her daughter’s killer, delivered to her by Euron Greyjoy.

During the final episode of season 5 titled “Mother’s Mercy,” Ellaria decided to avenge the death of her lover Oberyn Martell by killing Cersei’s only daughter, Myrcella. The poison that she coated her lips with to take Myrcella’s life (via goodbye kiss) resurfaced tonight when Cersei used it on Ellaria’s chained and helpless daughter Tyene. To perfectly parallel her own daughter’s death, Cersei even delivered the poison with a kiss.

The scene was heartbreaking, regardless of your views of Ellaria. Cersei’s retribution crosses into savagery with her promise that Ellaria will live to watch her daughter die and rot, just out of reach. The two prisoners straining for one another in the dungeon cell as the scene faded away was brutal, as was the look of satisfaction on Cersei’s face.

And Myrcella’s death wasn’t the only one of Cersei’s children she avenged in the episode, titled “The Queen’s Justice,” though neither Cercei nor her brother, Jamie, knew it beforehand.

Joffrey Baratheon, Cersei’s oldest son (and admittedly one of the shows most hated characters), died by poisoning at the Purple Wedding in season 4. The identity of his killers—Olenna Tyrell and Petyr Baelish—was revealed two episodes later, though Cersei always believed her brother Tyrion was responsible.

Olenna Tyrell, the Queen of Thorns—a fan favorite on Game of Thrones for her biting dialogue and no-nonsense attitude—was forced to poison herself in the final moments of this episode after the Lannister army sacked Highgarden. To be fair, she was still breathing as the screen faded to black, but the poison she ingested almost certainly did its job.

After downing the wine, which Jamie Lannister promised would cause her no pain, Olenna won the night with her admission of her role in Joffrey’s death. Her final words to Jamie turned the entire interaction on its head, allowing Olenna the upper hand even as she dies. Her death mirroring Joffrey’s almost certainly wasn’t lost of fans of the show, but Olenna remarked on it too, to really drive the point home.

The fact that Cersei showed the restraint in allowing Olenna a painless death, considering the possible horrors Jamie outlined in his final discussion with the last Tyrell, is a relief. Fans worried last week that her increasingly violent behavior could be her undoing. Of course that’s still a very real possibility should the tide of war turn against her.

And let’s see how she takes the news about the true source of her eldest child’s horrific death.