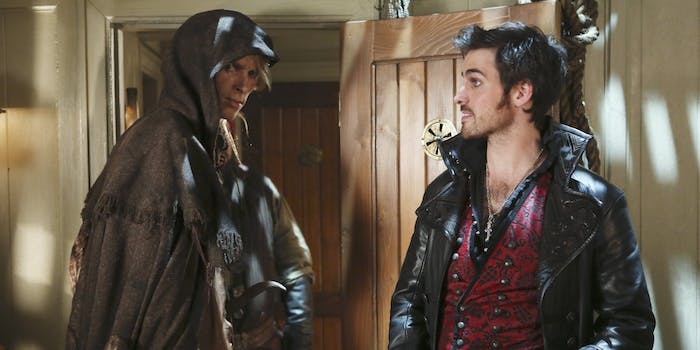 Keeping up with Once Upon a Time from an outsider's perspective may be just as entertaining as watching the actual show. It certainly can’t be much more confusing.

Keeping up with Once Upon a Time from an outsider’s perspective may be just as entertaining as watching the actual show. It certainly can’t be much more confusing.

Fantasy TV shows aren’t exactly thin on the ground right now. Likewise, soap operas with overly convoluted character relationships are hardly a new thing. But Once Upon a Time (or OUAT, as it is unpronounceably referred to by its online fanbase) combines both of those elements, played out by a cast of Disney characters. Actual Disney characters, because the show runs on the Disney-owned ABC network, meaning they have access to Prince Charming, all the Disney Princesses, and the entire cast of Peter Pan.

The end result is a show in which characters from Brothers Grimm stories, Frankenstein, and 101 Dalmatians all hang out together in present-day Maine, embroiled in a tangled web of relationships that would make most Days of Our Lives viewers’ heads spin. It’s a wonder, then, that the show’s fandom isn’t even more reactive than it already is. Sure, there’s been some upset over the showrunners’ apparent rejection of the super-popular “femslash” pairing known as SwanQueen, but fans have kept watching. And in this week’s episode, “Think Lovely Thoughts,” they were rewarded with what may be (spoiler alert) OUAT’s pinnacle of ridiculousness so far.

We’re going to give this to you in bullet points, purely because you might have to take a mental breather halfway through. Making sense Once Upon a Time storylines is not for the faint of heart:

There’s also the whole issue of familial relationships, which OUAT blogger Abbie Imagine attempted to parse when she mapped out the family tree of the show’s central characters. Good luck keeping track of this when you’re watching the show. 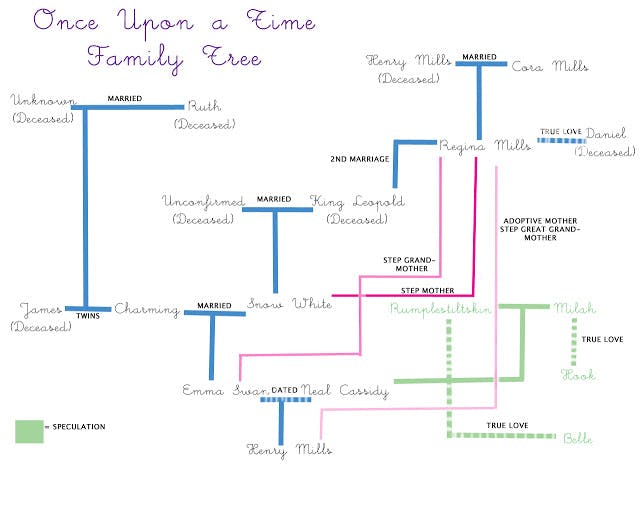 She also points out that thanks to time differences between the “real” and fairytale worlds within the show, Snow White and Prince Charming (both around 30) have a 28-year-old child and an 11-year-old grandchild, Henry … whose adoptive mother, the Queen of Hearts, is also his step-grandmother from a previous marriage. And Rumplestiltskin is his grandfather. As Tumblr user geekalogian put it:

at this point, when Henry starts dating he’s going to have to research the genealogy of his girlfriend back like five generations just to make sure he has absolutely no biological connection to her in any way

“Henry, why are you looking up the names of all of my cousins??”

On second thought, maybe we’re better off keeping up with this show from a safe distance. Even if it does star Marilyn Manson as the CGI shadow of Robert Carlyle’s teenage father.