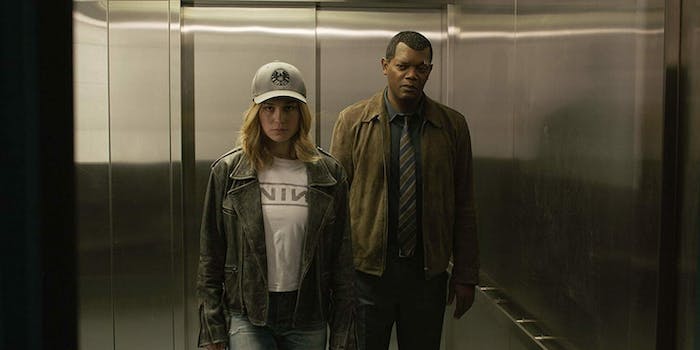 The term “plot hole” has its uses, but with the rise of YouTube critics like CinemaSins (known for its “Everything Wrong With…” review series), it’s become annoyingly overused.

When a filmmaker decides not to explicitly show something on-screen, it’s not necessarily a plot hole, it’s just a choice to leave things to the imagination. But some people either want films to be airtight logic puzzles or enjoy feeling like they’ve noticed a hidden mistake before everyone else. Strangely enough, these intrepid plot hole detectives often focus their attention on female-led blockbusters like The Last Jedi, Ghostbusters, and Captain Marvel.

In Captain Marvel’s case, there have been some complaints about Nick Fury’s pager. Namely, why didn’t he use it to call Captain Marvel for help before Avengers: Infinity War, like when aliens were attacking New York in The Avengers? Happily, we now have an official answer. Slashfilm’s Peter Sciretta asked Marvel Studios boss Kevin Feige, who offered a two-part answer. First, “she does say it’s gotta be a real emergency,” which explains why Fury didn’t call during the Chitauri invasion—a contained attack that the Avengers already had in hand. (Samuel L. Jackson gave a similar explanation to IGN.) Secondly, there’s this:

“The other thing I’d say is how do you know he never hit it? How do we know he never pushed it before? We’ve never seen him push it before. That doesn’t mean he never did.”

So there you have it. Maybe Nick Fury has hit that pager button in the past, and it just didn’t happen on-screen. The MCU’s worldbuilding is an iceberg where the movie canon is visible above the surface, supported by a ton of implied background canon from the comics and elsewhere. For instance, when fans commented that Steve Rogers and Bucky Barnes had a weirdly casual reunion in Infinity War, the filmmakers explained that the characters had been skyping between movies.

Compared to out-of-nowhere revelations like Hawkeye’s secret family, Fury’s pager does not seem like a big deal. It’s a textbook example of a detail that (like so many details in superhero comics) gets added to canon at a later date, and we can all just accept was there all along. Kind of like how the original Secret Invasion comics relied on us believing that certain characters had secretly been Skrulls for years. So if Marvel fans can handle that, they should be able to handle the non-mystery of Fury’s pager.