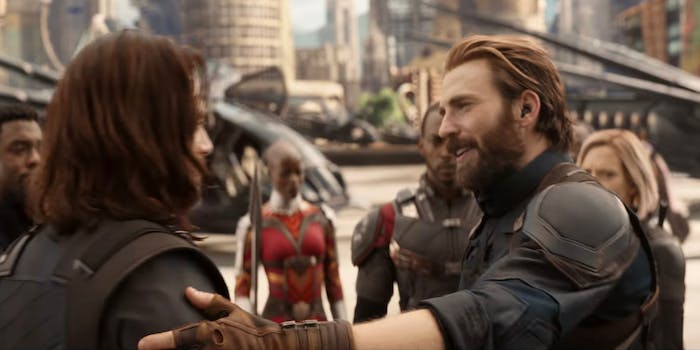 That explains the lukewarm reunion.

Of all of the superhero meetups in Avengers: Infinity War, fans were looking most forward to one that we’ve already seen. But if the reunion of Steve Rogers and Bucky Barnes after Bucky’s mind was repaired felt like a bit of a letdown, there’s a perfectly good reason for it.

Watching Steve react to seeing Bucky—the only person he knows from his old life who was still alive—turn into dust before his eyes was devastating. It had been two years since Steve dropped Bucky off in Captain America: Civil War, and they had only just reunited on-screen. But their meeting seemed rather casual for two people with so much history seeing one another again for the first time in two years. It was fine, but definitely not the kind of big moment some fans had been hoping for.

As it turns out, it probably wasn’t their first reunion since Civil War. The Russo Brothers said as much during an AOL BUILD Series interview, and the Infinity War screenwriters offered their own take on what Steve and Bucky went through in the two-year gap between Civil War and Infinity War in a spoiler-filled interview with Collider.

Stephen McFeely and Christopher Markus are asked by Collider about Steve and Bucky’s first reunion (it starts around the 8:40 mark), and while they didn’t go too deep into specifics, McFeely noted that it was more casual because Steve had probably already had that emotional reunion.

“In the two years that Natasha, Sam, and Steve were insurgents, they probably had cause to go back to Wakanda, hideout, move on from there, etc.,” Stephen McFeely explained. “So yeah, I think once Bucky got—that Shuri, more or less, was successful in sort of repairing his mind, there was a big ‘oh my god I got that guy back’ moment.”

Even at the end of Black Panther, Bucky appears to have been healed for some time, giving Steve and Bucky plenty of time for off-screen reunions and hangouts in Wakanda while Steve evaded law enforcement. Markus’ reading is a little less generous but it still gives a great visual for fans to imagine.

“I mean, at the very least, Cap was aware of his progress,” Markus added. “You know, maybe they Skyped.”

Granted, Infinity War was already nearly three hours long and had plenty of humor (and chances are Wakanda might have a better video chat function than Skype), but it feels like Marvel may have missed a golden opportunity here.

steve and bucky skyped each other and marvel didn’t show us a single bit of it…… do marvel not know how much money i’d spend to watch two 100 year old boyfriends try and figure out how to use skype?

You can watch the entire interview below.