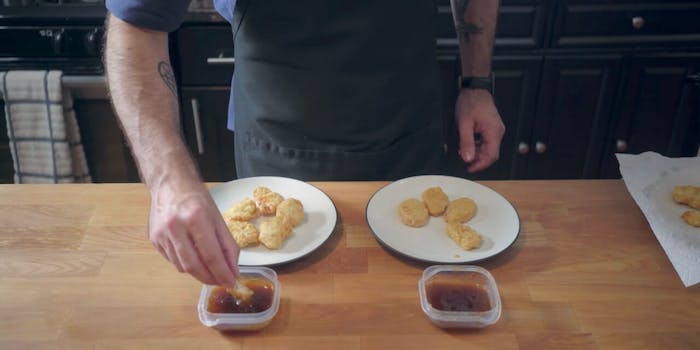 Screengrab via Binging With Babish/YouTube

How do they compare?

The sample came from David Wasman, who won one of the three tubs of Szechuan sauce McDonald’s gave away. He wanted Rea to compare it to the different sauces he made. And Rea delivered after he finally got to taste the real thing for himself.

Spoiler alert: It might not have lived up to the nearly impossible expectations set by Rick Sanchez, who traveled deep into his memory to have it again.

“And to be honest it tastes… just OK,” he said. “You know, I mean, it’s probably one of those things that tastes better once it’s on an actual nugget.”

His roommate couldn’t really tell the difference between the homemade sauce and the real thing.

As for what his personal preference is among all of the Szechuan sauces he’s tried, McDonald’s official sauce doesn’t quite live up to expectations.

“Better than the McD’s sauces mixed together, worse than /u/xeropoint‘s or the legit Szechuan Sauce,” he said.

And you know, there’s now a way to see if we feel the same way.