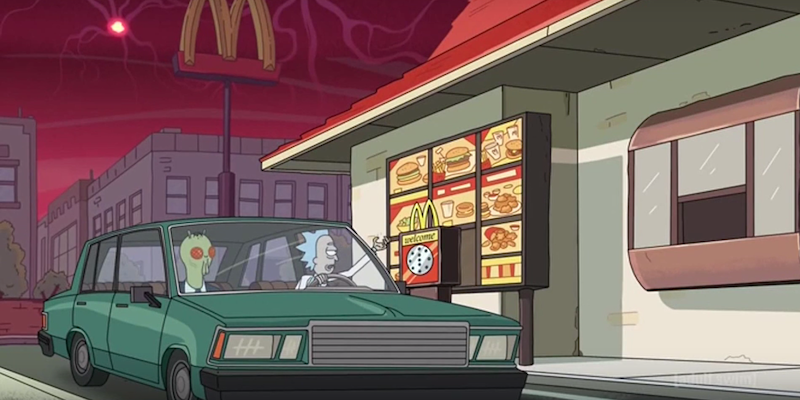 You know what you have to do.

If you suddenly have a craving for McDonald’s chicken nuggets dunked in an obscure dipping sauce from 1998, you’re probably a Rick and Morty fan.

The cult favorite animated series surprised fans on Saturday night by airing the highly anticipated season 3 premiere unannounced. Like most episodes, it was full of references not only to prior jokes from the show, but also to oddball stuff like Shoney’s restaurants. But the bit that really resonated with fans was Rick’s sudden obsession with the limited-edition Szechuan sauce McDonald’s released to promote Disney’s Mulan.

The beauty of the reference is that it’s so bizarrely obscure, like finding a bit of product tie-in gold in a wasteland of marketing drivel.

Now McDonald’s almost assuredly did not know this little plug was coming (and that fact is critical for the pure beauty of this). Rick and Morty fans have already popped up a change.org petition to bring back the sauce, and the show’s official Twitter account jokingly reached out.

.@McDonalds
you wanna get in on this?
Call me.

Followed by a seemingly positive response from a McDonald’s corporate chef.

I'll see what I can do

So now we stand at a precipice. Will McDonald’s leave it at that, or will it give itself over to the whims of viral media?

It’s no secret that McDonald’s has been struggling in recent years as America—and especially millennials—gravitate toward fresher options from grocery stores and fast-casual chains like Chipotle or Panera Bread. The hamburger behemoth has tried hard to win back customers with all-day breakfast and by announcing some of its burgers would be made with fresh not frozen beef (to which Wendy’s got in a good social media jab).

But what Rick and Morty has served the fast food chain on a silver platter is a surefire way to endear itself to that fussy audience of 18- to 35-year-olds (only one in five of which has ever even tried a Big Mac).

Companies try to manufacture this kind of serendipitous audience interaction all the time. Take, for instance, when Reebok attempted to tap into the Aliens franchise fandom by offering “Alien Stomper” boots like those worn in the 1986 movie. The shoes launched on a completely made-up holiday meant to mimic Back the Future Day (which celebrated a real date from the film). Unfortunately any excitement Reebok drummed up was quickly destroyed after it 1) failed to list Ripley’s iconic shoes in women’s sizes, and 2) made so few pairs almost nobody could get them. Instead of being a heroic deliverer of cool stuff, Reebok just managed to piss off the very people it was trying to reach.

But in this case, fans are already asking McDonald’s for Mulan sauce as part of an inside joke. All McDonald’s has to do is recognize that the “cool” thing to do is deliver the punchline by bringing the sauce back. It’s an opportunity to tell millennials that you’re not just a giant, soulless corporation—you’re a giant, soulless corporation that goes out of its way to give us something that’s harmlessly fun.

If there’s any question about whether or not people really want the sauce, just look at Twitter.

Damn it Rick & Morty. Now I'm not going to be able to leave this life without knowing what that freaking sauce tastes like #szechuansauce

Screw it. If @McDonalds doesnt bring back the #SzechuanSauce, @Wendys, go for it. @JustinRoiland @RickandMorty @danharmon

Don’t mess this up, Micky D’s. If you do it right, we’ll all definitely want fries with that.