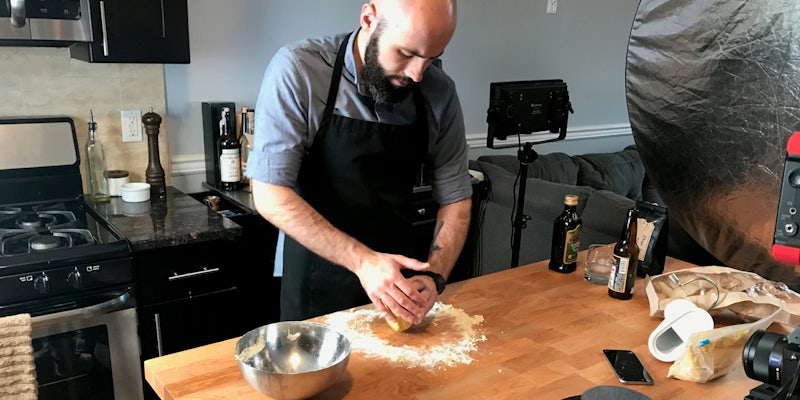 In the kitchen with Andrew Rea, the master behind ‘Binging With Babish’

Is Andrew Rea as chill as he seems on his show?

After launching on a lark to test out new lighting equipment he’d bought to pick up some freelancing work, Rea set about crafting Il Timpano, an absurdly elaborate and ridiculously time-intensive dish from Stanley Tucci’s Big Night.

It’s a show-stopping meal, one which requires a sauce to simmer for hours, pasta to be hand-rolled, meatballs of veal, pork, and beef made from scratch, as well as some hard-boiled eggs and salami, all stuffed into a dough-lined Dutch oven.

When Rea flipped it over after a few hours in the oven, he had no idea what was about to happen.

Instead, it slipped out golden brown, and Binging With Babish is now his full-time job.

In his kitchen in Harlem almost a year and a half later, Rea is inspecting a pasta extruder he’d purchased for $179 that morning at Williams-Sonoma.

“It’s amazing no one has made a knockoff of these,” he said of the KitchenAid attachment, somewhat bemoaning the price. “It’s just cheap plastic.”

But it’s not Rea’s style to skimp on any aspect that goes into recreating recipes from pop culture. And in Master of None’s first season, Aziz Ansari was given that same extruder from his girlfriend Rachel, which he neglected to use and which became the locus of a fight between the couple.

It’s this passion for the most minute of details that really sets Rea’s show apart from others and helps explain its soaring popularity—despite the fact that he’s not the first person to do the concept.

“It’s not an original idea,” he readily says, but no else online seems to go to quite the absurd lengths he does to make everything exactly so.

There’s the $50 carving fork he got so he could properly twirl the Pasta Aglio e Olio Jon Favreau serves Scarlett Johansson in Chef, and the $90 he spent on sheets of edible gold to decorate a scoop of ice cream just how Alec Baldwin likes it in 30 Rock, then there’s the $75 worth of Iberico ham and $70 worth of truffles he purchased to make Archer’s Eggs Woodhouse.

Rea is fastidious to an almost absurd degree. Moments after I arrive, he heads to his room to iron his apron. Standing in front of his camera, patting it down, he determines, even though it’s wrinkle-free, it’s not OK. So he heads back to hit it again. His signature start to his show, which is just him walking into the camera’s field of view in his kitchen, takes him four tries.

Rea won’t do recipes he can’t faithfully recreate from what’s been told to him onscreen, and that hurdle, right now, is preventing him from putting forth his far and away most requested dish.

“Everyone wants me to do the Krabby Patty,” he said.

No ingredients are given for it, and though there are already plenty of recipes online for Spongebob Squarepants’ signature hamburger, none meet his standard. He’s been consumed with discovering over the only thing listed, King Neptune’s Poseidon Powder, for forever now.

It’s that same obsessiveness that almost got him into trouble. Rea said that filming the show drove him nearly $10,000 into debt, as he procured the exact equipment, the right ingredients, and the same kitchen tools essential to the project.

“I’m taking a risk here to do something I really enjoy and really love, and you only get so many opportunities to do that,” he said about the decision to really dive into the project. But his dedication has paid off. Rea now has a Patreon that covers his expenses, his first book is coming out soon, and he’s about to launch a second YouTube show, Basics With Babish, where he will teach kitchen skills, this summer.

And he just gave notice to his full-time job that he’s now Babish full-time.

But the affable host and chef is having trouble with Aziz Ansari’s carbonara.

The dough came easy, and as he’s kneading it, he pauses to apologize for how silly he looks doing so.

“Sorry,” he says, “but this is how he does it in the show,” jamming his palms through the dough and into the table. Indeed, when we check the episode later, his motions perfectly mimic Ansari’s onscreen actions.

Still, the noodles are befuddling him. First, there’s the size. Was Aziz making bucatini, or was he making spaghetti? Rea vacillates between the two before stopping and pulling up the episode, but he still can’t quite tell.

“I’ve been on shoots where they don’t care about continuity,” he says. “It looks better coming out [of the extruder] as bucatini, but it looks better on the plate as spaghetti. So they do that.”

But it’s also his ability to smartly improvise that is part of the allure of the channel. When Adventure Time’s monstrous sandwich called for a lobster’s soul, he whipped up a lobster aioli.

Either way, his first batch of bucatini is failing him. It’s too sticky, and it breaks as it cooks, and it’s absolutely a disaster. It looks terrible. And he’s not willing to present something that isn’t right.

More flour goes into the dough, and he switches to the spaghetti attachment, and soon he’s pulling perfect pasta. But then the guanciale won’t render right. He cut it into too big chunks. 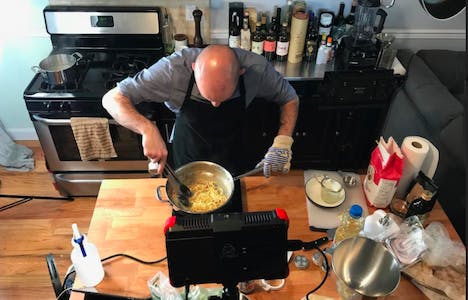 Meanwhile, it’s been three hours, and I’m wondering if I’ll ever get to eat some damn pasta.

Finally, he pulls all the meat out and sets it in a bowl.

“I’ll try again later,” Rea says, assuring me that, Timpano aside, failing on his first try is somewhat of a regularity. “I’ll be at this all night. I like making mistakes. People make mistakes when they cook.”

That honesty comes through on his channel. That he readily shows explosions from immersion blenders and scorched pans on his show is a testament to that. He’s entirely self-taught, and he wants people to know that the fun is less in the result than in the process.

So he goes to work on his sauce, this time rendering bacon for the base. He’ll try again with the guanciale later. The sauce, of eggs, parmesan, and black pepper, is still too thin, but that doesn’t stop him from wanting to try it, and he plates me a bowl.

The pasta is done exactly al dente, and though the soupy mixture won’t adhere to the noodles, I’m still sopping it up with hunks of bread. Even in its incorrect state, it’s hard to imagine Aziz Ansari serving anything better. Still, Rea’s frustrated, and you get the idea that had his Timpano failed, he wouldn’t have given it all up after all.

The next day, he texts to say he nailed it on the very next try, sending me pictures of perfectly plated twirls of pasta.

For all the episodes Babish has done so far, he has yet to attempt the one that inspired it all.

“I grew up watching Hook and there’s those pies made of neon whipped cream, and I remember being a kid and thinking I want that.”

No recipe is given for those, but if one person could make them right, it’s him.