The best superhero movies of 2017, ranked

It's been a great year. Aside from Superman's mustache.

Justice League was a disappointing conclusion to the year, but otherwise, 2017 gave us some of the best superhero movies in recent memory. Wonder Woman shook up Hollywood with its powerful and compassionate female lead, Thor: Ragnorok combined fast-paced comedy with political undertones, and Logan is an unexpected contender during Oscar season.

From the brilliant to the bizarre, here’s our rundown of the year’s superhero movies.

The best superhero movies of 2017

Logan is the perfect conclusion to Hugh Jackman‘s long tenure as Wolverine, reintroducing him as an old, weary veteran of a dystopian future. It’s the most sophisticated X-Men film to date, but don’t let that downplay the importance of earlier movies. Logan couldn’t exist without the rich backstory between Wolverine and Charles Xavier, along with the political worldbuilding we saw throughout the franchise.

From Dafne Keen’s feral performance as X-23, to the subtly clever futuristic details like the self-driving trucks, nearly every aspect of this movie was on-point. It has a plausible outsider chance for some Oscar nominations, and while it probably doesn’t deserve Best Picture ahead of Call Me By Your Name or The Shape of Water, Patrick Stewart surely deserves Best Supporting Actor. After 17 years playing Professor X as an amiable mentor, he finally got to stretch during Xavier’s troubled old age. Wonder Woman wasn’t just a great movie. It was a cultural phenomenon. It managed the near-impossible achievement of telling a fresh and entertaining origin story in 2017, after we all thought we were sick of the genre. It proved that women heroes can make bank at the box office. It even delivered a ray of hope for Warner Bros.’ DC franchise, whose other offerings are consistently sub-par. Romance, jokes, great action scenes—Wonder Woman had everything. This was surely a formative moment for the next generation of women filmmakers, and we can’t wait to see what Patty Jenkins does with the sequel. OK, Ragnarok and Wonder Woman are basically sharing second place on this list. Taika Waititi‘s sense of humor was a perfect match for the absurdity of the Thor franchise, rescuing it from the overly serious tone of Thor: The Dark World. The supporting cast members were brilliant (Jeff Goldblum! Tessa Thompson! Cate Blanchett! Mark Ruffalo!), and the production designers reveled in a rainbow-hued, Jack Kirby-inspired vision of the Marvel universe. It’s arguably one of the best comedies of 2017, and on top of that, it features some deceptively thoughtful political subtext. While most superhero movies trod through boring good-guy-defeats-bad-guy narratives, The Lego Batman Movie takes a refreshingly different tack. Will Arnett’s (hilarious) version of Batman desperately wants to be the cool kind of brooding hero, but as we watch him sulk around his lonely mansion eating lobster and watching Jerry McGuire, it’s clear he’s hiding a deeper pain. For this family-friendly version of the superhero, Batman’s greatest challenge isn’t defeating the bad guys—it’s letting love and friendship into his heart.

In another year, Spider-Man: Homecoming might have been number one on this list. The fact that it’s number five just highlights the quality of 2017’s superhero movies. Rebooting the franchise once again, Homecoming had a difficult job. It had to reintroduce a character that audiences were already sick of seeing, and do so in a fresh and entertaining way. It succeeded with aplomb. Tom Holland is hilarious and realistically youthful in a teen comedy that both returns to Spider-Man’s roots and updated the franchise with a diverse cast of contemporary characters. Zendaya won our hearts as Peter Parker’s grungy feminist friend Michelle, and Michael Keaton’s Vulture is one of the MCU’s greatest supervillains to date. The only downside was a rather pedestrian showdown in the final act, undercutting the overall message that Peter Parker should be a team player instead of trying to go it alone. 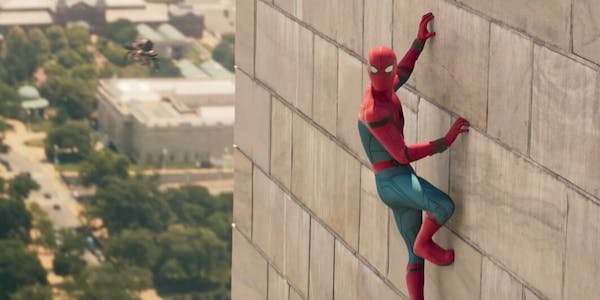 The first Guardians of the Galaxy movie was a breath of fresh air for the Marvel franchise, even if we weren’t especially impressed. The sequel, however, was disappointingly formulaic. It closely followed the original in a way that felt more cynical the second time around. We love a catchy soundtrack as much as the next person, but Guardians of the Galaxy Vol. 2 was a bland story with a toxic and sexist sense of humor, disguised by pretty special effects and some nostalgic music choices. (Although we do admit that Baby Groot is extremely cute.) From the “so bad it’s good” category, we bring you Russia’s answer to The Avengers.

The acting, writing and special effects are kind of dodgy, but Guardians is entertaining in the same way as Sharknado. It sees a team of Soviet superheroes (including a giant were-bear with a machine gun!) join forces against a mutant supervillain, culminating in some epic action sequences and displaying a refreshingly shameless attitude to superhero storytelling.

They spent millions of dollars to unconvincingly delete Henry Cavill’s mustache, transforming Superman into a CGI mutant. What more is there to say? Thelma‘s director might not be wholly pleased with the comparison, but this Norwegian thriller is everything we’d want to see in a lower-budget X-Men spinoff. It’s an intense coming-of-age story with hints of Carrie and Netflix’s The OA, following a university freshman as she explores her sexuality, discovers her superpowers, and rebels against her conservative religious parents.