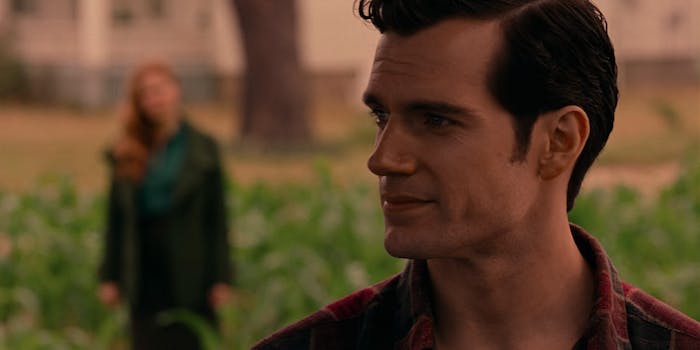 I mustache a question: why?

Justice League is a flawed film that’s sure to split audiences and critics, but viewers already have a handle on one of the film’s major hair-raising problems—one that we’re not supposed to see.

It’s not necessarily a spoiler in and of itself to say that Superman—who died at the end of Batman v Superman—is returning for Justice League, because he’s appeared in trailers via flashbacks. But some fans learned of his return in another manner. Back in July, reports emerged that Henry Cavill wasn’t allowed to shave off the mustache he grew for Mission: Impossible 6 for Justice League reshoots. So Warner Bros. said they would digitally remove it.

After hearing the news, some wished that DC had kept the mustache in.

“It’s nothing to cover it up,” Cavill told Fox 5 DC of the process to hide his facial hair. “What we do is we try to put it back on the top lip as much as possible. So they kind of wax it, wax it up. And then I had dots all over my face. And they try to put dots, which are barely visible, sort of in the various points on the face where you would see them during normal, not face replacement, but whatever CGI aspect they may be applying to a face. And yeah. I was covered in dots, and had a big mustache. It was definitely a new look for Superman.”

The story went away, and many fans forgot that Cavill’s mustache was even a question until people started watching the film for themselves. And shortly before the U.S. release of Justice League, a poor-quality screengrab of Cavill spread online.

Cavill is without his mustache, that’s for sure, but there’s something very wrong with how it came out.

Given the restrictions on Cavill’s ability to shave off his mustache, this is what Warner Bros. surmised was the best solution. Debates will emerge on how well the removal of Superman’s mustache was done, but for many fans, it was not done well at all.

JUSTICE LEAGUE EXEC: We can just CGI Henry Cavill’s mustache out it will be fine and not look weird at all
HENRY CAVILL: pic.twitter.com/Ag41j6LbPn

In fact, the call to just let Superman have a mustache is resurfacing. It’s not too out of the question; Superman can canonically grow a beard. And Cavill can actually pull a mustache off, so having one would have made Superman instantly more charming.

Please tell me the CGI mustache removal for Superman in Justice League is as weird and funny as it sounds.

You're given a choice between having Superman with a pretty charismatic mustache and this, what would you do? pic.twitter.com/0Wd6DWoiAU

Superman’s awful CGI mustache removal opens the film, signaling exactly what you’ll get: Something that resembles the #JusticeLeague, but isn’t quite right.

Shoulda just left the mustache in

On the other hand, if Warner Bros. let Cavill keep his mustache in the movie you’d had some scenes of him without it. But if it was too much trouble to CGI a mustache into scenes or have him reshoot others, you could just explain the case of the mysterious mustache as a Kryptonian quirk.

After all, it wouldn’t be the weirdest thing about that movie.