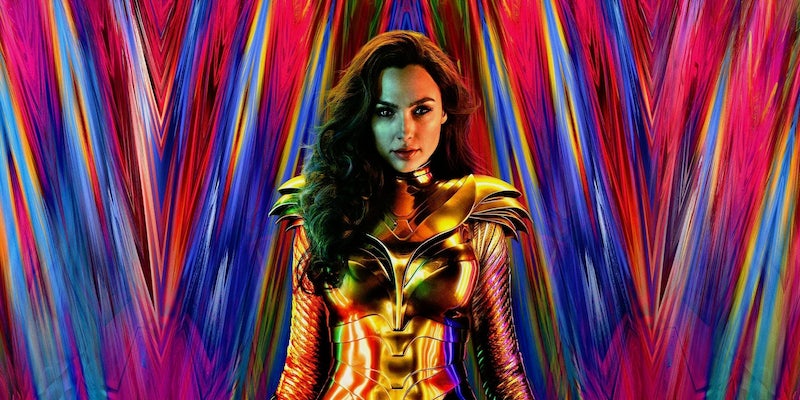 From casting news to spoiler-free info about the plot, here's everything we know about 'Wonder Woman 1984.'

The first trailer hits us with a blast of 1980s music and fashion, blending a fun nostalgia factor with badass action sequences. Without giving much away about the plot or overall themes, we meet the new characters played by Pedro Pascal and Kristen Wiig, along with the mysterious return of Steve Trevor (Chris Pine), decades after his apparent death. It teases everything we loved about the first movie – romance, adventure, comedy, awesome shiny fantasy armor – without feeling like a retread. Our expectations are already high!

One… year… from… TODAY… #WW84 pic.twitter.com/2LQllhixFJ

Steve Trevor died at the end of Wonder Woman after sacrificing himself to ensure that a plane full of deadly gas couldn’t harm anyone on the ground. Is this Steve Trevor the same man that saw in Wonder Woman, a descendant who is also named Steve Trevor (and looks exactly like Pine), a clone, or something else entirely? (It’s a comic book movie, so anything is possible. But the trailer does indeed suggest it’s the same guy, because we see Diana introducing him to the “future” and explaining what a trashcan is.)

Kristen Wiig plays a character called Barbara Minerva, aka the supervillain Cheetah. Minerva, as seen in the comics, is an archaeologist who’s hellbent on getting her hands on artifacts and has the ability to turn into Cheetah after seeking immortality and power. The trailer suggests she may have a kind of alter-ego in the movie, introducing her as a slightly dorky figure who reappears later with a more glamorous appearance.

Pedro Pascal also has a key role in the film, although until October 2019, Warner Bros. hadn’t confirmed who he was playing. Jenkins spilled the beans with an image of DC character Maxwell Lord, a supervillain whose businessman persona fits in with Pascal’s suit-wearing look in the movie.

Many fans hoped that Jenkins would return for Wonder Woman 2, and on Sept. 11 Variety confirmed that she would. The deal came after a lengthy negotiation process that took place over several months because Warner Bros. originally only hired Jenkins for one film.

Although the exact amount that Jenkins will receive for Wonder Woman 2 is unknown, her contract will include writing, directing, and producing credits along with a “substantial backend of box office grosses,” making her the highest-paid female director in Hollywood. Jenkins presumably had a lot more leverage at the negotiating table following Wonder Woman‘s massive success.

The screenplay was co-written by three people: Jenkins, longtime DC Comics writer Geoff Johns, and The Expendables writer Dave Callaham. Callaham’s involvement was revealed on Sept. 13, disappointing fans who hoped for another woman on the film’s core creative team. That being said, it seems that Callaham was personally recruited by Jenkins herself since they already worked together on a previous project.

Elena Anaya, who played the supervillain Dr. Poison, is contracted for multiple movies, so we may see her return. Jenkins didn’t completely rule out a comeback for Chris Pine’s character Steve Trevor, but that seems unlikely because Trevor is dead. And not the Winter Soldier kind of dead. Connie Nielsen and Robin Wright will reprise their roles as Queen Hippolyta and General Antiope in Justice League, but they haven’t been confirmed for Wonder Woman 2 yet. Oh, and Jenkins wants to recruit 1970s Wonder Woman star Lynda Carter for a cameo role! Here’s hoping.

Jenkins told Entertainment Weekly in 2017 that she already had a vision for Wonder Woman 2, taking place in the U.S. The story is expected to touch upon Cold War themes, and the trailer suggests it may also explore the consumerism of 1980s America.

Wonder Woman 1984 has more creative freedom than the other DCEU movies. Jenkins and co-writers won’t have to worry about tying into big events from films like Justice League because Wonder Woman 1984 takes place in the past, but to be honest, it looks like Warner Bros. is moving away from that era of the shared universe already. Justice League introduced Wonder Woman as a superhero who wasn’t really known to the public, but this movie makes it clear she was openly active in the 1980s, well within living memory for characters like Bruce Wayne.

Warner Bros. is now pushing back the release date of Wonder Woman 1984 by seven months. It was originally slated to drop Nov. 1, 2019, but it will now premiere June 5, 2020, which falls right in the middle of the summer blockbuster season and just over three years after the first film debuted in theaters. According to Warner Bros. president of domestic distribution Jeff Goldstein, it cited the first film’s successful release during the summer as to why it was making the move. (Wonder Woman was the third highest-grossing film of 2017.)

Warner Bros. plans to release Birds of Prey (and the Fantabulous Emancipation of One Harley Quinn) in February 2020, along with various new spinoffs in the works including The Batman starring Robert Pattinson.