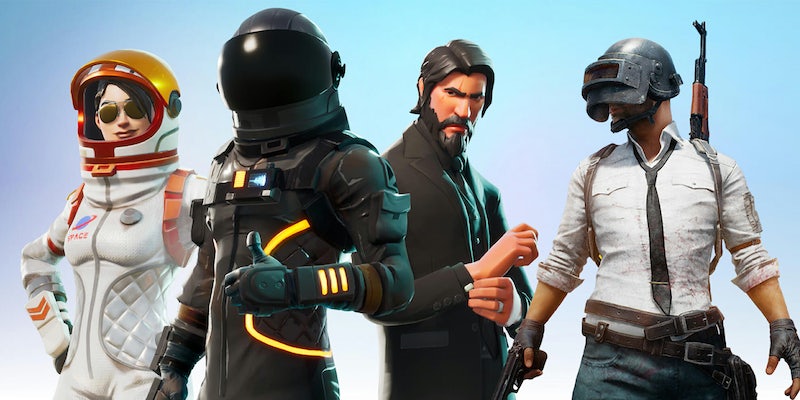 Here's what you need to know about the battle royale craze.

What began as one game developer’s tribute to his favorite genre has now swept the entire world. The term “battle royale” is something you’re probably seeing a lot these days. Just this week, huge names in gaming got in on the action with Call of Duty: Black Ops 4 and Battlefield V teasing possible battle royale modes of their own.

In a battle royale, somewhere around 100 players land on a single, shared map and duke it out with guns, vehicles, and improvised shenanigans until there’s just one player left standing. Sounds familiar, right? So why are so many games (both pre-existing franchises and new) getting into the battle royale genre? Let’s take a closer look.

There’s a big ol’ pool of money in battle royale

An answer so simple and obvious it feels like it should be screamed from a mountaintop: Money. By the time PlayerUnknown’s Battlegrounds—the game that precipitated the battle royale craze—finally exited its Stream early access period, it already held the record for concurrent players on Steam (3.1 million people actively playing at once). It sold more than 30 million copies, ending 2017 with $712 million in revenue, outpacing its closest competitor (Overwatch) by $332 million. To put that into perspective, PUBG earned 10 percent of all the money spent on PC games in 2017.

Epic’s Fortnite followed in PUBG’s footsteps, applying a more cartoony art style and making the game free-to-play. Less than 6 months later, research firm SuperData said that Fortnite had earned $126 million in revenue on PC in February of 2018, outpacing PUBG’s (still ludicrous) take of $103 million. That’s before you even account for Fortnite’s raking in $1 million per day on its mobile version.

In a world where large studios like Bungie and Activision spend $140 million to develop a game like Destiny, earning almost four times that in one year sounds like a pretty promising venture. Fewer and fewer studios are able to develop mid-tier games that can reliably compete with juggernauts like Battlefield 1 or the various Call of Duty titles, leaving players with a dearth of experiences smaller than the latest fantasy shooter or bigger than an artistically driven 2D indie game. The mobile and indie realms have always been rife with developers chasing the next big hook, but now even large studios must think six years ahead if they want to stay afloat—and promises of giant money bags don’t hurt.

Outside of mechanical accessibility, aesthetic also plays a huge factor in raking in the dough. It’s no coincidence that Fortnite and PUBG make much of their money from in-game clothing purchases or character skins that significantly alter their look. In a game with millions of identical, shabby-looking character models, it can feel nice to stand out from the crowd, especially if you’ve got people to impress. It’s a psychology also employed in games like Overwatch, which regularly updates with new event-based skins. After all, if you’ve been playing a game for over a year for free (or for a modest $30-$60 upfront), you can’t help but feel a little justified in spending a bit more to spice up your wardrobe. That’s music to most publisher’s ears.

Perhaps the most ironic appeal of the battle royale genre is how little battling there actually can be most of the time. Play any game of PUBG or Fortnite with friends, or just watch a casual stream, and you’ll quickly realize it’s less of an action-filled shooting game and more of a chatroom with bullets.

This element has allowed hundreds if not thousands of streamers to flourish in a world where viewing a game can be just as appealing as actually playing one. In a story out of social media star dreams, popular streamer Tyler “Ninja” Blevins teamed up with the rapper Drake to stream rounds of Fortnite, stirring both fanbases to positively freak out and smash every conceivable Twitch streaming record. We’re talking 600,000 concurrent viewers, vaulting over the previous record of 318,000.

For game studios looking to make a successful product, it’s all about one word: community.

Even more than regular content updates, a game’s community can keep it alive for as long as there’s interest. Games like PUBG, Fortnite, Overwatch, and Team Fortress 2 can last far beyond a normal game’s lifespan thanks to fan art, esports culture, and a constant stock of stuff to buy. Whether it’s your best mate or a streamer like Dr. Disrespect, there’s no better advertisement than watching someone you admire wear a cool new piece of clothing or pop a funny emote at just the right time.

If there’s one thing a game publisher likes to hear, it’s that their game can be a money-making machine for several years rather than just one. Even gargantuan franchises like Assassin’s Creed had to learn this the hard way when annual releases resulted in a subpar product and bad word of mouth for Assassin’s Creed: Unity. Developer Ubisoft took a year-long break from the franchise to regroup, later debuting Assassin’s Creed: Origins to high marks. Rather than continue to release increasingly tired annual installments, Ubisoft’s entire repertoire has been refitted for long-term content updates rather than yearly releases, with Ghost Recon: Wildlands just recently receiving its year-two update.

And really, would it surprise anyone if The Division 2 also announced a battle royale mode? Not really.

With Fortnite being the first major battle royale game to land successfully on console, it’s now become a race to see who can make the first big AAA-sized battle royale game and squeeze the last few dollars out of shooter fans everywhere. Whether it’s a cartoonish, kid-friendly romp or a brutally realistic military simulator, you can bet that every video game executive with dollar signs in their eyes will be pondering these points for the next big corporate meeting.