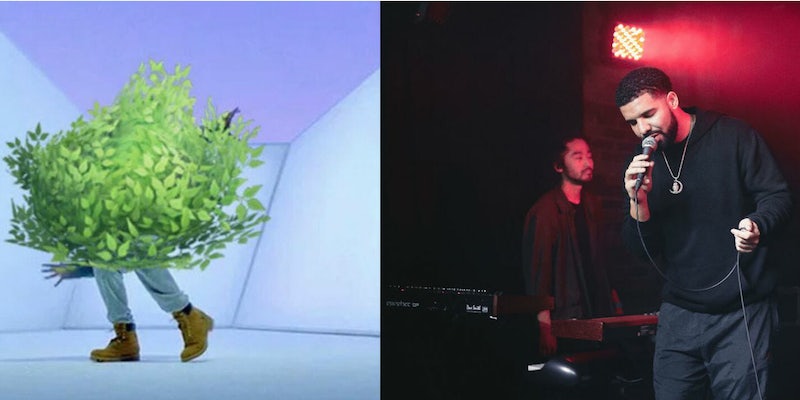 Fortnite will need to make some big moves if it’s going to convince people it’s more than a PlayerUnknown’s Battlegrounds clone. Last night, it took a huge step in the right direction.

At one point, the stream hit more than 630,000 concurrent viewers, nearly doubling the previous record of 388,000. The highest all-time concurrent viewership is 1.1 million during the Eleague Major: Boston 2018 Counter-Strike: Global Offensive tournament.

The session begins with Ninja playing Drake for a few rounds before bringing on the guest celebrities. You can see Drake’s video game skills in the clip below.

Snapshots of the team games featuring all three celebs can be seen here:

If you’re not familiar, Fortnite is a sandbox survival game where up to 100 players get thrown into an open world with the objective of being the last one standing. Essentially, the plot of the first two Hunger Games movies was turned into a gaming genre. The popularity of these titles began with PlayerUnknown’s Battlegrounds (or PUBG), an online battle royale shooter for Xbox and PC. When Fortnite‘s Battle Royale mode came along, it was branded a rip-off and dismissed by several critics. Since then, it’s become a phenomenon, attracting hundreds of thousands of livestream viewers.

One controversial strategy to succeeding in these survival shooters is to hide out and wait for the massacre to die down. This brings us to the defining moment of Wednesday’s stream: Drake hiding in a bush. The bizarre scene led to some epic memes.

Watching Drake run around as a bush is the greatest thing that's happened so far in 2018 pic.twitter.com/43qe8fbhYd

Only love my bush and my Momma, I'm sorry. @Ninja @Drake pic.twitter.com/MfFv0Yk5EV

At one point, Drake resuscitates Scott and says “God’s Plan,” a reference to the lead single of his latest EP Scary Hours. The phrase was adjusted to fit his new costume.

Other highlights include Drake talking up pineapple pizza and giving his thoughts on how Fortnite can improve. He believes the studio should continue to refine existing maps rather than create new ones. The singer also showed off his generosity by dropping precious weapons for his teammates.