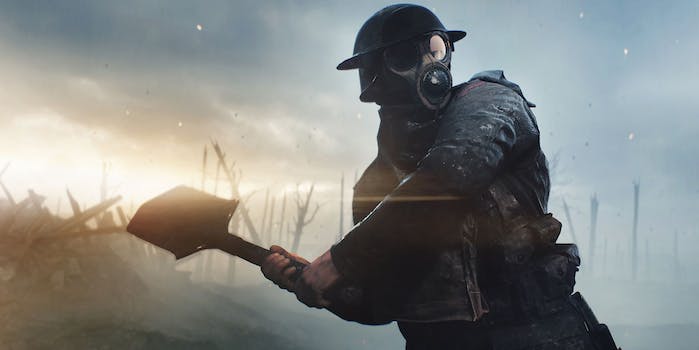 Review: Battlefield 1 moves the franchise forward by taking it to the past

A refreshing trip back in time.

Focusing on World War I, where automatic weapons were rare and combat tactics were far from refined, Battlefield 1 stands in sharp contrast to much of the modern shooter landscape.

Ever since the release of Call of Duty: Modern Warfare 2, first-person shooters have relentlessly marched into the future, with seemingly no end in sight. Call of Duty and Battlefield have been trying to one-up each other with more insane, futuristic weapons and gear for years now, and while Call of Duty: Infinite Warfare continues that trend, Battlefield has gone in the opposite direction. Betting on this formula was a calculated risk for developer Dice and publisher EA, but it’s one that has paid off in a big way. 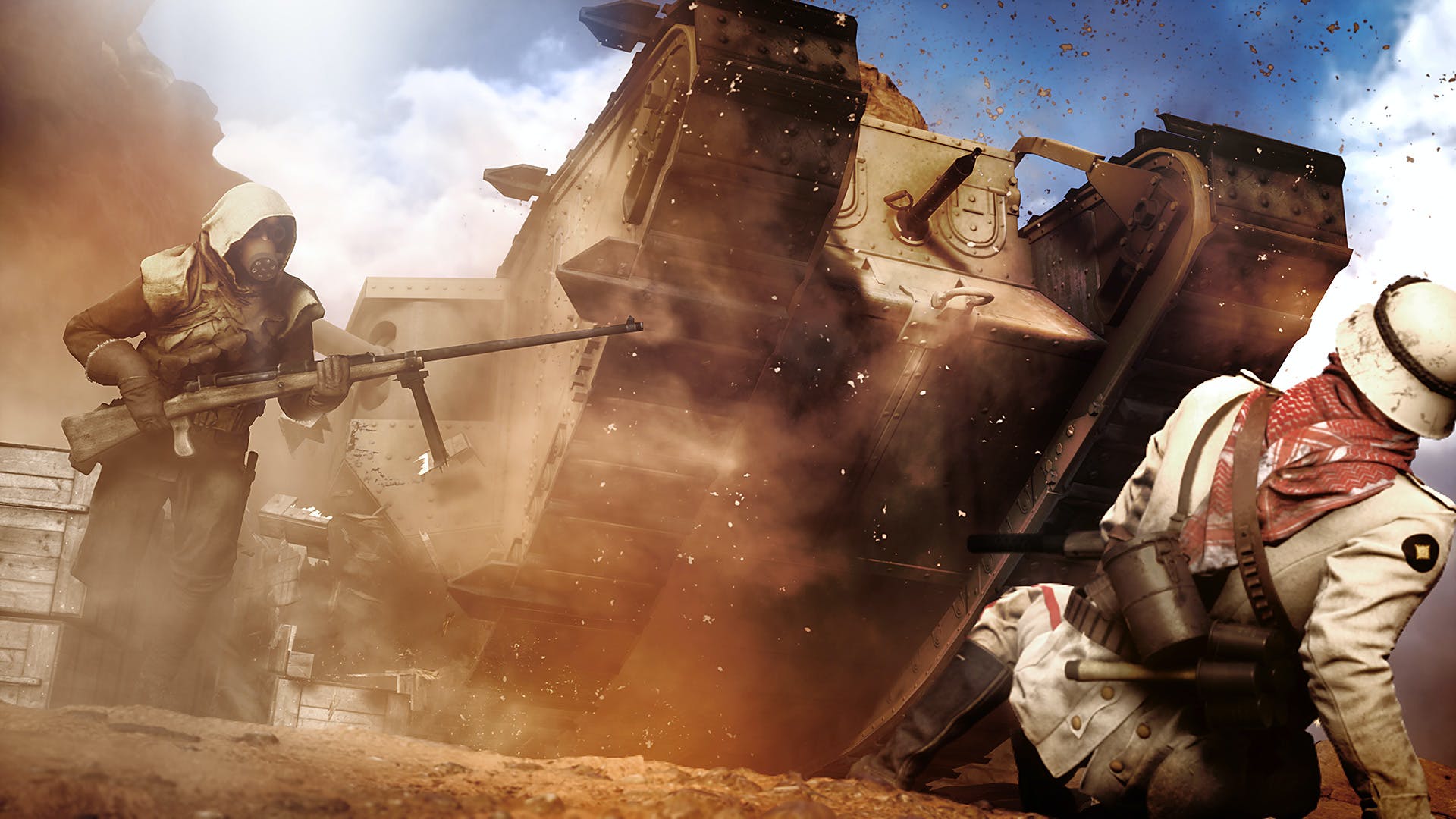 It’s not even really a return to the roots of the franchise, which debuted with Battlefield 1942 and got more and more modern over time, with the futuristic Battlefield 2142 throwing the franchise as far forward as it had ever gone. Battlefield 1, set primarily in the later years of World War 1, is a far cry from Battlefield 3, 4, and Hardline, but it’s a change of setting that was desperately needed. 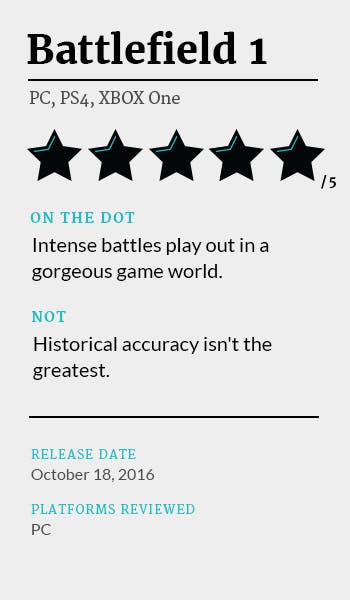 The story is broken up into several different “war stories” that play out in various historically accurate locations in Italy, France, Germany, and Turkey. There is no one central plot, which makes a lot of sense when you consider that the war itself played out on so many different fronts. Likewise, each of the war stories has its own emphasis, like land, sea, or air combat, and the belligerents involved have appropriate motives and objectives.

Each of the stories feels full and complete on its own, and they’re small enough that you can play through them each in a single sitting. Short cinematic sequences break up the combat and provide some additional context and character development, which seems to be a rare commodity in shooters these days. 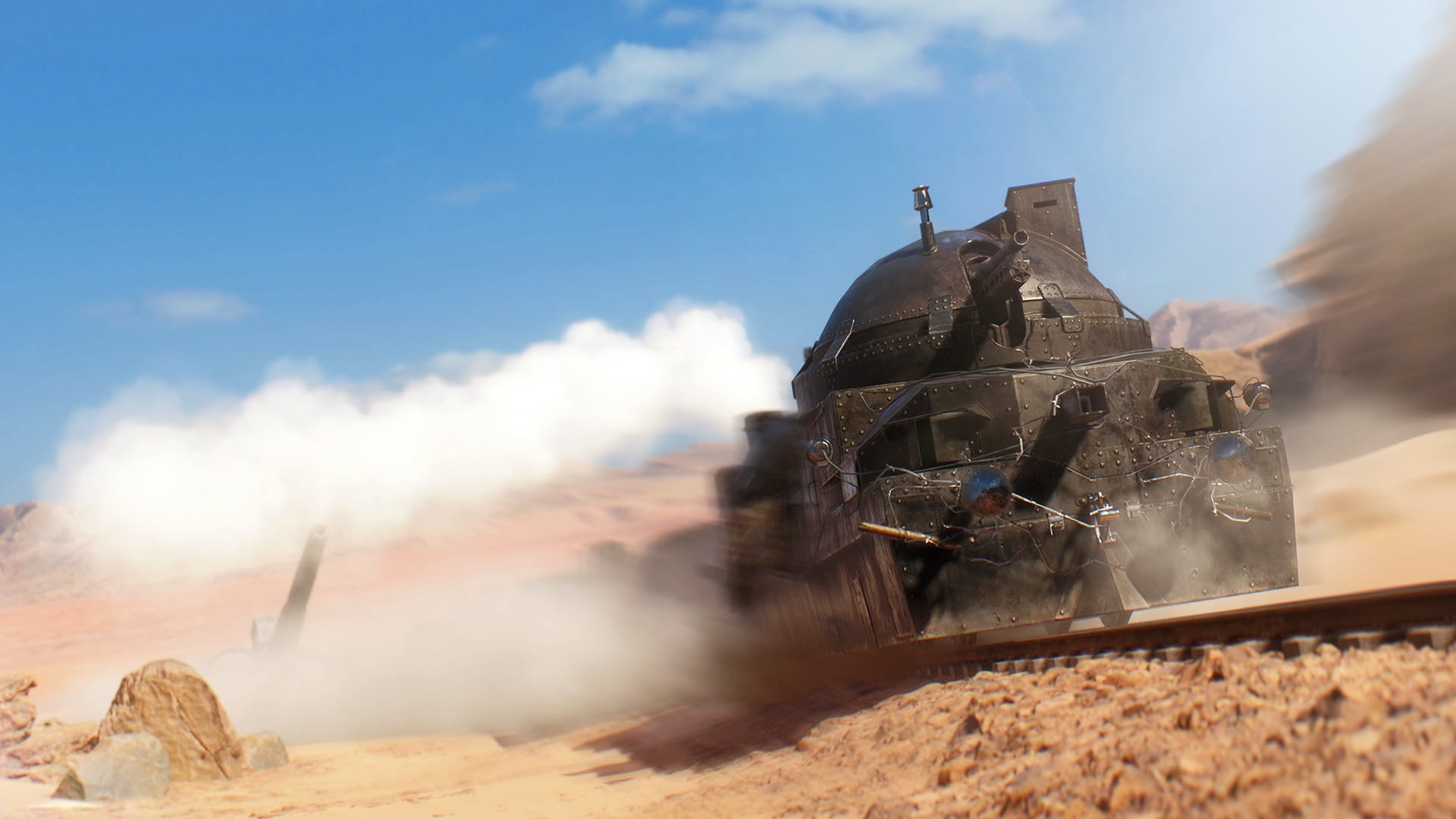 This brings me to one of the most interesting things about Battlefield 1: It’s clear from the very start that the game really wants you to care about human life. That sounds somewhat obnoxious given that the goal of the game is to mercilessly destroy your enemies, but the focus on the human aspect of war is immediately apparent, and that theme is present in every mission and mode the game has to offer.

Once you’ve polished off the relatively brief campaign, there is an endless amount of fun to be had in Battlefield 1’s multiplayer modes. There’s traditional team deathmatch, domination, and conquest modes, as well as an all-new “operations” mode. In this game variant, you play out full-scale battles of attrition, gaining ground or being pushed back depending on your team measures up to those you’re facing. Losing a battle doesn’t necessarily means you’ve lost the match, as attackers get several waves of reinforcements as well as game-changing “behemoths,” which are large vehicles like armored trains or zeppelins that can shift the momentum of the battle.

This is undoubtedly one of the most enjoyable ways to play Battlefield 1 multiplayer, and the sense of accomplishment you feel when crushing the enemy in battle is much greater than that of a simple deathmatch victory.

As for the mechanics of the game itself, Battlefield 1 feels very much like a traditional Battlefield game, perhaps even more so than Battlefield 4 (and certainly more than Battlefield: Hardline). Multiplayer battles are not the run-and-gun style you see in most modern shooters but tend to play out with long-range weapons—and with the aid of vehicles like tanks, planes, armored trucks, and motorcycles. Oh, and horses. 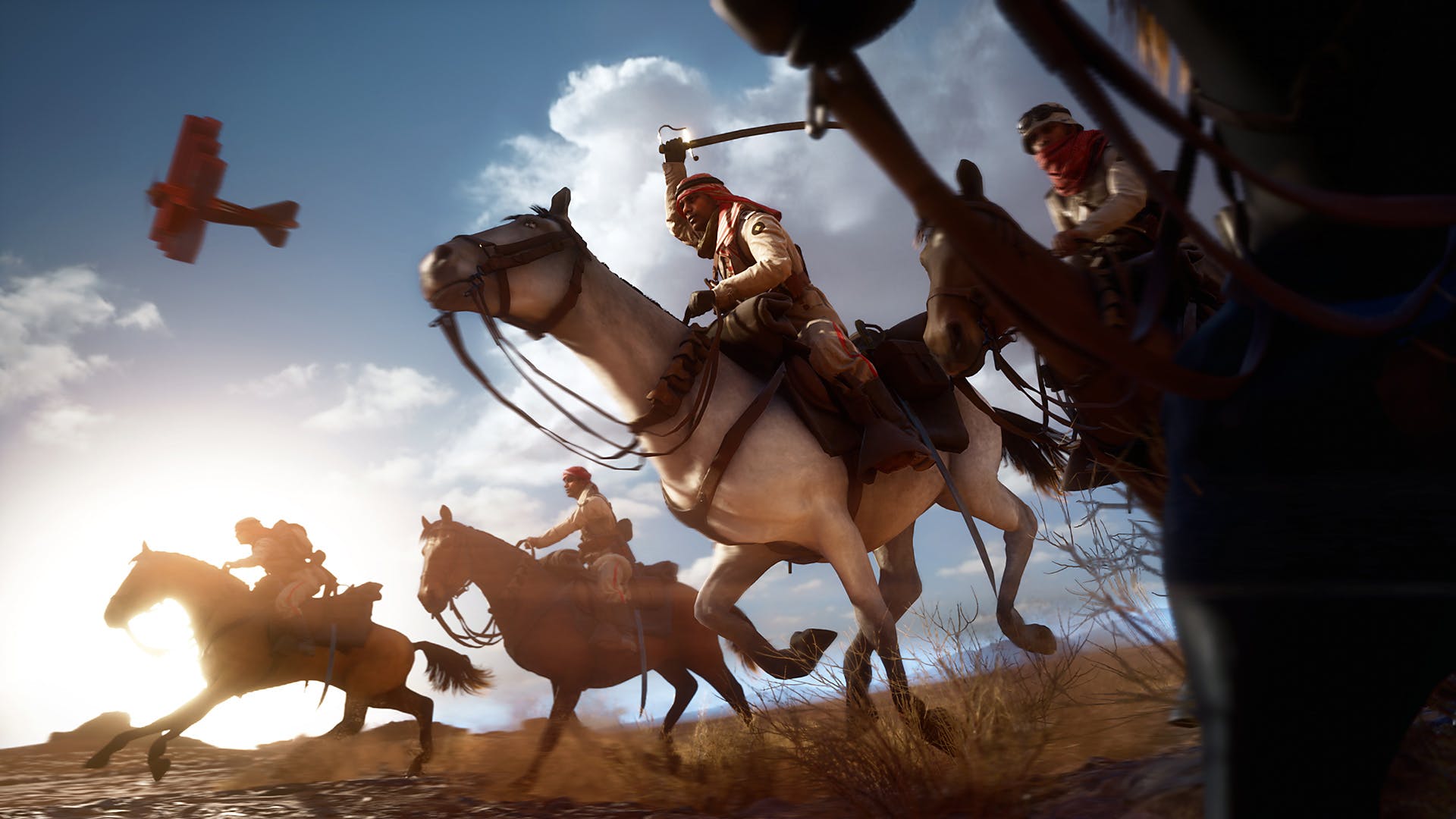 Loadouts are class-based, with scout, support, assault, and medic variants, each with its own gear. Medics can revive downed players, scouts have access to all the sniper rifles, support can resupply teammates, and assault can take out vehicles with great efficiency. In the matches I participated in, the mix of classes was fairly even, though some maps are obviously better for long-range engagements. Others are best fought with close-quarters weapons.

Even when playing on the same map repeatedly, the way the conflict plays out can vary greatly depending on factors like the weather. Fog makes it virtually impossible to be an effective sniper, and rain can make it hard to follow an enemy when firing from even a short distance. The Behemoths, when activated, can change the war as well, and when an armored train rolls into a contested point, it’s an unstoppable force.

In short, it’s an absolute blast to play, and even though the game launches with just nine multiplayer maps, there’s enough variety in the battle itself that it can feel fresh and new even after repeated trips to the front.

Now, normally when a game is this much fun, the graphics really don’t matter as much, but I’d be doing you a disservice if I didn’t say something about how gorgeous Battlefield 1 looks. Everything from the individual blades of grass that cover the hillsides to the way rain collects and drips on your gun barrel will make you wonder if it’s possible for a game to look any better than this. 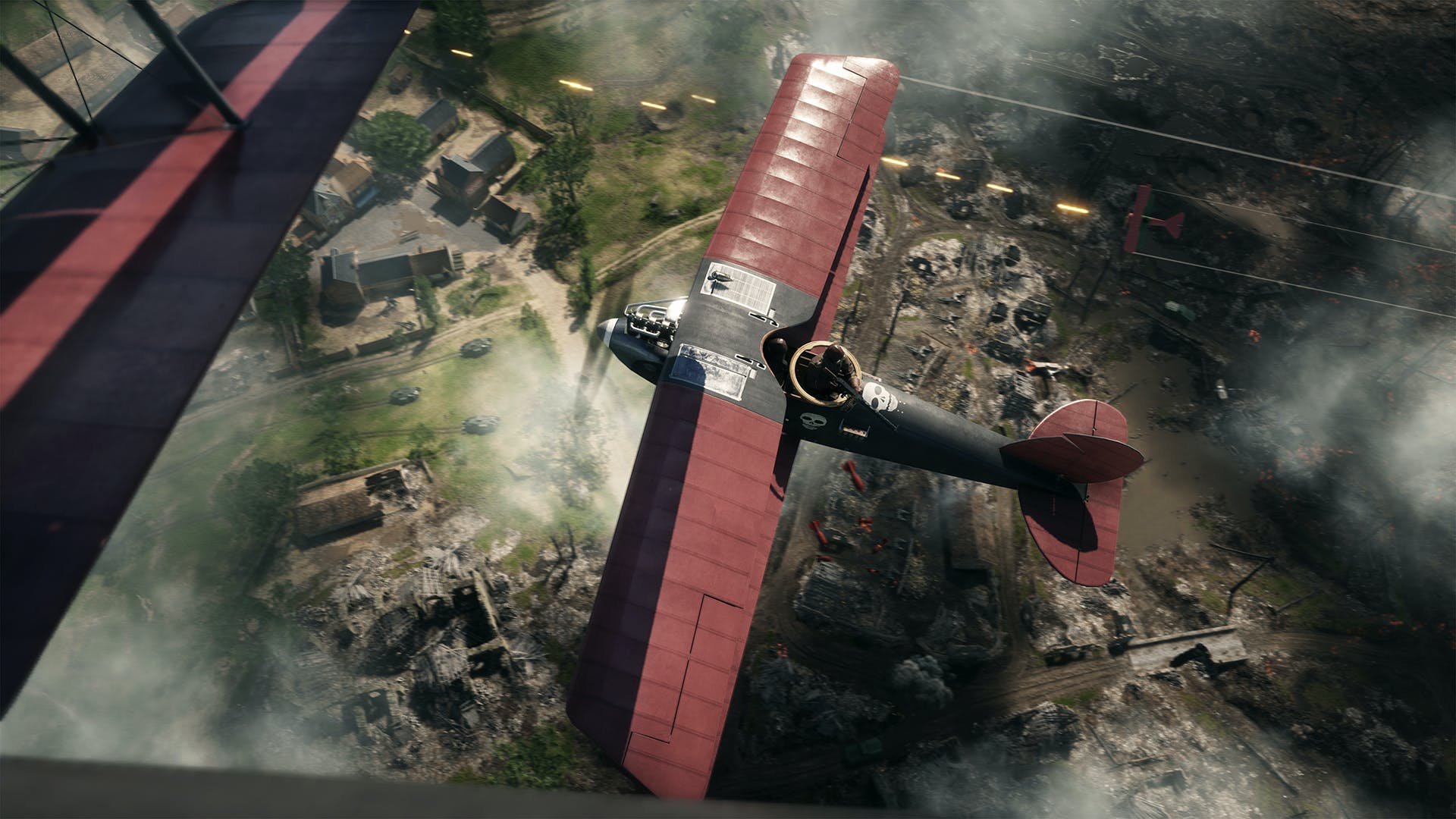 But for all the positives Battlefield 1 brings to the table, it’s not a perfect World War I experience, and that’s mainly because a lot of the stuff that happens in this game really wouldn’t have happened in World War I. Yes, the “when” and “where” of the battles are based in reality, but the “how” is almost always a stretch.

To prevent the game from being boring, by modern game standards, Battlefield 1 is packed with the most “fun” weapons that existed at the time. That means outfitting an entire crowd of soldiers with automatic weapons that certainly weren’t available in such numbers, depicting a zeppelin flying low enough to engage ground troops when that would have been a death sentence, and wearing full-body metal plate armor that would have made running and jumping an absolute nightmare. Is it accurate? Not hardly, but it sure is a lot of fun.

All things considered, Battlefield 1 is a refreshing, gorgeous shooter that breaks up the monotony of futuristic action games with solid mechanics and a setting that has never gotten the attention it deserves.