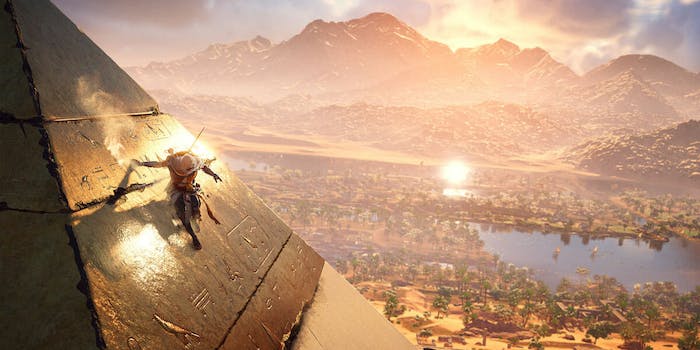 But you can expect extra content for 'Assassin's Creed Origins.'

Assassin’s Creed fans could be waiting a while between full game releases—but that’s not necessarily a bad thing.

Between 2009 and 2015, a new major Assassin’s Creed game came out each fall like clockwork. It became a bit much, to be honest. Peak Assassin’s Creed probably occurred in 2014, when we got two main installments on the same day, with Rogue and Unity. Neither scored terribly well with gamers or critics, resulting in tepid sales for the excellent Syndicate the following year. So Ubisoft took a year off to give extra care and attention to 2017’s Assassin’s Creed Origins.

The gambit paid off. The wait made fans hungry for another game in the series. And thanks to its thoughtful features and an extra year’s worth of polish, Origins became an enormous success. But it begs the question: Was skipping a year a one-time thing, or will it be the new normal?

Judging by yesterday’s earnings call with Ubisoft CEO Yves Guillemot, it sounds like the company will once again take its time with the next installment. Guillemot said the focus is currently on new downloadable content for Origins.

“You will be amazed by what will come in [Origins],” Guillemot said. “That’s the only thing we can say now.”

It’s possible there’s a Ubisoft team somewhere working to crank out a 2018 installment, but it seems unlikely. According to Guillemot, players are spending nearly twice as much time in Origins as they did in previous installments. Part of that is surely because it’s a huge game with more content than earlier ones. But another part of it must be that fans enjoy playing the game.

Ubisoft is already busily adding content to Assassin’s Creed Origins. The first expansion, called “The Hidden Ones,” launched in January. “The Curse of Pharaohs” is the second one; it’s set to release on March 6. A very different mode called “Discovery Tour” comes out on February 20. It removes combat from the game and lets players wander around Ancient Egypt while listening to educational audio tours.

If we have to wait two years for the next Assassin’s Creed game, so be it. If it’s as good as Origins, it will be worth the wait.