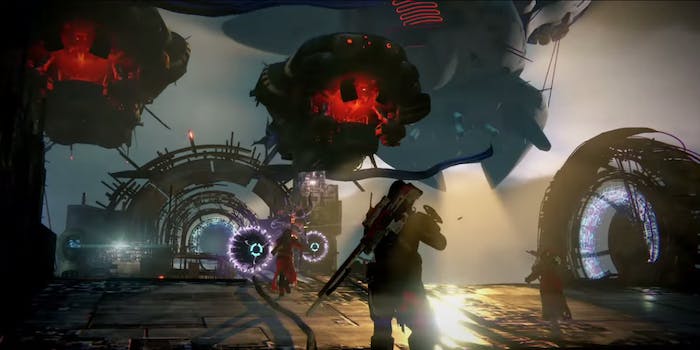 Why my Destiny review was completely right and totally wrong

How I learned to love Destiny for what it is—not what it was supposed to be.

When I finished my review playthrough of Destiny in September, I was furious. I had been promised a first-person shooter. What I got instead was a grindy, loot-based game.

That was eight months ago. Now, I’ve racked up more time in Destiny than in both Fallout 3 and Fallout: New Vegas combined, two of my favorite games of all time. I have 500-plus hours invested in the game, and I was more excited for this week’s release of the House of Wolves expansion than I’ve been excited for a game expansion in a very long time.

Destiny is Halo meets Diablo III meets World of Warcraft. It’s a triple-hybrid blend of first-person shooter, dungeon crawler, and massively multiplayer game that must have felt brilliant when Bungie first came up with the idea. And then someone at Activision probably said, “How the hell are we going to market this?” Destiny was labeled a first-person shooter, because people know what that means, and that’s the expectation I took into my review of the game. 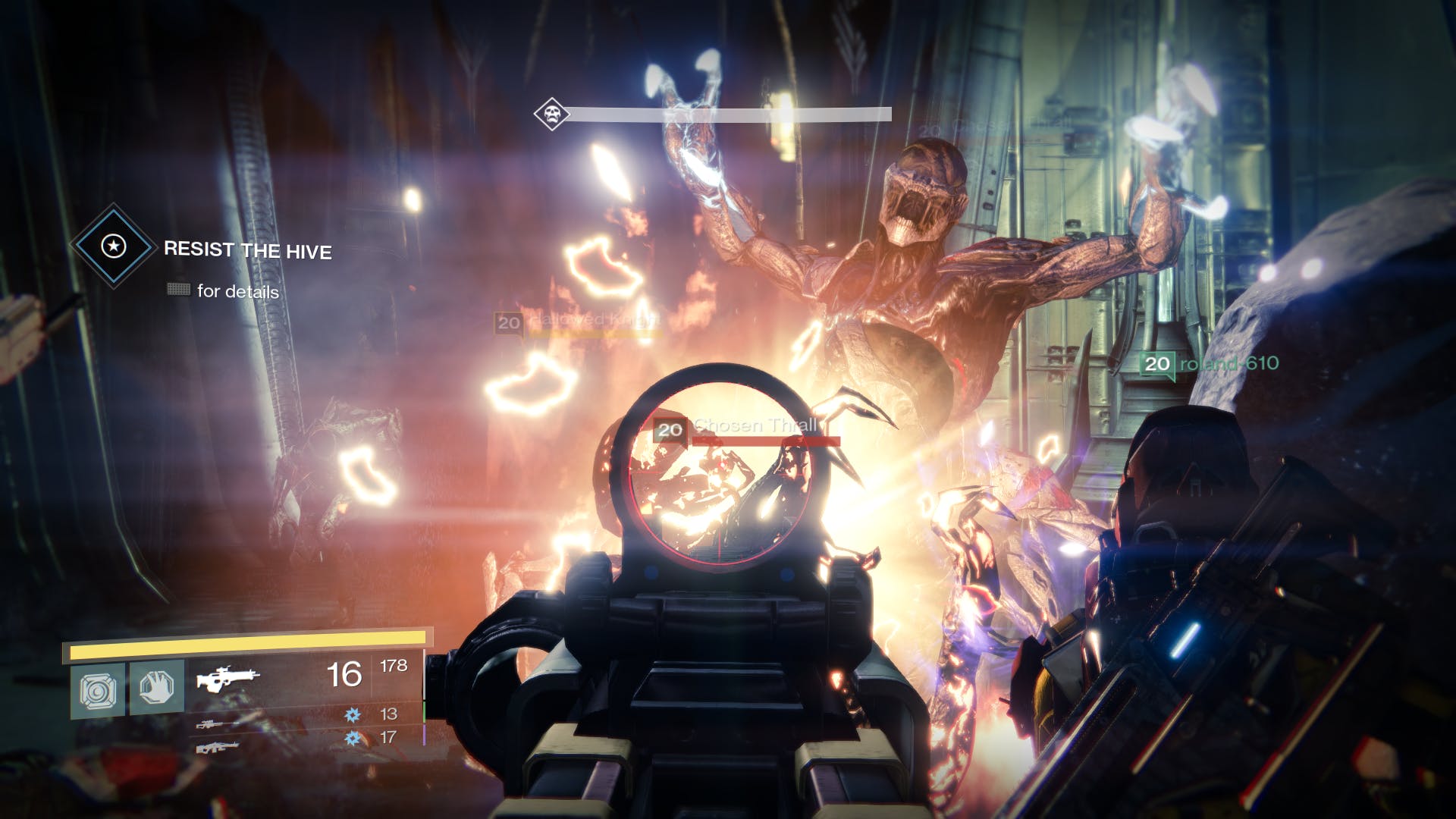 In Destiny, you traverse Earth, the Moon, Venus, and Mars shooting four-armed Fallen pirates, creepy undead-looking Hive monsters, relentless Vex robots, and huge armored Cabal soldiers. Then you run back to the Tower to turn in quests, and go back to the same four planets to kill the same four types of aliens.

After spending a few months on that grind and walking away with awesome gear, you graduate to content that you had previously not been powerful enough to tackle—missions that are much more challenging and satisfying. You wind up repeating this more challenging content as well, but it’s so much fun that you don’t care.

This is how MMOs work.

If you prefer to skip most of these trips back and forth to the Tower, you can invest your time purely in Destiny’s Crucible player-versus-player mode, but some FPS fans still don’t like multiplayer modes. The Crucible is its own kind of grind.

Weekly Nightfall Strikes are some of the most challenging content Destiny has to offer. They’re extremely difficult versions of Strikes, short missions that take 15-20 minutes to complete. The Weekly Nightfall Strikes pile on difficulty modifiers, like Juggler, which means no ammo drops for the weapon currently equipped, or Lightswitch, which makes enemy melee attacks devastatingly powerful, or Angry, which means the enemy does not back down no matter how much you’re pounding them with headshots.

I couldn’t even dream of attempting, much less beating, a Weekly Nightfall Strike until I teamed up with two veteran MMO players, one of whom had never played a first-person shooter in her life. All three of us had tackled Destiny’s grind like we would in any other MMO, so we were prepared with high-level characters and awesome gear. The Weekly Nightfall doesn’t stand a chance against us.

Trying the Weekly Nightfall with another set of friends I’ve been playing FPS games with for more than a decade has been a disaster. They were slow to get through Destiny’s grind—and who can blame them? They didn’t expect to be playing an MMO and dropped the game for months before finally giving it another try, largely spurred by me.

I can’t fault how my friends reacted to the realization that Destiny is largely structured around a level grind. I’ve ditched plenty of MMOs myself when the grind became too onerous. What kept me bound to Destiny were the elements of the game that spoke to the first-person shooter fan in me—Destiny has some of the tightest FPS controls I’ve ever enjoyed—and that Destiny takes place within a gorgeous world that continues to astonish me at a purely technical level.

Learning to accept, through the hundreds of hours I was putting into the game, that it made more sense to approach Destiny as an MMO and not a first-person shooter wasn’t enough to completely open up the game for me, however. There was one more roadblock based on genre misperception that I had to deal with.

If there is a story behind the Vault of Glass, Destiny’s first Raid, it escapes me. There are some really bad guys called the Vex. The Vault of Glass is supposed to have something to do with the Vex’s ability to manipulate time, but damned if I could tell you how. What I can tell you is that the Vault is like a puzzle box for which Bungie has still provided little training, other than a hint within some House of Wolves content added Tuesday.

It took the first group of Destiny players who beat the Vault about 10 hours to figure out the solutions to the puzzles. Even now that the answer key is on YouTube, it still requires a group of six players who are efficient and coordinated to conquer this Raid. The Vault is awesome.

The reason I didn’t finally beat the Vault for the first time until Sunday was my stubbornness about not playing Destiny with people I don’t know. This is one of my quintessential rules for enjoying first-person shooters: Never play with randos. Too many are kids who just want to trash talk, and that gets old fast.

Only once have I been able to get my regular group of gaming buddies together to make a run at the Vault, owing to a lack of playtime and tools necessary to tackle content that’s even more difficult than Weekly Nightfall Strikes.

So finally, in desperation, I broke my rule and used a website called THE 100. You register with your Xbox gamertag or PlayStation Network name and specify the kind of player you are looking to team up with, using factors like age, whether they are more serious or more into casual fun, and what time of the week they tend to play, among other variables.

THE 100 then slots you into a company of 100 like-minded players. You get email notices when someone in your company sets up an activity like a Weekly Nightfall or a Raid. You can sign up for the activity on THE 100 site, which gives you the participant’s gamertags, so you know who to hook up with in the game. Or, you can look for and join open activities set up by users outside your Company.

The very first time I jumped into one of those open events, a run on the Vault of Glass, we beat the Raid in 90 minutes. People got along and cooperated, because I’d been able to sift for the kind of players I wanted to play Destiny with.

That’s when I realized what an idiot I’d been. In every MMO I’ve ever played—and I’ve played a lot of them—I’ve had to step outside the game itself and find guilds or clans to join, to be able to organize with people for endgame content. Destiny is an MMO, so using sites like THE 100 is precisely as it should be. 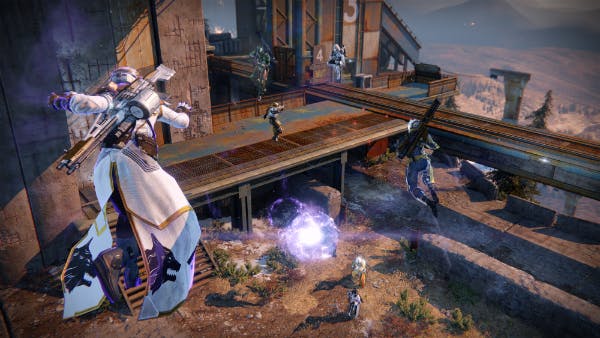 The description of Destiny on the Xbox store reads “Destiny is a next generation first-person shooter featuring an unprecedented combination of cinematic storytelling, cooperative, competitive, and public gameplay, and personal activities that are woven into an expansive, persistent online world.”

Short version: Destiny is an MMOFPS. The convoluted descriptions and obfuscation of Destiny’s marketing feel increasingly silly the longer I play the game.

I do understand why Activision and Bungie avoided the MMO label, even after Destiny’s public beta concluded and the writing was on the wall. Calling a game an MMO can be poison, conjuring images of monotonous grinding, Raids that require lots of players and that can be difficult to organize and coordinate, and obsessing over gear—all of which are present in Destiny. Had Destiny been advertised as an MMO from word one, sales could have been disastrous.

On the other hand, that upfront marketing could also have prepared the audience to appreciate and hail what Bungie has accomplished. Tabula Rasa and Huxley tried to blend MMOs and shooters and failed. Firefall is described as an MMOFPS, but there’s very little to do and it lacks polish. Warframe and Defiance mix shooters and MMOs but they’re third-person action games, which are different animals. Planetside 2 is a first-person shooter with thousands of players, but it doesn’t resemble an MMO at all.

The PlayStation trophy awarded for completing a Raid has only been earned by 20 percent of Destiny players on both the PlayStation 3 and PlayStation 4, and even fewer players have ever equipped a full set of high-level gear. That means only a fifth of everyone who’s ever played Destiny on the game’s most popular platform have reached the end game and experienced the best content in the game—content that represents what Destiny actually has to offer. And I would bet the thing getting in the way of players enjoying this content has been Destiny’s grind.

Bungie has addressed this in part with the House of Wolves expansion, which includes a major overhaul to how Destiny’s leveling system works. Players can outright buy armor that will get them to Level 32, and buy weapons that do appreciable amount of damage without needing to first be leveled up. How long it takes someone to accrue the required amount of currency will still depend on how good their gear is because higher level Strikes award more currency. Getting ahead of the grind’s curve is still an issue, but this at least is a more straightforward path to leveling than Destiny’s pre-Wolves system.

Destiny players now need Etheric Light to level up their gear, and Etheric Light is not easy to come by. Gear continues to trump player skill as the necessary component to tackle Destiny’s endgame content. One grind has been replaced with another. Maybe without a grind, there is no Destiny. The inherent challenges involved in trying to blend skill-based FPS games with gear-based MMOs have gone nowhere with House of Wolves.

At least no one ought to be in the dark now as to what they’re getting into when they buy a copy of Destiny, and hopefully they can from the very beginning appreciate what the game represents. Bungie took multiplayer first-person shooters, a genre that had previously existed almost entirely on the PC, and made it work on consoles with Halo 2. Now the studio also taken MMOs, another genre that’s predominantly on the PC, and adapted it to fit console platforms.

That’s an accomplishment every gamer should be able to appreciate.